Ask Question
Asked 10 days ago
Modified today
Viewed 82 times
4
$\begingroup$
The bounty expires in 20 hours. Answers to this question are eligible for a +50 reputation bounty. Krang Lee is looking for a canonical answer.

I am synthesizing new polymer that has not been reported before. The structure of the polymer is based on indacenodithienothiophene unit and thiophene. I used Stille polymerization. As monomers, I used distannyl-indacenodithienothiophene unit and 2,5-dibromothiophene. 2,5-dibromothiophene has bulky tertiary amine group on 3-position. Basically I use toluene:DMF (4:1) as solvent and set temperature to 120 ℃.

After the reaction is complete, first I dilute the reaction mixture with dichloromethane, and filter it through Celite pad to remove decomposed Pd residue. And then I concentrate it by rotovap (in this procedure, of course DMF is not evaporated well). Add minimal amount of dichloromethane, and add drop by drop to the 200~300 mL of methanol. Then methanol becomes cloudy and most of the grains are sticked to the wall of the flask. 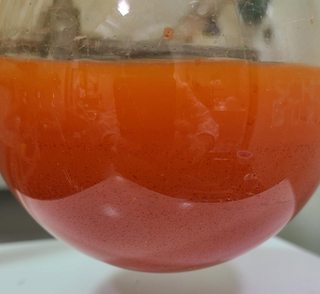 When I search for this problem, I found that some people say that the cloudy methanol means insufficient polymerization, so there are many oligomers or low-weight compounds. Do the sticking to the wall occur by same reason? If I try to filter the cloudy methanol by reduced pressure filtration, then the filter paper is clogged like this: 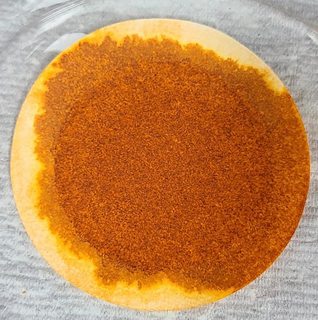 Should I try longer reaction time, like 96 h or 120 h? Also, our lab doesn't have the Schlenk line, so it cannot afford complete inert atmosphere. Then, if I consider the decomposition of the Pd catalyst by air, does the insertion of additional Pd catalyst (and ligand) during the reaction help?

Is this your PhD you are working on ? While it feels like I am doing your homework I cannot resist chiming in.

I worry that if you have oxygen contamination of the mixture which causes the palladium chemistry to be terminated then the chemical reaction which terminates the palladium could then form some organic product other than the one you want. You need to consider which point in the catalytic cycle the palladium is most susceptible to poisoning with oxygen. I think that the Pd(0) complex which is a POSH version of [Pd(PPh3)4] will be the resting state of the catalyst, if this decomposes either to a palladium mirror or to a palladium(II) complex like [PdBr2(PPh3)2] then this will just result in loss of activity of the catalyst. If the oxygen does something at a different stage in the cycle it could be worse, then the oxygen could cause the formation of a different product.

I know from Monsanto acetic acid process chemistry that the RDS for that reaction is the reaction of methyl iodide with the Rh(I) complex, while with BP’s Ir based process the oxidative addition is not the RDS. There the more heavy Ir as it has a stronger C-M bond has different chemistry. I worry that a Pt catalyst would be a lot more expensive and it would also be more sluggish.

I suspect that adding more of the palladium catalyst will not do any harm as the poisoning of the system by oxygen or the formation of the palladium mirror which I used to have sometimes on glass flasks will not do too much harm. I note that the colour is similar to many palladium compounds, I would be inclined to use thiol-SAMMS (a mesoporous silica with a monolayer of mercapto propyl groups) to remove the palladium which is still in solution from the solution of the polymer.

I would suggest that you take great care with DMF, I hate the stuff. It is viscous and toxic. I say it is an equal opportunities monster. I know that it is linked to testicular cancer in men and I am sure it does horrible things to women. I know it is a teratogen so keep away from it if you are pregnant. Some chemical companies will not allow any women to work with it. This is not a totally unreasonable thing, I know that some nuclear companies keep women under an even stricter set of rules for radiation than they do for XY chromosome owners like me.

I think that you should try to get a nitrogen / vacuum line to do this work, the problem is that you are making a polymer. If you are trying to make a long chain polymer then if a small fraction of the repeat groups are changed then you will have a very different chain length and the properties will be very different. I would suggest sparging the mixture with argon before you add the catalyst to get the oxygen content down as low as possible before you heat the mixture up. One option would be to bubble the thing with argon at room temperature for an hour or so, add the catalyst, carry on bubbling with the argon and then start to heat up.

After the reaction time, I would allow the mixture to cool and then I would tip it into water. The sincere hope is that the majority of the DMF will remain in the water while the polymer will not. I would then redissolve in dichloromethane and then use methanol as an antisolvent.

You might also want to consider using electrochemistry as an alternative to the Pd chemistry, I think it might be possible to make a polythiophene by gentle oxidation on the anode. I suggest you read about the work of Karl Ryder, he has got into deep eutectic solvents now but when he was in Aberdeen around 2000 his group there were making things like polythiophenes.