Do lone pairs on substituents (e.g. in aniline) count towards Hückel's rule?

Why is aniline aromatic? Doesn't it have 8 π electrons including the lone pair on nitrogen, thereby violating Hückel's rule?

The way I see it, there are 6 π electrons from the benzene ring, and an additional 2 from the $\mathrm{sp^2}$hybridized nitrogen.

I am suspecting that I am mis-applying Hückel's rule. I asked an instructor today and the only rationalization he had to offer was that "we just don't count those electrons on the nitrogen" ... which is deeply unsatisfying. He still insisted that aniline is aromatic. Can someone offer an alternate, more through explanation?

The reason for only using the ring electrons traces back to the origin of aromaticity. Take a look at the π-orbital energy levels of benzene (figure taken from p 36 of Fleming, Molecular Orbitals and Organic Chemical Reactions, Reference Edition): 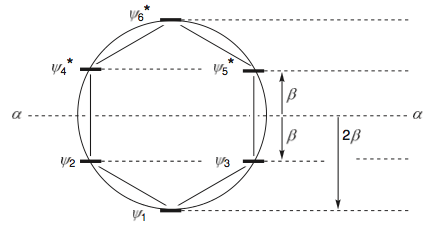 Here, $\alpha$ is the energy of an isolated p-orbital and $\beta$ is the stabilization energy of the π-bond in ethylene. You can see that for benzene you get the best stabilization if you have 6 π electrons ($4n + 2$ for $n=1$) in the system because then you fill the stabilized MOs $\psi_1$, $\psi_2$ and $\psi_3$ which are lower in energy than an isolated p-orbital and gain the maximum stabilization energy possible. If you'd have more electrons in the system you would have to fill the destabilized MOs $\psi^{*}_{4}$, $\psi^{*}_{5}$ and $\psi^{*}_{6}$ which would cost a lot of energy because of the large energy gap between the bonding and antibonding MOs.

Now, what happens if you add a cross-conjugating substituent to the ring. This can be seen in the (Huckel-)MO-diagram of styrene (Fleming, p 71). 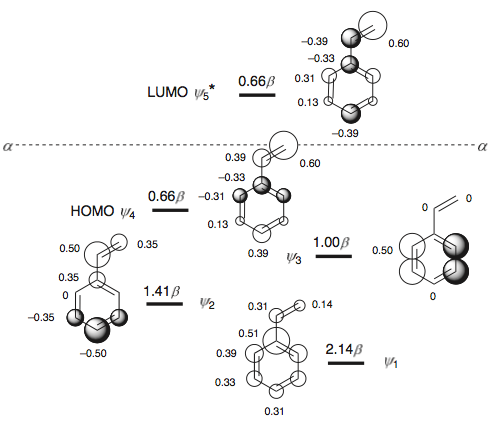 The main effects of the substituent are that the degeneracies of some orbitals are lifted and that the orbital energies shift a bit, especially those of HOMO and LUMO are of interest. In the case of styrene the HOMO lies higher in energy and the LUMO lies lower in energy compared to benzene. Now there are 4 stabilized energy levels instead of 3 - any electron that occupies one of those levels will lead to a stabilization of the molecule. But that is nice and well as you get 2 electrons from the substituent which will want to occupy one of the 4 levels and that leaves you with 3 levels that have to be occupied by ring electrons. Thus, your system will be most stable if the π-system of the ring contains 6 electrons, exactly like in benzene. Any more than 6 electrons will lead to destabilization as there is still quite a big HOMO–LUMO gap (even though it is smaller than in benzene).

The argument I made for styrene will remain valid for other molecules with different substituents (like aniline). The MO scheme of aniline will look a little different but the essential features should be the same.

Hückel's rule (or the $4n+2$ rule) suggests that systems with $4n+2$ π electrons will be stabilized (aromatic), while systems with $4n$ π electrons will be destabilized (antiaromatic). It was written with planar, monocyclic, π-systems in mind. Applied without care, it would suggest that cyclooctatetraene with 8 π electrons is antiaromatic, yet the molecule is a stable, ethylenic like, cyclic, polyolefin - because it is non-planar (it exists in a tub shape conformation). 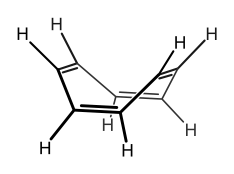 The Hückel rule also has trouble with polycyclic π systems, as we discussed in your question about pyrene. The rule was not intended to take substituents into account at all. We can say that furan or pyrrole has aromatic properties because the lone pair on oxygen or nitrogen contributes to the π-system. But note that in these cases the oxygen or nitrogen is part of the monocyclic ring, not a substituent appended to the ring.

In the case of aniline, the molecule is aromatic. The benzene ring is, in agreement with Hückel's rule, aromatic. The lone pair of electrons on the amino substituent clearly interact with the π system of the benzene ring as evidenced by the reduced basicity of aniline in comparison to ammonia. But the amino group is a substituent attached to the ring and the lone pair on nitrogen is not counted as part of the $4n+2$ system. The same concept applies to phenol, halobenzenes, etc.: these substituents interact with the benzene ring, but their lone pairs are not part of the electron count when Hückel's rule is applied.

I agree with you that in aniline there are 6 π electrons from the benzene ring, and an additional 2 from the lone pair of the amine group. But aniline is still aromatic, because there are only 6 π electrons resonating, i.e. the 6 π electrons in the benzene ring are conjugated in a plane perpendicular to the ring. While the additional lone pair of electron on the nitrogen atom cannot resonate with them, as it is not in that plane perpendicular to the ring.

As Thomas Aquinas declared in the title of one of his most famous essays, "Sic et Non". Many aspects of chemistry feature classifications that are taught as definitively affirmative or negative, but in reality they show blurred lines of demarcation. Thomas Aquinas wrote his essay on theological questions, but the same answer might apply to such chemical questions as whether certain basic compounds are alkalies -- and whether and how electrons are conjugated into delocalized pi systems.

The formal lone pair on nitrogen either is or is not conjugated into the pi system of aniline. Wikipedia describes the ambiguous, intermediate situation:

The amine in anilines is a slightly pyramidalized molecule, with hybridization of the nitrogen somewhere between sp³ and sp². The nitrogen is described as having high p character. The amino group in aniline is flatter (i.e., it is a "shallower pyramid") than that in an aliphatic amine, owing to conjugation of the lone pair with the aryl substituent. The observed geometry reflects a compromise between two competing factors: 1) stabilization of the N lone pair in an orbital with significant s character favors pyramidalization (orbitals with s character are lower in energy), while 2) delocalization of the N lone pair into the aryl ring favors planarity (a lone pair in a pure p orbital gives the best overlap with the orbitals of the benzene ring π system).[1][2]

Of course, aniline definitely shows aromatic character experimentally, for instance in its proton nmr spectrum, but that does not mean there must be only six conjugated pi electrons confined to the ring. Alternatively, including the nitrogen "lone pair" into the conjugation would put the molecule outside the scope of the $4n+2$ rule because that rule applies only to an exact ring of conjugated pi electrons. Given this limitation on the $4n+2$ rule, aniline could be aromatic whether the nitrogen lone pair is conjugated or not.

1
Does the amine group participate in resonance in aniline?
1
Why is styrene an aromatic compound?
36
Is pyrene aromatic despite failing Hückel's rule?
27
What is the justification for Hückel's rule?
12
Is nitrogen of aniline sp² or sp³ hybridized?
8
Can a cyclic amine form an amide?
5
Do the π-electrons from the C=O bond in tropone contribute to Hückel 's rule?
-1
Is Magnesium Oxide alkali
1
Generalizations regarding functional groups on benzene ring