The Schlögl model can be represented as follows:

The chemical reactions can be written in ODE form:

The concentration of stationary states does not evolve, therefore $\dot{C}_{X} = 0$:

In order to find the stationary states, we proceed the following manner:

Ilie et al give a numerical example that has two steady states. Here are the parameters (ignore the propensities, I think they are for the stochastic models):

with $C_A$ set to $\pu{1E5}$ and $C_B$ set to $\pu{2E5}$. Depending on the value of the initial concentration of intermediate, you get one of two possible steady states (figure from the same paper, I did not numerically solve myself): 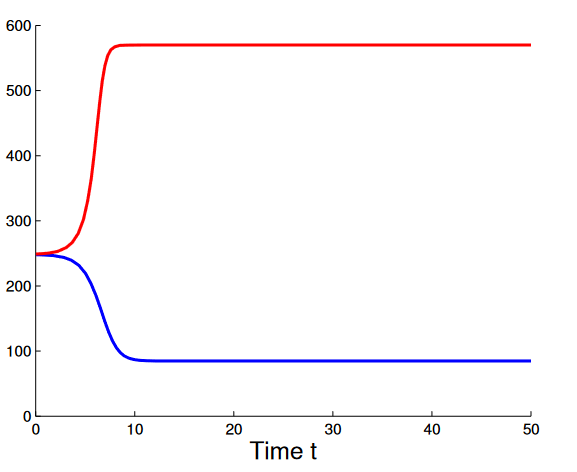 In our context, the y-axis shows the concentration of the intermediate X. If you want to know whether the system is capable of reaching equilibrium (with fixed concentrations of A and B), use the criterion

For the given set of parameters, this is not the case, so it is not at equilibrium (also, you would not expect two possible steady state concentrations of X if it were at equilibrium).

Because the ODE form of Schlögl's model is a cubic, there can be one, two or three steady states for a given set of parameters.

The OP does start out with an expression containing concentrations cubed, so unless some terms cancel out during differentiation, I would expect a different sort of solution for the steady state concentration.

You can check by testing one of the following:

as long as (3) is also true. I'm not attempting this because I have trouble understanding the derivation and the result given by the OP. Specifically, I am puzzled by the assumption that

Why would the steady state concentration be independent of one of the rate constants? That is counter-intuitive and requires some explanation.

You have to solve the cubic equation to find the deterministic values for the equilibrium values, or numerically integrate to get the time profile, but then $k_1$ is divided by 2 and $k_2$ by 6 to relate the stochastic calculation to the usual rate equation. This is because the propensities can be approximated when the number of molecules becomes v. large.

which has roots at $566.9, 247.6, 85.5$. The middle value is a 'barrier' that the deterministic equations (i.e. normal rate eqns) cannot cross. (When the parameters as such that they produce only one real root then only one equilibrium will exist).

You can see the three roots in the plot below as horizontal lines. 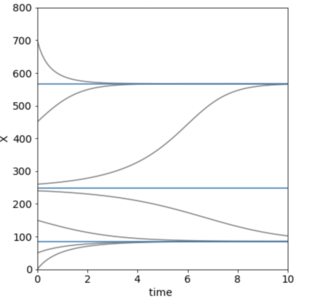 The stochastic calculation is very different as there is a chance to rise or fall to an equilibrium value (a root of the cubic) and the barrier can be crossed or recrossed as at each step as there is a random probability of going one way or the other.

The second plot shows this and I have chosen to illustrate that it behaves much as the deterministic plot does, but not all do as can be seen the the third plot. 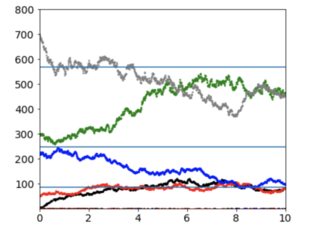 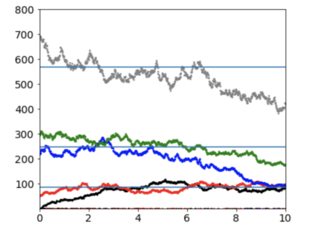 2
Using Arrhenius equation to calculate the ratio of two reaction rates
10
What kind of equilibrium constant we use for Gibbs free energy and Van't Hoff equation?
8
What are the possible concentration pathways for a 3-species system?
3
Reaction Kinetics and Stoichiometry -- Mass conservation
2
Quasi-steady state hypothesis application
2
Determination of the integrated rate equation for a reaction
3
Why are Alcohol Dehydration Reactions Favored by High Temperatures?
13
Has IUPAC been inaccurate in their 1994 definition of kinetic stationary state?
2
Finding stationary solutions and verifying differential equations
4
Equilibrium Constant & Rate-Determining Step