By what mechanisms can molecules with the same empirical formula be so different?

I understand the difference between empirical and chemical formula. But I always thought that compounds and molecules took their specific shape because it's the lowest energy configuration. How then, can fructose ($\ce{C6H12O6}$) and formaldehyde ($\ce{CH2O}$) both exist? If for example formaldehyde had overall the smaller energy, why then wouldn't fructose just decompose in 6 $\ce{CH2O}$ molecules? What makes both of those molecules so stable?

I guess this is a very general question of what makes certain elements combine the way they do to form compounds.

What makes both of those molecules so stable?

This is a fundamental question. Let's start by looking at the following diagram; a chemist would call it a "potential energy diagram." The y-axis shows the energy of a molecule as it travels along the reaction coordinate (x-axis; transforms, reacts) from the starting material on the left to the product on the right.

Notice that there are 3 "potential energy wells" (valleys) in the diagram, these reflect molecules that are stable enough to have a finite lifetime. Notice too that to move from one well to another, an energy barrier must be surmounted.

Millions of molecules are stable at room temperature, but if you supply enough energy to the system (heat them for example) they can all transform into other compounds. At room temperature there are high enough energy barriers separating fructose and formaldehyde and they will both be stable in a jar, but under more energetic conditions such transformations might be feasible.

I guess this is a very general question of what makes certain elements combine the way they do to form compounds.

At the fundamental level, I think, a good answer to this question would be the principle of minimum potential energy, which basically states that a system has a tendency to be in a configuration that minimizes its total potential energy. (Please, note the word tendency!) For the case of molecules it means that if forming a molecule out of atoms lowers the potential energy comparing to the situation when these atoms are infinitely far apart of each other, than there is a natural tendency for this molecule to be formed.

But there is a one important detail that complicates matters: given some set of atoms, there is no guarantee that there exist only one possible arrangement of them which minimizes the potential energy. In fact, the situation is usually the opposite: there are many different minima in the potential energy corresponding to different possible arrangements of the same set atoms. Often we can clearly identify one global minimum (the lowest one) and call all other minima local minima. 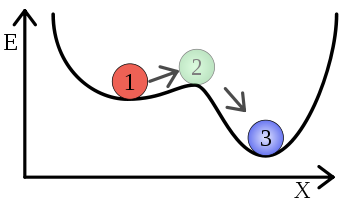 Now recall that (as I noted at the very beginning) the principle of minimum potential energy only tells us that there is a tendency for a system to favour a configuration with the lowest potential energy (i.e. $\ce{C6H12O6}$ out of two choices we discuss). But starting from $\ce{6 CH2O}$ the natural tendency to form $\ce{C6H12O6}$ would not necessarily be realized in reality if the barrier between these configurations is relatively high in a sense already mentioned. So, it might be the case that at, say, room temperature, most of the $\ce{CH2O}$ molecules do not posses enough kinetic energy to be converted to potential energy to overcame the barrier. But you can increase the amount if kinetic energy of $\ce{CH2O}$ molecules by rising the temperature, so that the system will roll to overcome the barrier. Chemical reaction will take place, although, I'm not sure that these two ($\ce{6 CH2O}$ and $\ce{C6H12O6}$ are directly connected). But conceptually, the situation is similar to just pushing the ball from the picture above. :D

Not the answer you're looking for? Browse other questions tagged physical-chemistry bond stability or ask your own question.

4
Could you estimate the rate of reaction from the chemical structure of the reactants? If so, how?

21
What is a rigorous definition of gas volume, and how is the Van der Waals equation derived?
9
How to determine the empirical formula for an unknown iron oxide?
4
What is physically responsible for different compounds with the same types of atoms?
4
Hybridisation and the Schrödinger equation
7
Do bond lengths vary across molecules of the same kind?
5
Particle in a box with different barriers between two molecules