How is the entropy of mixing related to chemical reactions in solution?

When calculating the Gibbs energy of reaction for reaction mixtures at arbitrary concentrations, you use the following expression: $$\Delta_\mathrm r G = \Delta_\mathrm r G^\circ + RT\ln Q$$ The term $RT\ln Q$ has to do with the entropy of mixing, we are told.

How does that work for reactions that are continuously mixed? If I have a reaction like

the reactants themselves are already a mixture. In fact, when there is a solvent, even a single reactant is part of a solution, i.e. already in a mixture. If (hypothetically) the reaction goes to completion, you still have a mixture. So why do we have to consider the entropy of mixing if the reaction mixture is already mixed?

So, I am gonna use the most basic definition of entropy - the statistic one

$\Omega$ is the total number of microstates possible.

In your case, different microstates can be formed by arranging momenta , energies and also by arranging POSITIONS as any molecule can be found at any possible "position" in a solution.

I will use basic principles of Permutations and Combinations to find $\Omega$.

The total number of molecules remain same in your example , and is (a+b+w) N0 , where N0 is Avogadro's number , and w is the number of moles of water.

Let me simplify the model by assuming there are (a+b+w) N0 positions available. Any molecule can "sit" at any position and can have any of the available value of momentum and energy. Changing either of position or momentum of any one molecule will lead to a new microstate.

But there's a catch. Suppose molecule 1 (m1) sits at position r1 and has energy E1 , momentum p1. Another identical molecule (i.e. the same compound) m2 has position r2 , energy E2 , momentum p2. If I exchange all - their positions, energies and momenta - I will not get a new microstate. But if m2 was not identical, it would surely have resulted in a new microstate.

Now , I start placing the molecules randomly ( there are just A , B and water present for now). How many unique arrangements can I have only due to virtue of positioning? That I can easily calculate. It will be

Now, after time t , I again do the same.
The number of arrangements of energies and momenta would still be same , i.e. , Z .

But, the number of arrangements due to positioning will now be ,

This is the increase in entropy due to "mixing".

I even plotted a graph to verify. Here's the graph.

I didn't know how to approximate its derivative (as the graph is broken when viewed closer) So I instead compared the graph with another one made by integrating Rln(K/Q). Both come out to be same at some value of K. This way, we have also calculated the Equilibrium Constant :)

NOTE: In the graph, I have also considered change in "Internal Entropies" apart from Entropy of Mixing. This "internal" entropy arise due to arrangements possible within a molecule. It is characteristic of a given compound.

The Black graph is the one made by integrating Rln(K/Q) and the Red haze visible behind it is the graph made by the formula we just derived. 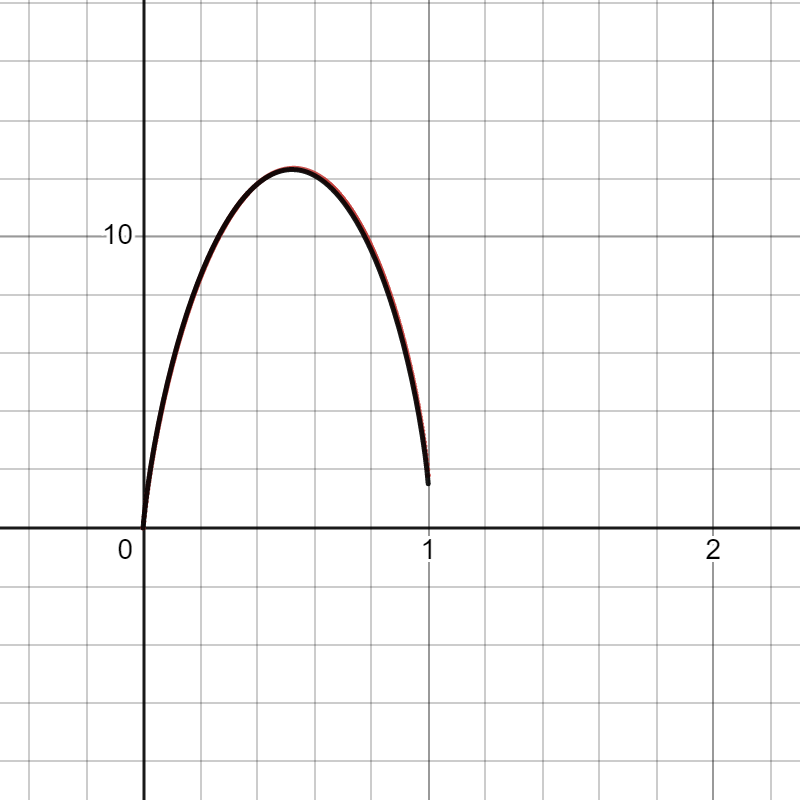 I'm a little unsure exactly what you are looking for but I try to show the connection between the Gibbs energy and mixing energy as reaction proceeds. We can start with the chemical potential $\mu$ and calculate the Gibbs function. Thus,

where $P$ is the total pressure, ($P^0$ is unit pressure to make the log dimensionless and is assumed to be included from now on), $x_i$ the mole fraction of species $i$ and $\mu_i^0$ is a function of temperature only, i.e independent of composition so is unchanged as the mole fraction changes $x_i =0\to 1$.

In the reaction $A+B=C+D$ the Gibbs function is

and if we assume a perfect gas mixture, using the first equation produces

The first two terms (in square brackets) is the total Gibbs function for the four gases as if each is in a separate container at pressure $P$, the term on the right is therefore the free energy of mixing, $RT\sum_i n_i\ln(x_i)$ and if divided by temperature is minus the entropy of mixing.

and without loss of generality choose the pressure to be unity, then with some rearranging,

When $n_a=1$ so that only reactants are present we find that $G=\mu_a^0+\mu_b^0+2RT\ln(1/2)$ where $2RT\ln(1/2)$ has to be the free energy of mixing before any reaction has occurred and similarly when $n_a=0$ the same energy of mixing is present for the products there being only two species present in either case. Elsewhere both terms contribute to the mixing free energy.

The shape of the plot of $G$ vs. $n_a$ is due primarily to the log terms, if this term were absent the plot would follow the line W-V, see figure. The lower part of $G$ shows that the free energy at equilibrium becomes even smaller than that if there were complete conversion to products, because here there are four species in various proportions not just two. Entropy of mixing depends on the mole fractions is maximal at equilibrium.

The position of the minimum, and so the equilibrium, is determined by $\mu_a^0+\mu_b^0-\mu_c^0-\mu_d^0$ which is the difference in free energies between reactants and product in their pure states. This is the case because the mixing terms are symmetrical in $n_a$ but the sloping energy terms biases this. The minimum can be calculated by differentiating $(\partial G/\partial n_a)_{T,P}=0$ or more easily and just as generally via

and substituting for $\mu_i$ and mole fractions leads to the solution for $n_a$ at equilibrium just as if $G$ had been differentiated.

What this shows is that the same relationship exists at equilibrium as in the chemical equation $A+B=C+D$ from which the equilibrium constant is normally obtained and shows the connection to the entropy of mixing as the reaction proceeds. The reaction is therefore seen as a competition between attractive forces causing the reactants to form products on the one hand and increasing entropy forming a mixture on the other. 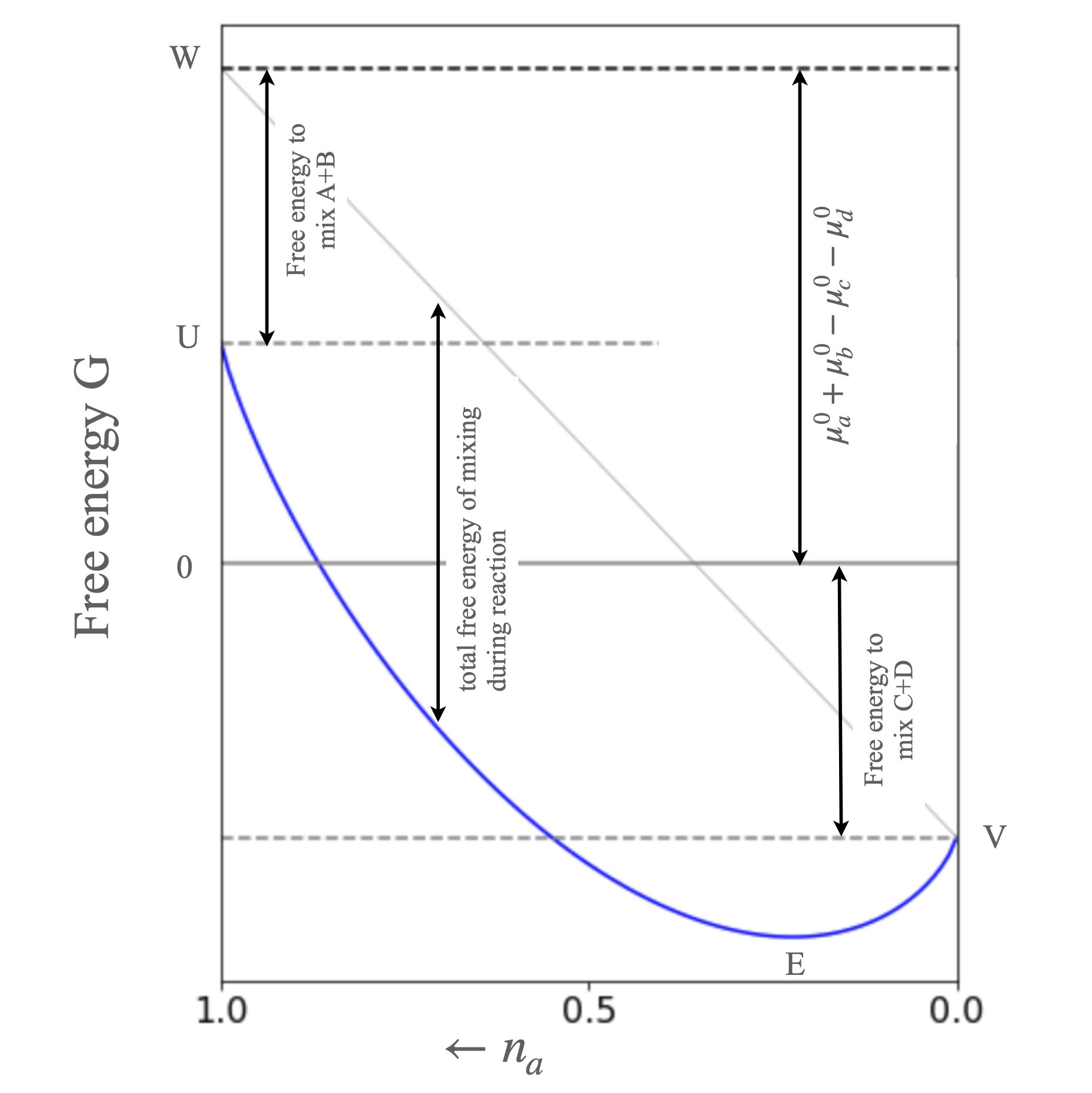 Gibbs function of a reacting system

5
Description of a van't Hoff apparatus
3
Is the entropy change positive or negative in this reaction?

6
Can one predict the entropy change for aqueous phase reactions without calculation?
14
What is the difference between ΔG and ΔrG?
6
Derive expression for internal energy of mixing and entropy of mixing using statistical thermodynamics
0
Deriving the entropy of mixing of a non-ideal solution
14
Why can't a reaction go to completion?
3
Rationalising an apparent inconsistency in the determination of reaction spontaneity