I'm curious if it's possible to chemically hydrogenate flaxseed (linseed) oil. I've never seen it in hydrogenated form. Given its quality as an excellent wood protectant, I figure it would be easier to apply as a paste. In fact, there's a popular product on the market which has a paste-like consistency called Odie's oil. The MSDS doesn't list its ingredients since they're considered non-toxic. Interestingly, it hints it may contain linseed oil, since it warns the product can spontaneously combust.

Could it be the hydrogenation process would negatively impact its ability to harden when cured?

It would be possible to hydrogenate linseed oil, if you were to expose the oil to hydrogen gas while it is in contact with a cataylsis such as palladium on carbon or finely divided nickel then the carbon carbon double bonds in the fatty acid residues in the oil will adsorb hydrogen gas and become carbon carbon single bonds.

Here is a diagram of a unsaturated fatty acid like one of the ones in linseed oil.

The physical properties of the oil would change, normally if you hydrogenate vegtable oils their melting points increase and they become harder. This would tend to convert the oil from a liquid into a solid.

While it might be easier in some conditions to apply a paste of hydrogenated oil to an object like a wooden surface. The oil would not perform the same tasks as the oil normally does after the hydrogenation.

When exposed to oxygen gas an unsaturated oil like linseed oil will undergoe an oxidation reaction whcih forms organic peroxides. The funny thing is that the polymerisation reaction of alkenes is normally inhibited by oxygen. The breakdown of the organic peroxides will form free radicals which then make the oil turn into a polymer. A common use of linseed oil is to treat wood, you paint it onto the surface of bare wood. The oil enters the wood where it will be exposed to less oxygen than it is on the surface. It will then undergoe the polymerisation reaction and turn the wood into a composite material which has better properties than the wood.

What can happen is that the free radical can remove (abstract) a hydrogen atom from the side chain of the fatty acid. This forms a radical which is stablaized by resonance. 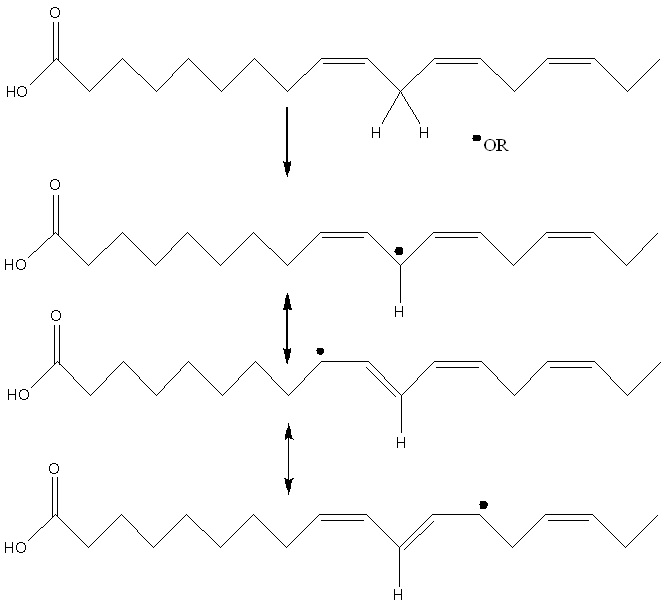 The radical can then react with oxygen to form a hydroperoxide which on heating can form alkoxy and hydroxyl radicals. This process can result in the number of radicals in the system increasing. 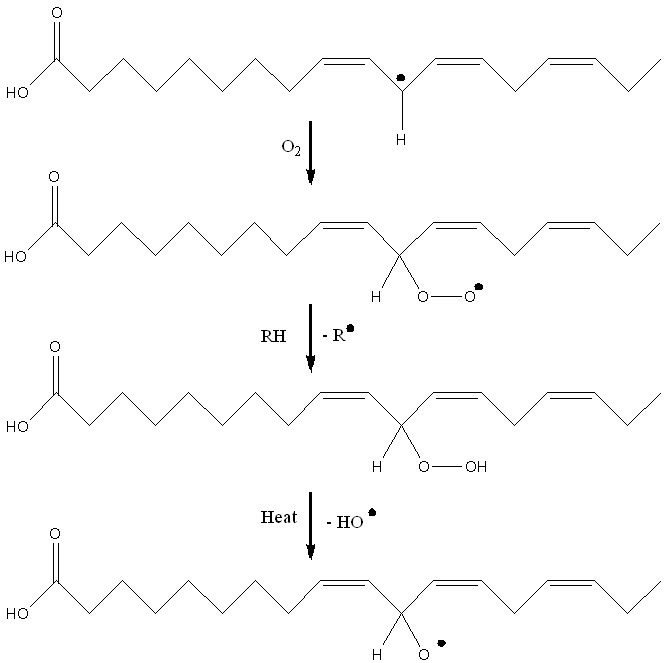 Instead of reacting with an oxygen molecule it is possible for the carbon centred radical to react with another alkene to form a new carbon carbon bond. This can result in the polymerisation of the oil.

It reminds me of a paper I saw years ago where someone impregnated wood with styrene before irradating the wood with either gamma rays or high speed electrons. This treatment formed a wood / polystyrene composite material which had good mechanical properties and also was resistant to wood boring creatures.

I think that the hydrogenated oil would be unable to enter the wood, also the polymerisation of the oil would be greatly reduced if it was hydrogenated. If we were to take a saturated oil such as a typical diesel fuel and soak wood in it then we will not improve the properties of the wood.

The diesel fuel would not undergoe a polymerisation reaction in the wood, a few years ago in Sweden an old diesel train used on a branch line had a fire. The train was partly made from wood. The wood had become contaminated with diesel over the years as a result of spills. The wood turned into a gaint version of a fire lighter. When the train caught fire the whole thing went up in smoke very quickly. So I think that hydrogenation of linseed oil would make it useless as a thing for treating wood surfaces.

One comment made after the original post was made was to point out that hydrogen peroxide can be used to oxidize the oil. This will form epoxides, the epoxide group is a three memebered ring with an oxygen in it. It is a special ether which is much more reactive towards nucleophiles such as amines. If the oil was treated with hydrogen peroxide then it would be possible to make a polyepoxide. If the polyepoxide was reacted with either ammonia or an amine. Then it would be possible to form a polymer. I am sure that there have been papers written on this subject.

49
Does oil break down condoms?
5
Can 1 gram hyaluronic acid really hold 6L of water?
2
Will the carboxylate groups of the citrate anion undergo hydrogen bonding?
9
Why does lavender oil dissolve plastic?
0
Polymers which are miscible in oil