Why are the products of Grignard reaction on an alpha-chiral ketone diastereomers rather than a racemate?

This is a Grignard reaction and the product has two chiral carbons. I think it should be a racemic mixture.

However, my teacher says the correct answer is diastereomers. He says if the reactant has no chiral carbon and product is chiral, then it would be a racemic mixture. But why?

First of all, welcome to ChemSE on your first post. Allow me to expand on the Comment of Karsten Theis and provide you with an illustration. If a compound is racemic and bears a single stereocenter, then it is properly represented without stereochemistry as shown in structure 1. The example you provide is a single enantiomer, (S)-4-methylhexan-3-one, 1-S. [If you are unfamiliar with R,S-nomenclature (CIP-rules), go here.]

Let's presume that our Grignard reagent is methyl magnesium bromide. Without addressing Felkin-Ahn issues, addition of the Grignard reagent to the carbonyl group of 1-S from the front (next to the methyl group) will afford stereoisomer 3 while addition from the rear of the carbonyl group produces stereoisomer 4. Both of these diastereomers are normally produced and invariably in unequal amounts. Why, you might ask. Felkin-Anh considerations notwithstanding, the reagent "sees" a methyl group from the frontside approach and a smaller hydrogen from the rear. There is difference in the energy of the two transition states. For the sake of argument, let's say that the ratio 2/3 is 3/1. Had you started with enantiomer 1-R, the ratio of the diastereomers 4/5 [red box] would also be 3/1; they are the enantiomers of 2/3, respectively. Enantiomers 2-5 are optically active.

Conducting the reaction on the racemate 1 will still give the same ratio 3/1 but the products will be racemic and not optically active. 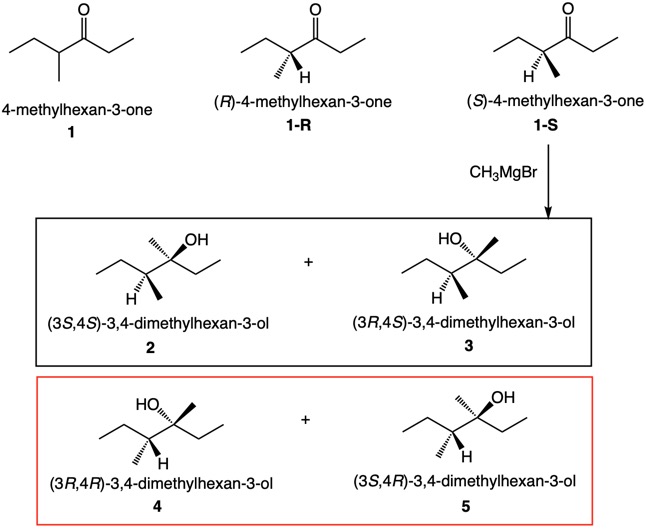 The reaction introduces a new chiral center into your mix, that chiral carbon being the one that has the tertiary alcohol on it (let’s call this #2).

The product will produce a mixture of those chiral centers being flipped between R and S, but you need to remember that there is a preexisting chiral center (let’s call it #1) that we have before creating this new one.

This reaction can have a mixture of #2 being R or S - but it has #1's chirality the same (s). This means not all chiral centers were flipped, creating diastereomer mixtures.

He says if the reactant has no chiral carbon and product formed is chiral then it would be a racemic mixture. But why?

So that occurs whenever we transition that sp2 carbon to sp3, turning the carbonyl into an alcohol (reduction), but that "rule" he gave says if there's no chiral carbon — we do actually have chiral carbons before the reaction starts — so the auto answer of "racemic mixture" doesn't quite apply here.

Not the answer you're looking for? Browse other questions tagged organic-chemistry stereochemistry grignard-reagent or ask your own question.

0
What are the products of the Grignard reaction with methyl-magnesium iodide?
4
Radical Bromination of a 1-isopropyl-4-methylcyclohexane
3
Which of the compounds give the same SN1 and SN2 products?
4
Are alkenes with bulky groups attached (like the one shown in the picture) chiral or achiral?
0
Predicting the product of a hydrogenation reaction
5
Chiral products from achiral reactants and 'principle of racemic mixture formation'
2
Alkene Electrophilic Addition Reaction Stereoselectivity When Two New Asymmetric Centers Form
0
Preparation of Grignard reagent. Free radical rearrangement
7
Grignard reaction with cycloheptatriene