the rates of these reactions will be

Where $k$ are the kinetics constants, and $c$ is the concentration of the various substances. Plotting $r = f (t)$, I get this 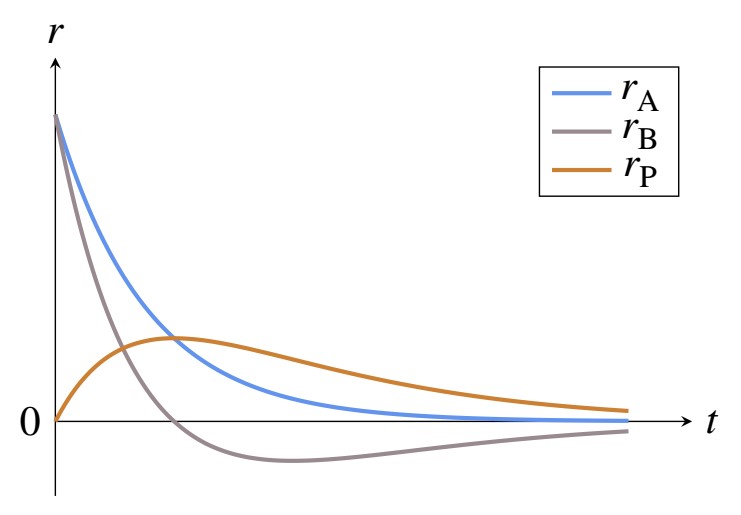 Your answer is correct. The concentration of species B reach a maximum when the rate of formation of the intermediate must equals the rate of dissapeance.

Since $r_B$ can be written as

This result is intuitive if you consider that below $t_{max}$ the concentration of B increases ($r_B > 0$) and drecreases above it $t_{max}$.

You can find a detailed discussion of this problem in the textbooks:

7
How to derive the rate laws for three consecutive reactions?

5
Analytical solution to first-order rate laws
2
Determination of the integrated rate equation for a reaction
7
How to derive the rate laws for three consecutive reactions?
4
Determining rate constants for parallel reactions from experimental data
18
Overall effective activation energy for parallel reactions
3
The reaction rate when the rate-determining step has a back reaction
1
Solution of a first- and second-order consecutive reaction scheme
4
Can anyone explain, why there are coefficients 2 in the equation for rate of change [A]?
5
Steady-state approach - how to find rate equation for intermediate?
4
Required induction time for steady-state approximation to hold