What does it mean when we say an atom has infinite energy levels/shells? [closed]

My chemistry teacher told that an atom has infinite energy shells according to Bohr model , where electron reside according to its angular momentum and energy.

But in lower classes/ grades I have learned that when we give excess energy to atom, the atom loses electron.

But now they are saying that when electron gain energy it move on to higher energy level.

So in this way, an electron should never 'jumps out'(sorry for that word) of atom? And keep going to higher energy levels as atom has infinite energy levels?

And should always be bound with the atom and never lost.

However electrons do actually leave atoms when given excess heat.

So how does atom lose electron and not always being bind with atom when given excess heat in spite of infinite energy levels?

What does my teacher actually mean by saying it?

Simply put, an electron in a hydrogen atom in a molecule of water in your fingertip could be detected in your elbow, or even on the moon. It does not have a location until detected, only a probability function describing where it can be found.

Raising the energy level changes the probability of where it can be detected, and, as your teacher stated, there are an infinite number of levels. Notice in the energy level diagram at HyperPhysics, or from physicsforums.com, below, that for higher n, levels are closer together. 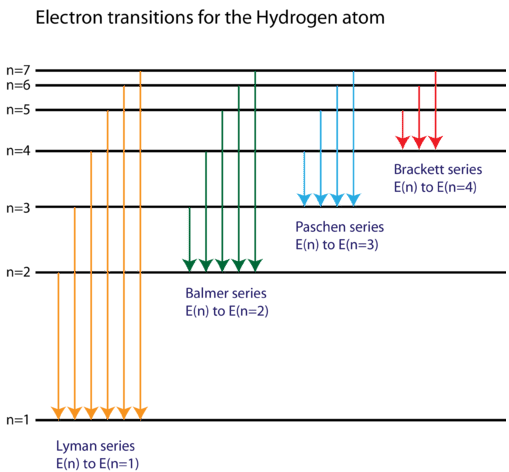 So, in a sense, even if the hydrogen is in an ionized state, the electron is never completely lost... though it might be indistinguishable from other electrons.

[Irrelevant thought for the day: can atoms be unionized, if they want better working conditions?]

Not the answer you're looking for? Browse other questions tagged physical-chemistry energy electrons atoms heat or ask your own question.

2
Do really the electrons could only orbit in specific orbits with a fixed radius?
0
Is there a difference between energy levels and electron shells?
1
Consequences of a neutron decay (beta radiation) and reasoning for an electron capture
2
Atomic Orbitals
1
What does "atoms make no compromises" mean?
2
What is the maximum number of emission lines when the excited electron of a H atom in n = 6 drops to ground state?
2
What are Degenerate Rotational Energy Levels Physically?