Does the charge on an atom impact the polarization of covalent bonds?

Generally, one can estimate the polarity of a covalent bond by looking at the differences in the electronegativities of the two atoms involved in the bond. However, I am wondering whether one can apply the ideas of polarizing power to atoms in covalent bonds, specifically the idea that net charge impacts the polarity of the bond. Does a higher positive net charge on one atom cause electrons in covalent bonds to be pulled towards that atom? This is what I would conclude from a polarization power argument, because an atom with a positive net charge has more polarization power. Similarly, would an atom with a negative charge pull less electrons? These ideas also seem to coincide with a Coulomb's Law argument that a more positive charge would attract electrons better, and a more negative charge would not attract them well.

One piece of evidence supporting this idea is the inductive effect; polarization propagates down a chain of sigma bonds because partially positive carbons are able to polarize carbon-carbon bonds. This polarization occurs in spite of the fact that the difference in electronegativity between the two carbon atoms is 0. This seems to imply that one has to consider both electronegativity and the charge on the atoms when determining the polarity of bonds. 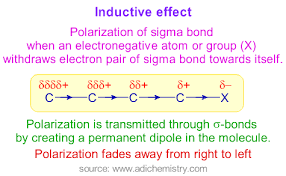 There are two particular cases that I am curious about: metals in coordination complexes and formal charges. Consider two complexes: one with a Mn (II) center and one with a Mn (VII) center. Will the Mn (VII) center withdraw the electrons of the M-L dative bonds better than an Mn (II) center (in turn inducing an electron withdrawal throughout the rest of the ligands)? For example, would an NH2 ligand be less basic when bonded with an Mn (VII) metal center than when bonded to an Mn (II) metal center, because the Mn (VII) center is able to withdraw electrons better (even though an Mn-N bond, with the same electronegativity difference between Mn and N, exists in both cases)?

I am also aware that there are other factors to consider when looking at the electron distributions of complexes and formal charge, such as pi donors/acceptor ligands and favored resonance states. However, I am wondering about the effects of charge on the polarization of bonds. Thank you for your help.

Everything is correct here, including the explicit examples- the ammonium group is a very strongly inductively electron withdrawing group in electrophilic aromatic subtitution, far negating any hyperconjugative mesomeric electron donation effects, and "permanganamide" is likely to be strongly acidic, with the Mn-O and Mn-N bonds being highly covalent.

1
How does a carbocation have a positive charge?
2
Determine polarity of covalent bond with formal charge
3
Why does magnesium form covalent bonds with carbon?
0
Ammonium in NH4Cl
0
How do lone electrons impact the charge of an ion?
1
Which Oxygen atom in HCOOH (formic/methanoic acid) does Carbon donate its electrons to, to obtain a partial positive charge?
4
Does formal charge affect bond polarity?
2
In acids why does polarising the O-H bond weaken rather than strengthen it?