What is m.2m point group?

Since the space group of anatse TiO2 is $I4_1/amd$, on this page, I found the point groups of the K points (in red rectangle). 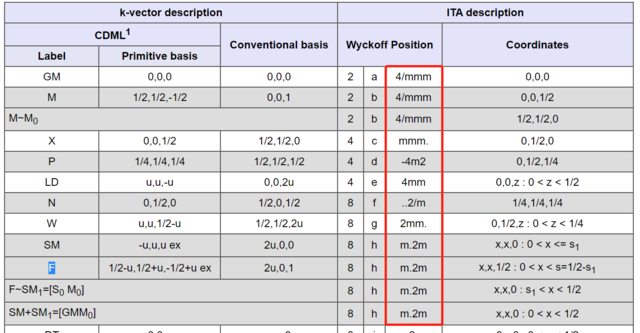 It can be seen from the table, there are point groups with dots in their names, for example $m.2m$ and $..2m$, which are not in the complete list of 3D crystallographic point groups.

These are not point groups, rather site symmetries or point symmetries, which do become Hermann–Mauguin point group symbols if the dots are omitted. The dots represent sets of non-contributing equivalent symmetry directions: it's a placeholder or a “dummy” for “unused” directions [1].

Column 1 The multiplicity, i.e., the number of equivalent points.

Column 2 The Wyckoff letter, starting with $a$ from the bottom up. Symmetry-inequivalent points with the same symmetry (i.e., lying on symmetry elements of the same type) are assigned different letters.

Not the answer you're looking for? Browse other questions tagged solid-state-chemistry symmetry crystallography group-theory or ask your own question.

17
Why do we need the identity operator, E
2
D3d point group matrices
2
Understanding Equivalent Wyckoff positions
3
Does a molecule need to be placed symmetrically in the unit cell?
5
Vibronic coupling: How do I determine the new point group after vibration?
1
Point group from mono to bulk MoS2
2
Crystallographic terminology associated with the honeycomb structure
1
Determine and draw planes and axes of symmetry of a molecule using software (VESTA or Mercury)
0
Sketching lattice points, primitive axes, primitive cell, and basis of atoms
3
How do we find the SALCs?