Reaction between 1,2-bis(buta-1,3-dien-1-yl)cyclohexan-1-ol and potassium hydride in THF

Which product is formed in the following reaction?

I am quite certain that we deal with an oxy-Cope rearrangement that works at room temperature, but I don’t know how to draw the product given the symmetry.

You are correct, it is indeed an oxy-Cope rearrangement and the macroexpansion gives the 14-membered ketone. From Paquette [1, p. 13979]:

In like fashion, the macroexpansion of 38 and related compounds proceeds in a stepwise manner via enolates 39a and 39b. Since 39a does not accumulate as the reaction proceeds, the second purely Cope rearrangement must be accelerated relative to the first. Trienone 40 has served as a precursor to (+)-muscone and (−)-(3Z)-cembrene A.

When treated with KH in THF at room temperature, both trans- and cis-10 gave a mixture of two E/Z isomers of the 15-membered tetraeneone 11 (61% and 40%, respectively). Catalytic hydrogenation of this mixture gave a 97% yield of muscone (12). 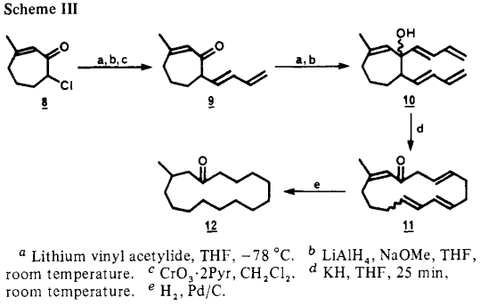 Structural assignment based on IR and NMR studies suggest the resulting product is the E,E,E-trienone [3]. The process of ring expansion via Cope rearrangement appears to be initially investigated by Cookson and Singh in late 1960s in the context of obtaining macrocyclic musk ketone [4]:

Reaction of the keto-allene (III) with vinylmagnesium bromide in tetrahydrofuran gave the vinyl alcohol (VII) in good yield.

The compound (VII) though fairly stable, showed the appearance of a carbonyl band, evidently by rearrangement to (VIII), when left for a prolonged period.

2
Reaction between zinc and sulfur
2
Which reaction occurs first when 5-hexen-1-ol reacts with sulfuric acid?
6
Formation of toluene from (cyclobutane-1,2,3-triyl)trimethanol using conc. sulphuric acid
12
Mechanism for the addition of hydrogen iodide to 3,3‐dimethylbut‐1‐yne
8
Does a reaction proceed through SN1 if rearrangement results in a stable carbocation?
9
Weerman degradation on alpha-hydroxy amides
4
Does the Oxy or Alkoxy Claisen Rearrangement Exist?