Shouldn't the Cl- be placed beside the charged N+ ion when writing the structural formula of Benzenediazonium chloride?

I found the structural formula of Benzenediazonium chloride written on a website:

I believe that the Cl- ion is stabilizing the N+ ion.

So, shouldn't the structural formula be written like the above instead?

With respect to the point of your question, both ion placements are acceptable for the specified form of the salt's structural formula. From section GR-7.2 Positioning of components [1, p. 383] (emphasis mine):

The various components of a salt may be positioned relative to each other in one of two ways. If one of the components consists of a single atom, it may be “paired up” with an oppositely charged atom in a larger component, with the positioning of the larger fragment determined by other considerations as discussed in GR-3. The fragments should be positioned as if there were a single bond between the cationic and anionic centers, even if this requires that the cation be drawn on the right side of the anion. The positioning of the smaller fragment will then usually be determined according to other recommendations (that straight chains should not have arbitrary bends in them, for example). 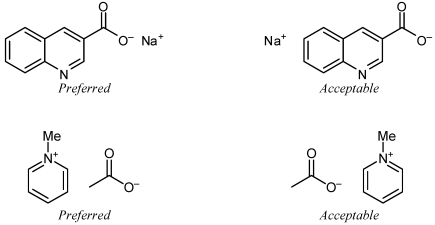 You are right. But it is not always possible to print this formula with $\ce{Cl-}$ ion UNDER the diazo line. It depends on the programs available on your computer, specially if you replace the benzene ring by the formula $\ce{C6H5}$, and if you want to type it on one line in a text.