What are oxidation numbers of each element in CuH?

My chemistry teacher said hydrogen when bonded with metals has oxidation number (O.N.) of −1 except CuH: in CuH the hydrogen has O.N. +1 and the copper has O.N. −1.

But on the internet it is ubiquitously told that the O.N. of hydrogen is −1 in CuH too, and the compound's name is copper(I) hydride. I am confused which one is correct. If hydrogen has O.N. of +1 in CuH, why is it so?

For $\ce{CuH}$ the calculated density of electron states shows the hydrogen-based 1s states filled, and lower in energy than the copper-based 3d states. This is similar to the oxygen- and hydroxyl-based states in the oxide and hydroxide. The copper hydride result thereby identifies that compound as a metal hydride with positive metal oxidation state. 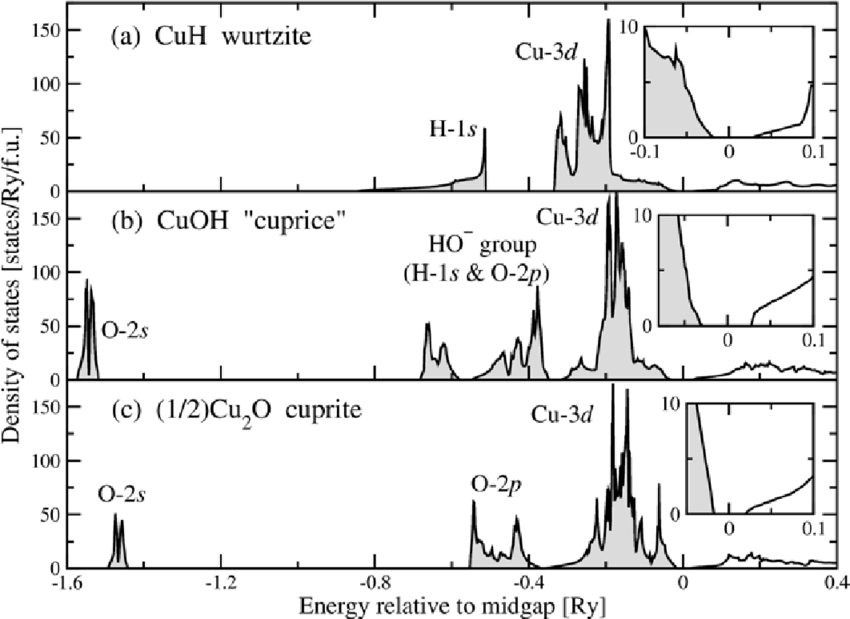 Not the answer you're looking for? Browse other questions tagged inorganic-chemistry transition-metals oxidation-state hydrogen or ask your own question.

16
What is the oxidation state of Mn in HMn(CO)5?
13
What is the difference between "atomic hydrogen" and "nascent hydrogen"?

3
How to determine an oxidation number of an atom in the compound, that has at least two elements, which are not hydrogen or oxygen?
2
What is the nature of the oxide of boron?
1
Why is it lead(II) chromate and not lead(II) chromate(VI) tetraoxide?
28
What are oxidation states used for?
1
Difficulty understanding redox in terms of hydrogen and oxygen transfer?
0
What is the proof for saying all the compounds-of-an-element (except few), to have the same oxidation number?
0
What determines the atom or molecule that receives electrons during oxidation?