How does Ostwald-Walker method work?

From searching online I found this:

The apparatus consists of two sets of bulbs. The first set of three bulbs is filled with solution to half of their capacity and second set of another three bulbs is filled with the pure solvent. Each set is separately weighed accurately. Both sets are connected to each other and then with the accurately weighed set of guard tubes filled with anhydrous calcium chloride or some other dehydrating agents like $\displaystyle P_2O_5$, conc. $\displaystyle H_2SO_4$ etc. The bulbs of solution and pure solvent are kept in a thermostat maintained at a constant temperature.

Loss in mass in the solution bulbs $\displaystyle \propto p_s $

Total loss in mass of both sets of bulbs is equal to gain in mass of guard tubes.

Further we know from Raoult’s law

The above relationship is used for calculation of molecular masses of non-volatile solutes.

For very dilute solutions, the following relationship can be applied.

How are the vapors transported?

The additional question from the comments:

Why [is] the amt. of vapours taken up proportional to vapour press. Why directly proportional? Why not nothing else?

Vapor pressure [...] is defined as the pressure exerted by a vapor in thermodynamic equilibrium with its condensed phases (solid or liquid) at a given temperature in a closed system.

So basically, before you start the experiment (see below) the vapors have already formed, meaning that thermodynamic equilibrium has been achieved. Then you start bubbling through dry gas, which then mixes with the vapor gas already in the bubbles. If you set the gas flow appropriately, you get a near-equilibrium situation (see the graphic below) and the gas that exits the bulb assemply has exactly the same amount of vapor in it as the vapor "layer" (which can not be thought of as a layer anymore because of the bubbling) above the liquid surface.

The answer is not simple, but the explanation of the vapor pressure lowering effect can be given by assuming a simple model: Imagine that in the solution, there are two types of molecules; the solvent and the solute. In the pure solvent, there is only one kind. Statistically speaking, that means that there is also a smaller amount of solvent molecules at the boundary between the bulk phase and the vapor. Since solute molecules don't go over into the vapor, there is a smaller area of solvent molecules that can go over into the vapor, which means that the vapor pressure of the solution is smaller when compared to the pure solvent.

What about the proportionality constant?

How can we add $\propto p_s$ and $\propto p_0−p_s$ when we don't know what the proportionality constants are or even if they are equal?

While we don't know the magnitude of the proportionality constants, we know that they are equal. The proportionality constant is most likely dependent on ambient pressure, temperature and flow rate of the gas. These three variables are being controlled during the experiment and kept constant for all glass bulbs. (Well, I don't know about keeping ambient pressure constant. But if you perform the experiment fast enough, that shouldn't pose much of a problem.)

It would be better if you could explain in detail the process because I'm not getting it properly from here.

Why do we do this?

First, we have to remember: Why are we doing this process; what do we want to find out? The answer is: We want to quantify the relative lowering of the vapor pressure.

How do we do this?

Here's what happens during the process:

This might still be hard to understand, so here a graphic that shows you what happens to the solvent vapor partial pressure in the gas: 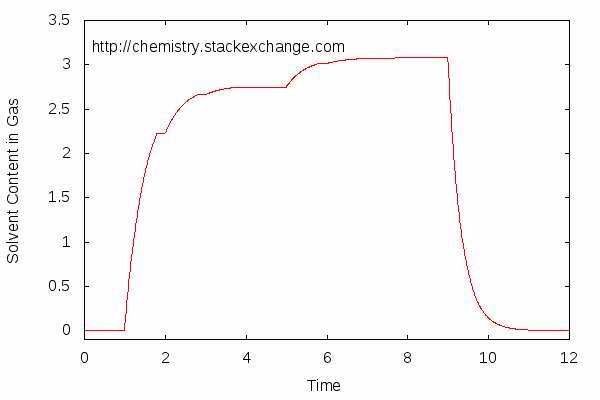 In conclusion, I can only say that I hope to have clarified things for you. I myself spent quite some time researching this method, as I have never heard of this question before. Thank you for the opportunity!

Not the answer you're looking for? Browse other questions tagged experimental-chemistry vapor-pressure or ask your own question.

1
How does dry air get saturated in the Ostwald-Walker Method?

5
Does Cute Poison actually work?
6
How does aluminium amalgam work as a reducing agent?
8
How does the Mentos-Coke explosion work?
4
The Boiling or Evaporation of Diethyl Ether
1
How does non-electrolytic tinning work?
0
Why does steam distillation work?
0
What is the mass fraction of trichloroethene in the liquid phase using vapour pressure and mole fraction in gas phase?