Pyrene doesn't seem to be aromatic. However, sources claim that it is aromatic. 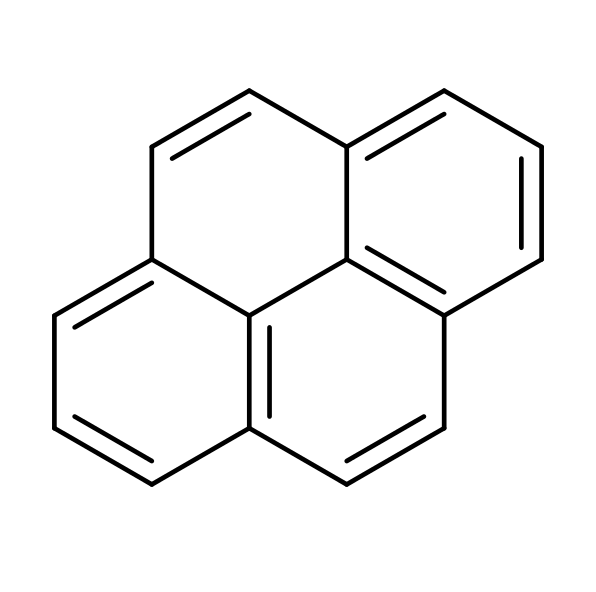 Something leads me to suspect that Hückel's rule is an oversimplification here. Or is pyrene indeed non-aromatic?

To clarify @ron's point, the general "cheminformatics" rule for deducing aromatic fused-ring systems is whether there is one path (usually the peripheral one) that satisfies $4n+2$:

The bold bonds give you a ring path of $\mathrm{sp^2}$ carbons with 10 π electrons, so it's aromatic. There are some arguments about whether the central bond is aromatic or not. (I say baloney, but it's fair to say aromaticity generates lots of arguments.) 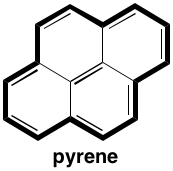 I wrote the code for Open Babel and aside from some tricky nitrogen-heteroaromatic rings, this rule generally matches chemical reality. (Setting aside the question of the interior carbons.)

I think another fairly safe rule is "if a fused aromatic system is made up of individually aromatic rings, aromaticity is retained."

Pyrene is aromatic. The Hückel $4n+2$ rule works best with monocyclic ring systems. If you look at the following resonance structure for pyrene with a central double bond, the monocyclic periphery has 14 π electrons (ignoring the greyed-out central double bond), but that is a rationalization.

While the previous answers are correct in indicating that pyrene has aromaticity, they are often correct for the wrong reason. The proper way to break down the aromaticity in pyrene is to make the most Clar sextets possible. Clar sextexts are sets of six electrons that are cyclically delocalized. There are two unique ways to draw the Clar sextets in pyrene.

The first drawing shows two Clar sextets, while the second only has one, and thus should be less favored. If we perform NICS computations to determine where the delocalization happens, we see more delocalization in rings A and D than in rings B and C.

This can be further expanded to other systems such as pentacene, which shows a much lower singlet triplet gap than many other organic molecules thanks to the triplet having two stabilizing Clar sextets.

For a more complete description of Clar sextets and aromaticity, I would recommend an article by Portella et al.1 Also, as others have mentioned, when moving to 3D, things can get weird.

Hückel's rule is not valid for many compounds containing more than three fused aromatic nuclei in a cyclic fashion. For example, pyrene contains 16 conjugated electrons (8 bonds), and coronene contains 24 conjugated electrons (12 bonds). Both of these polycyclic molecules are aromatic, even though they fail the 4n+2 rule. Indeed, Hückel's rule can only be theoretically justified for monocyclic systems.

Not the answer you're looking for? Browse other questions tagged organic-chemistry hydrocarbons aromaticity or ask your own question.

1
Name of a beehive like organic structure, is it aromatic?
0
What is non-hückel double bond of Aromaticity?
1
Why Isn't Huckles rule applicable to more than 3 fused rings
18
Do lone pairs on substituents (e.g. in aniline) count towards Hückel's rule?
8
Can a cyclic amine form an amide?
6
Is biphenyl considered to be aromatic?
11
Is cyanidin aromatic?
0
Cross-conjugation and aromaticity in pyrene
0
Clar's rule of polycyclic aromatic hydrocarbons