We are doing an electrolysis experiment using distilled water with sea salt on clean stainless steel plates. A horrible black gunk has formed in the water, very quickly. What is this? 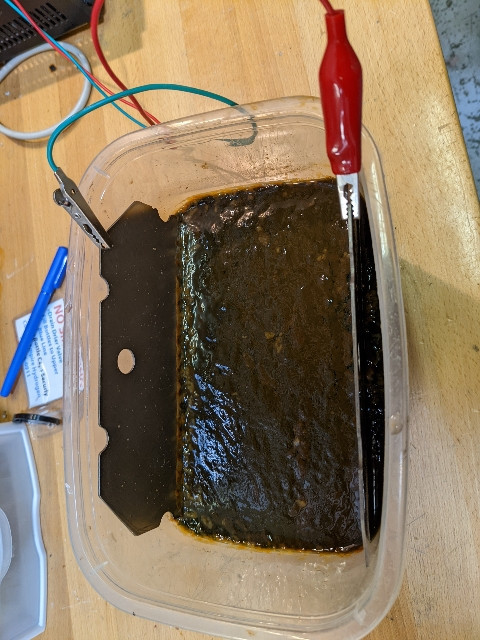 I don't believe this is simply the brown colour that others are seeing on their plates. The black liquid appears after just 90-120 minutes in the bath. We are using 4V at 2A in this. And we definitely do not see this when we use KOH as the chemical.

electrochemistry electrolysis
Share
Improve this question
edited May 27 at 18:15

The applied current drives sodium ion to the cathode (negative pole) where hydrogen is evolved and the surrounding medium becomes more alkaline.

The more interesting - in the sense of catastrophic - area is at the anode, where the very high applied positive voltage oxidizes water to oxygen and chloride to chlorine, while simultaneously demolishing the passive film on the stainless steel. At this point, the elemental chlorine which was just produced can attack the steel, instantly reverting to chloride ion, which is oxidized to elemental chlorine, but I repeat myself.

Another thing that happens at the anode is reduction of pH, because if you take oxygen away from water, all you have is hydrogen. Now steel should react with water, and it will, faster with a catalyst like chloride ion, probably much faster with an applied current of 2 amps, and even faster with elemental chlorine present, and even faster with the equivalent of hydrochloric acid in the solution.

And then, the temperature: 8 watts (4V x 2A) in a tiny little dish (what - about 50 mL? - couldn't be more than 100 mL). In 90 minutes, you are putting in over 10 kilocalories of heat (granted, some energy goes out as the hydrogen and oxygen). So the temperature got to what? About 90º-100ºC? This would guarantee a rapid reaction, lots of chlorine odor, and alkaline and acid mists spraying out into the lab. (Each electrode will produce its own mist, and much will probably escape without being completely neutralized.)

The black gunk is a mix of iron, chromium (and possibly nickel) chlorides, oxides and hydroxides. with some of the sodium from the sea salt. It's essentially mushy mixed rust. It's an efficient method of destroying stainless steel.

The more I ponder this experiment, I wonder if there were any injuries. Please don't scale up!

Just count the number of electrons that you provided to the electrodes during 2 hours: 120 x 60 x 2 A=14,400 Coulomb. 1 Coulomb = 6,240,000,000,000,000,000 electrons! Do this multiplication with 14,400 Coulomb. Also rest assured that each electron caused a chemical reaction, because it has to if you forced this high current. What is there to react during electrolysis? Water, salt, and steel plates. When all of them are decomposing, the products react together in a mixed compartment- you get this reddish gelatinous precipitate of mainly iron (III) hydroxides because the cathode side is alkaline.

This precipitate cannot appear all of a sudden after 120 minutes, the electrode corrode slowly with the passage of time and the electrode (anode) continuously dissolves as current is passed through it.

It is probably a mix of Fe++, Ni++ and Cr+3 oxides and hydroxides. This is a common trick by RO system salespeople to convince people how terrible their water is. They electrolyze a nail, the more ions the more gunk that forms [the water usually is terrible]. My explanation for no precipitate with stainless steel with KOH electrolyte is that the amphoteric Chromium is most easily oxidized to the soluble chromite ion in the basic solution. A more careful chemical analysis is in order. It is important to have a purpose for a chemical experiment to answer specific questions. This appears to be playing with chemicals with no defined purpose or reasons. So back to the planning stage, what is the purpose of the experiment, what variables must be controlled etc. [Water purity, solute, anode composition voltage to name a few].

Warning! In the process of this experiment, you most possibly have created some amount of toxic, carcinogenic, and environmentally harmful waste. Read further for answer to your question and more details.

All the nasty buildup is probably composed of carbon that was originally in the steel, mixed with some amounts of insoluble oxides and/or hydroxides of steel's constituting metals.

Stainless steel is a particularly bad choice for an electrolytic anode, because it contains chromium (at least 11%, often much more) and nickel. Both nickel metal and soluble nickel salts are toxic and carcinogenic. Chromium gets mobilized into the solution by being oxidized to trivalent $\text{Cr}^{3+}$ ions which, under favourable conditions, could get oxidized further to especially toxic and carcinogenic hexavalent forms $\text{CrO}_4^{2-}$ and $\text{Cr}_{2}\text{O}_{7}^{2-}$ (chromate and dichromate anions). It is absolutely unacceptable and illegal to dispose of such waste by pouring it down the drain. If EPA knew about any such incident, they would be on that person like flies on fresh manure.

Alkaline water electrolysis is one of the easiest methods used to produce hydrogen, offering the advantages of simplicity and low cost. [...] Stainless steel (SS) is considered one of the least expensive electrode materials for alkaline electrolysers, since it is relatively chemically stable and has a low overpotential. Nevertheless, SS anodes do not withstand high concentration alkaline solutions because they undergo a corrosion process. If the electrolyser operates at a voltage of up to 1.6 V, it can generate Fe3O4 and hazardous hexavalent chromium (Cr6+) at the anode. Hexavalent chromium is generated when the chromium-containing stainless steel electrodes undergo an electro-oxidation process.

Pour your waste into robust plastic containers, like those white, one gallon "jugs" in which household bleach is sold, and clearly label them as hazardous. From then on, you can pay a chemical waste company to have this waste disposed of for you, or you can store them in some safe and isolated place where absolutely no children or animals have access to, until you can have them properly disposed of.

PS If someone spells "chromium" as "chrome", or claims that any amounts of sodium could be obtained in aqueous electrolysis, I would highly suggest against taking any advice from such a person.

5
Why are electrolysis cell plates turning a brown color?

2
Chromium from electrode not oxidizing in electrolysis
14
Does increasing concentration of copper sulfate decrease or increase its conductivity?
5
Why are electrolysis cell plates turning a brown color?
1
Black Sludge Appearing When Making Iron Oxide Through Electrolysis
0
Sodium Sulfate or Sodium Carbonate for electrolysis in water