Stereochemistry of nitrosyl chloride addition to an alkene

My book states addition of $\ce{NOCl}$ to propylene results in 2‐chloro‐1‐nitrosopropane:

According to Mallya and Nagendrappa [1], the reaction would follow syn addition:

Cycloalkenyltrimethylsilanes add nitrosyl chloride stereo- and regio- selectively. The addition is syn, with chlorine and nitrosyl group adding to C-1 and C-2 respectively.

I am unsure whether it's applicable to my problem. Moreover, I was under the impression that the addition would be anti due to steric repulsions.

organic-chemistry stereochemistry c-x-addition
Share
Improve this question
edited May 27 at 9:43

Syn or anti addition is difficult to resolve with propene because the final product admits rotation about the single bond. However, if the rotation is constrained or the relative positions of the functional groups are marked by chirality, then we see anti addition. See this summary of reaction mechanisms, step 41. 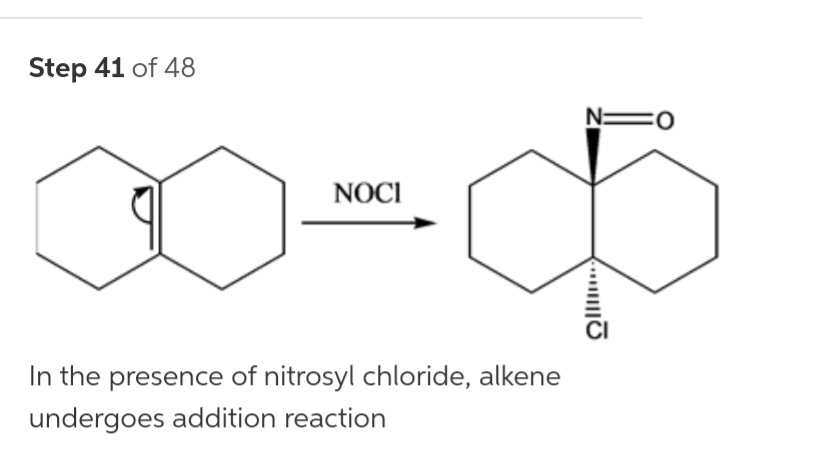 More is involved than steric favoritism here. When the nitrosyl cation adds to the alkene, it picks up an electron pair on the nitrogen which can then back-bond to the carbocation center (cf. the bromonium ion formed with electrophilic bromination). The electron-accepting orbital is then antibonding with respect to this linkage and thus displaced to the back side of the carbon. So the chloride ion will attack the carbon there to give the anti product.

The most important fact about this question is the stereochemistry of nitrosyl chloride $(\ce{NOCl})$ addition to an alkene. The OP has wondered whether it follows syn- or anti-addition.

The answer is not simple one word answer. According to the Ref.1, the nitrosochlorination of alkenes is shown to possess features common to other reactions of electrophilic addition, yet the stereochemistry of the addition depends on the structure of the alkene. For example, the addition of $\ce{NOCl}$ to norbornene follows cis-stereochemical course while that to $\Delta^9$-octalin follows trans-stereochemical course. However, the Ref.2 suggests that stereochemical outcome of the reaction also depends upon solvents used in the reaction. For instance, the stereochemistry of the addition of nitrosyl chloride to cyclohexene in liquid sulfur dioxide is not the same when the identical reaction is performed in $\ce{CH2Cl2}$ or in $\ce{CHCl3}$ (Ref.2).

In later studies of same reaction in liquid sulfur dioxide, the trans-stereochemical out come of the dimeric product has established by NMR spectral data (Ref.3).

Structural influence on this reaction was also established on the $\ce{NOCl}$ addition on 3,4,6-tri-O-acetyl-D-glucal, which has predominantly showed cis-addition (Ref.4 & 5):

Not the answer you're looking for? Browse other questions tagged organic-chemistry stereochemistry c-x-addition or ask your own question.

5
Markovnikov's addition to halogenated alkene?
2
(stereochemistry)epoxide from alkene
1
Why is there syn-addition in this bromination of an alkene?
2
Alkene Electrophilic Addition Reaction Stereoselectivity When Two New Asymmetric Centers Form
1
Stereochemistry of product in Grignard-Gilman addition reaction
8
Isocyanides undergo addition reactions, but cyanides do not. Why?