I was looking again at the periodic trends like Ionization Energy, Electron Affinity, Radius and so on. I understood all the general trends and the exeptions for these ones, but I can't fully understand the trends for Atomization Enthalpy/Energy.

Quoting my book ( Inorganic Chemistry - Atkins ) : "[...] enthalpies of atomization first increase and then decrease across Periods 2 and 3, reaching a maximum at C in Period 2 and Si in Period 3. The values decrease between C and N, and Si and P: even though N and P each have five valence electrons, two of these electrons form a lone pair and only three are involved in bonding. A similar effect is seen between N and O, where O has six valence electrons of which four form lone pairs and only two are involved in bonding."

Now, I understand why the enthalphy decreases from C ( a covalent solid in its standard state ) to N ( a biatomic gas in its standard state ), because of course it's easier to "atomize" the gaseous molecule. But I don't understand why this happens from Si ( covalent solid ) to P ( molecular solid, P4, in its standard state ): I'd think that for "atomizing" P4 we would need much more energy because firstly we need to break the intermolecular forces and then the covalent bonds of the tetratomic molecules (P4). Even if I considered P4 as a single molecular species, not a solid, I would expect that ( as the book implies ) P4 would be harder to "atomize" than Si, because every P has 3 unpaired electrons and it forms 3 bonds with other P atoms, while Si has only 2 unpaired electrons.

The trends in the d-block are clear to me. But this one bothers me.

Please excuse my english and thank you in advance.

I don't think I can give a canonical answer, but here are some quick thoughts:

I previously mentioned the BDE for P-P and Si-Si, but the standard CRC tables mention offhand that the values are for diatomic molecules, even though they use the P-P single bond notation.

The P-P dissociation energy is for an average P-P bond, not counting the high ring strain inherent in the $\ce{P4}$ tetrahedra, in which the P-P-P bond angle is 60°, not ~100° as you might expect in some sort of hypothetical P-P-P chain compound. 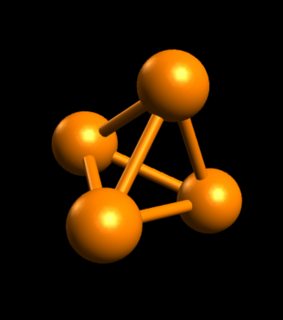 Consequently, it's this angle strain that makes $\ce{P4}$ fairly reactive.

So you have more bonds for silicon and they're a bit stronger, and the $\ce{P4}$ tetrahedra are strained.

On the other hand, to quote "The Thermodynamic Properties of Phosphorus and Solid Binary Phosphides." by Schlesinger:

Phosphorus is available in a bewildering variety of physical states, and the thermodynamic stabilities of most are understood poorly at best.

Because of the difficulty in obtaining and performing experimental work with red and black phosphorus, the most reliable thermodynamic data has historically been obtained working with white phosphorus and the metastable liquid. That in turn has led to the choice of R-white/liquid phosphorus as the reference state for the element, despite experimental evidence showing that red (I), red (IV), red (V), and both black forms are all more thermodynamically stable.

In short, if you're confused by phosphorus enthalpies, you're not alone. It's been tricky to measure and understand as well.

When I perform a search for P-P bond dissociation energies, I find a huge range of values.

Not the answer you're looking for? Browse other questions tagged inorganic-chemistry thermodynamics enthalpy or ask your own question.

11
If d-electrons are such poor shielders, why do trends increase more gradually across the d-block than the s or p-block?
10
What type of bonding is there among d-block metals?
1
Atomization enthalpies of transition elements
1
Only valence shell electrons participate in bonding then how is Cr in H2CrO4 forming 6 covalent bonds although it has only 1 valence electron?
1
When to consider back bonding and when to not; when will it change hybridisation and when will it not?
0
How can you have standard enthalpy of formation of water at 298 K?