Details of what actually happens in cold sulfuric acid between 80 and 90%; what molecular changes cause the viscosity to skyrocket?

Das et al. (1997) Electrical Conductance and Viscosity of Concentrated H2SO4/H2O Binary Systems at Low Temperatures: Correlation with Phase Transitions (J. Phys. Chem. B 1997, 101, 4166-4170) do a thorough analysis and mention phase transitions and hydrate formation, but 25 years later are there more detailed molecular models of what is happening that might address the exact form of the hydrate(s) formed or any long-range correlations or ordering behind the peak in viscosity at a certain high concentration?

Question: What details are known or theorized as to what actually happens in cold sulfuric acid between 80 and 90%, what molecular changes cause the viscosity to skyrocket? 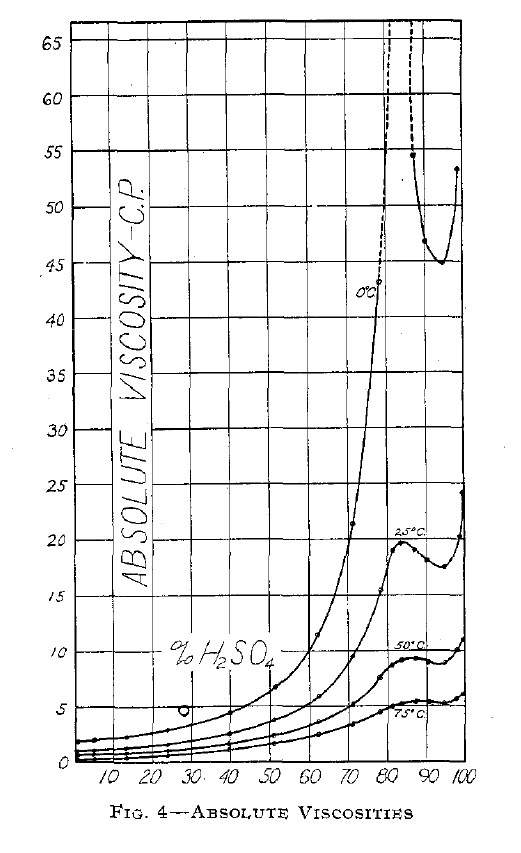 The composition where we see this rapid rise in viscosity corresponds to one of several sulfuric acid hydrates, specifically the monohydrate formally rendered as $\ce{H2SO4•H2O}$. As shown in this colorful diagram from Maynard-Casely et al.1, this monohydrate corresponds to a maximum in the melting curve, indicating that in the cold acid this composition is organizing itself into a solid structure. 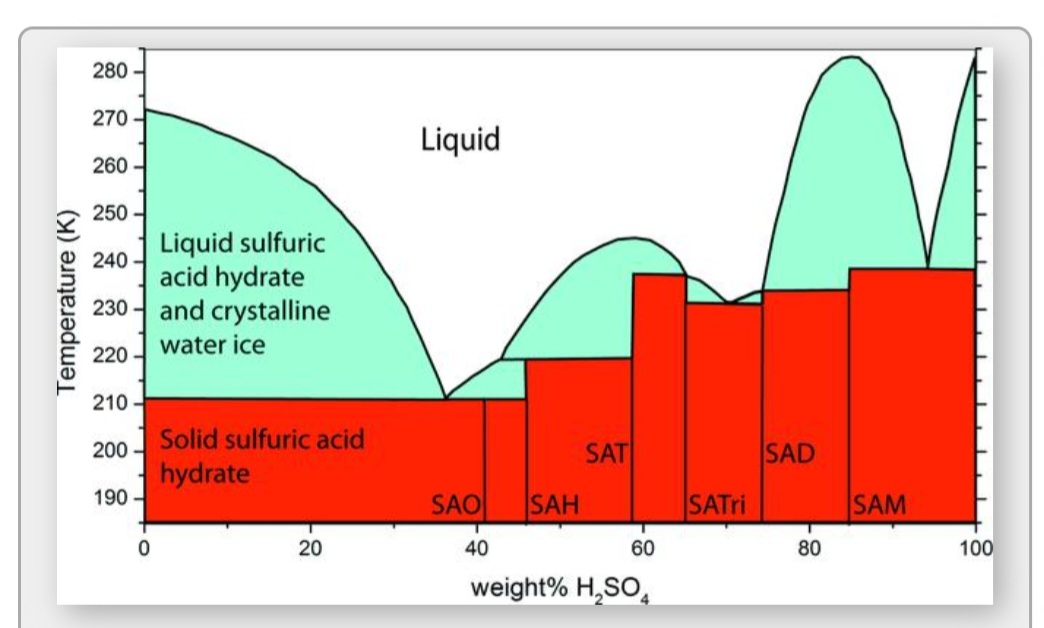 Sulfuric acid is, of course a strong acid towards water with respect to its first deprotonation, forming $\ce{H3O^+}$ and $\ce{HSO4^-}$ ions (the second deprotonation, forming $\ce{SO4^{2-}}$ ions, predominates only in very dilute water solutions). As we see with some other strong acids such as perchloric acid, these ions can form a salt, whose composition matches the monohydrate ($\ce{H2SO4•H2O}=\ce{(H3O^+)(HSO4^-)}$). Taesler and Olovsson2 find this ionic structure from single-crystal XRD, with the additional feature that the bisulfate anions are polymerized by hydrogen bonding. Hydrates formed with more water are also known, including the octahydrare studied in the reference. But (with the additional water in their formulations) these involve either a more bulky, irregularly shaped cation than the monohydrate or have water molecules in their structures, both of which would favor a less stable and lower-melting solid than the monohydrate salt would be.

Not the answer you're looking for? Browse other questions tagged aqueous-solution molecular-structure viscosity or ask your own question.

23
Is "Sulfuric acid... makes a poor electrolyte... very little of it will dissociate into ions" really true? What does that actually mean?
18
Why does the graph of the electrical conductivity of sulfuric acid/water solutions have this knee in the ~85%-~92% range?

7
What is the molecular structure of polymetatelluric acid?
0
What is the difference between low-density and high-density Polymethyl methacrylate (PMMA) on a molecular level?
8
What is the molecular structure of the fragment ion m/z 161 of rosmarinic acid?
1
Products of the reaction between chromium(III) chloride, zinc and sulfuric acid
23
Is "Sulfuric acid... makes a poor electrolyte... very little of it will dissociate into ions" really true? What does that actually mean?
18
Why does the graph of the electrical conductivity of sulfuric acid/water solutions have this knee in the ~85%-~92% range?
1
Reaction between concentrated sulfuric acid and sodium bromide