Why does the difference of energy between the 2s and 2p orbitals of the second period elements increase with increasing atomic number? Does this difference increases by moving down a group, e.g. is the difference between 3s and 3p bigger than 2p and 2p and why?

In naive terms I think this could be explained as follows:

That is all what they can tell you in school. But, of course, the situation is more complicated, and i don't think it can be addressed without doing electronic structure calculations. Yes, effective nuclear charge experienced by an electron is often expressed as $Z_{\mathrm{eff}}= Z - s$, where $Z$ is the real nuclear charge and $s$ is the so-called screening constant; $s$ is different for electrons at orbitals corresponding to different values of the principal quantum number $n$ and there are some empirical Slater's rules which provide numerical values of $s$ for different values of $n$. But these picture is "not quite right".

First, as I already pointed out and as one indeed can see from the Wikipedia page linked above, $s_{2s} = s_{2p}$ (same value of $n=2$). But surely if one calculate these screening constant by solving the corresponding Schrödinger equation he/she will indeed found that $s_{2s} \neq s_{2p}$. But even without solving the Schrödinger equation the naive argument given above in (1) favour this inequality. So, $s$ is not just a function of $n$, but also of $l$.

Secondly, screening constants in Slater's rules does not change their values as atomic number increases which is also wrong. Loosely speaking, the more nuclear charge electron can screen, the more will it screen. Below is the related graph from the article with screening constant calculated at the Hartree-Fock level linked above. 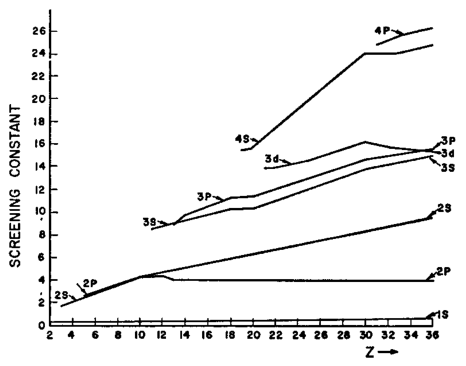 So, $s$ is also a function of $Z$, and besides for different $n$ and $l$ it depends on $Z$ in different ways. The "real" picture (in quotes since orbitals aren't real anyway) as we can see is much more complicated, and, honestly speaking, I do not even believe that there is a trend you are looking an explanation for.

Let's start with neon, the attractive force of 10 protons, screened to varying degrees by the 9 other electrons, must be overcome in order to remove the outermost p electron, this requires 21.5 eV. There are only 9 protons holding the outermost electron in fluorine in place, again screening plays a role, but with only 9 protons it is easier to remove fluorine's outermost electron (18.7 eV). This trend of decreasing IP continues for the remaining elements with 2p electrons as we move to the left across this row of elements.

The corresponding 2s IP's are much higher. For example, the neon 2s IP=48.5 eV. To measure this IP, we have already removed neon's 6 outermost 2p electrons. The 2s electron is still held in place by 10 protons, but now only 3 other electrons remain to screen these protons. Consequently it is much more difficult to remove one of neon's inner 2s electrons. As we move to the left across this row of elements looking at the 2s IP's we see a trend similar to what we saw with the 2p IP's, but 2 factors are now involved. It get's easier to remove the 2s electron as the number of protons decreases (reduced nuclear attraction) and as the number of already removed outer 2p electrons becomes smaller (more screening).

The same trends are observed in the n=3 series, but the IP's are lower to start with and differences between successive ionizations are compressed because the number of protons, and therefore the number of screening electrons, has increased by 8.

Here is a good example of compression. The first IP of neon is 21.5 ev, the IP to pull out a fifth electron (after the first 4 electrons have already been removed) is 126.2 eV - about 6 times more energy is required. Now consider radon, its first IP is only 10.7 eV. That electron in radon has so many more electrons between it and the nucleus (76 more to be exact) that screen that last electron from the nucleus, that it is much easier to remove that outermost electron in radon. The fifth IP for radon is 55 eV - only about 5 times more energy (less than 6) is required here, that is compression.

Here is a link to a nice, thorough discussion on ionization energies and their trends that you may find of interest.

Finally here is a pictorial representation of what we have been discussing. 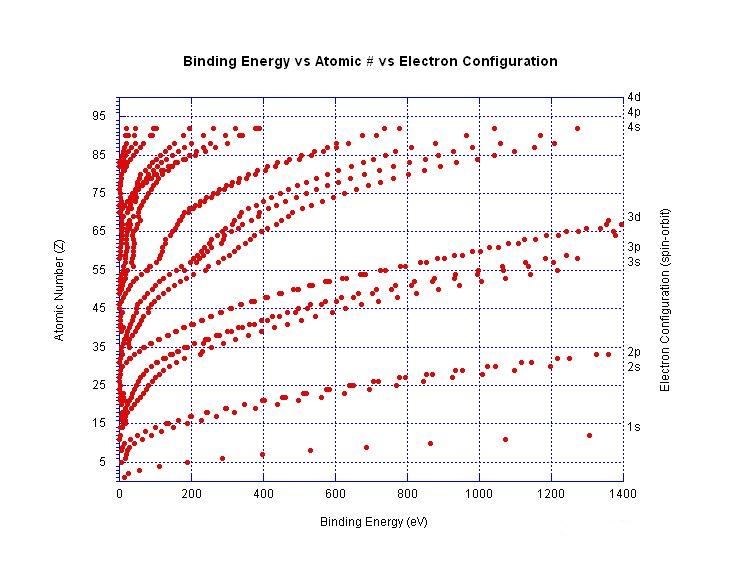 Note how the spacing between the lines decreases as we move to higher atomic number; also note that the slope of the lines tends to increase as the atomic numbers increases. Both of these observations illustrate what we have been discussing. As the atomic number increases there are more and more electrons between the outermost electron and the nucleus making it easier to remove that last electron and making the both the absolute and relative differences between successive ionizations (e.g. 1st IP and 2nd IP, 1st IP and 5th IP, etc.) smaller.

Not the answer you're looking for? Browse other questions tagged orbitals periodic-trends or ask your own question.

1
Why does s-p orbital separation increase with increasing atomic number?
5
Effect of effective nuclear charge increase on the stabilization of 2s and 2p orbitals