Is There a Problem with the Assignment of Stereochemical Descriptors by ChemDraw in Select Examples?

While using ChemDraw Professional 21.0.0.28 to construct some cyclic allenes and rotationally restricted biphenyls, I came across anomalous assignments of stereochemistry. [For the latest version of the 2013 IUPAC BlueBook go here and for errata look here.]

Rotate the structures 180° about the horizontal axis. Allene 1 superimposes on 2; biphenyl 3 superimposes on 4. These two structures are no different from the case of cycloheptanols 5/6 rotated about the horizontal axis or ᴅ-arabitols 7/8 about a vertical axis. Structures 5 through 8 are handled properly; structures 1 through 4 are not. Is it just me or is there something wrong with the CD algorithm that doesn't address this issue? 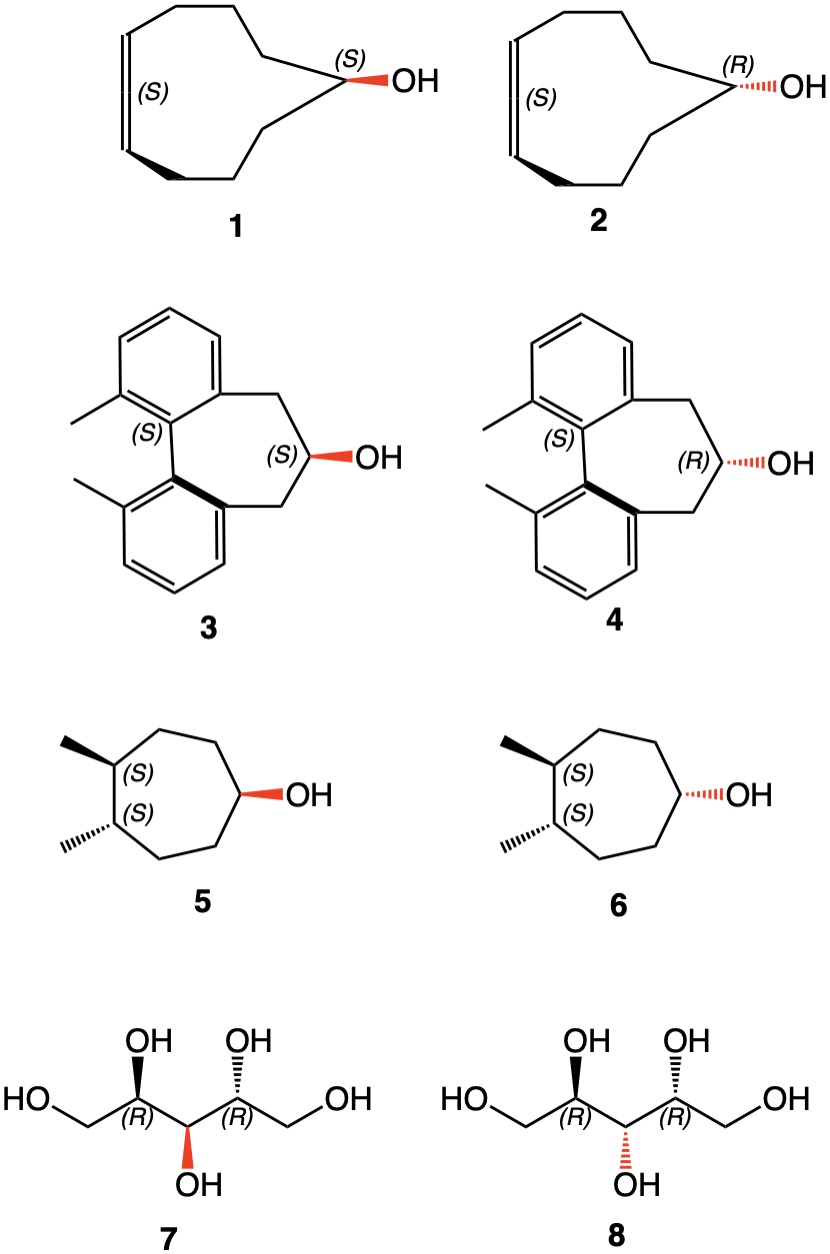 A minor issue is the use of the terms R/S when the intent is Ra/Sa. Indeed, IUPAC prefers the descriptors M/P. In this instance, the allenic component of 1/2 and the biphenyl entity in 3/4 would be designated as ‘P’ rather than ‘S’.

The helicity rule can also be applied to the stereogenic axis in allenes and biphenyls. Looking along the chirality axis the ligands are arranged in pairs. When proceeding from the nearer ligand having priority in the pair to the further away atom or group having priority in the pair, the chirality is described by the symbols ‘M’ if the path is anticlockwise; the symbol is ‘P’ if the path is clockwise. Stereodescriptors ‘M’ and ‘P’ are used in preferred IUPAC names. The lowest locant on the axis is cited before the stereodescriptor.

Browse other questions tagged organic-chemistry stereochemistry software chirality or ask your own question.

9
Why does nitrous acid exhibit (unexpectedly) different bond angles?
17
Number of diastereomer pairs of 1,3-dichloro-1,2,3-triphenylpropane
1
Why the H+ ion remains with the molecule even though there is no bond between it and hyperconjugative structure?
5
How to determine the number of stereoisomers of a di-substituted allene, exhibiting both axial and central chirality?
5
What is the problem with forming 2,3-dimethylcyclohex-2-en-1-one?
6
M/P nomenclature for axial-chirality
2
Is there a way to tell which one is the racemic or meso compound with 1H-NMR if all you had was the structure and spectra?
3
I'd like to model some compounds with DFTB, but some elements don't have parameter files in the official site. Is there a workaround?
7
Does 1,4-dimethylcyclohexane have a chiral center?