I had been studying on the stable conformers of ethylene glycol and ethane-1,2-diamine.

Due to hydrogen bonding in the vicinal $\ce{-OH}$ groups, ethylene glycol prefers to show gauche conformer. The same can be said for ethane-1,2-diamine in neutral medium.

My query arises for ethane-1,2-diamine in pH<7, where I expect the $\ce{-NH2}$ group(s) to be protonated. Can we predict the most stable conformer now for these cases? Does protonation affect the extent of hydrogen bonding?

organic-chemistry conformers
Share
Improve this question
edited May 6 at 2:03
Sung Jin-Woo
asked May 5 at 15:10

I'm not 100% convinced that both amines will protonate at the same time, since protonation of a charged molecule is different than the neutral. At the moment, I don't have the time to calculate the $\mathrm{p}K_\mathrm{a}$ of the first and second protonation.

But let's go with your assumption - that you have two $\ce{NH3+}$ groups. Interestingly, there's much less known about conformational preferences of charged molecules.. which is a project currently underway in my group.

Here's my initial guess .. that the $\ce{NH3+}$ groups would function like $\ce{CH3}$ sterically, and the positively charged groups would want to move as far apart as possible due to electrostatics: 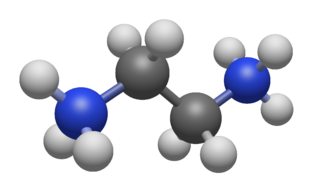 We can test this using quantum chemical methods. A tool called CREST performs driven molecular dynamics on the charged species, and returns anything within $\pu{X kcal mol-1}$ (The default is $\pu{6 kcal mol-1}$, which is what I ran).

And .. that's the lowest energy conformer. Nothing else is within $\pu{6 kcal mol-1}$ .. not only by removing the possible hydrogen bonding, but also because the two charged $\ce{NH3+}$ groups repel.