At the low-frequency limit, I would like to know how the value of $\epsilon_r (\omega)$ of water changes with temperature and salt ($\ce{NaCl}$) concentration. Please explain,

The relative electric permittivity of water at $20^oC$ under the effect of a static or low frequency is $\epsilon_r\approx80$. Hasted (1948) conducted an experimental study on the dielectric properties of salt-water solutions and observed a dielectric decrement with salt concentration. That is, the addition of sodium chloride to water results in a drop in electrical permittivity.

This can be understood by examining the following diagram. 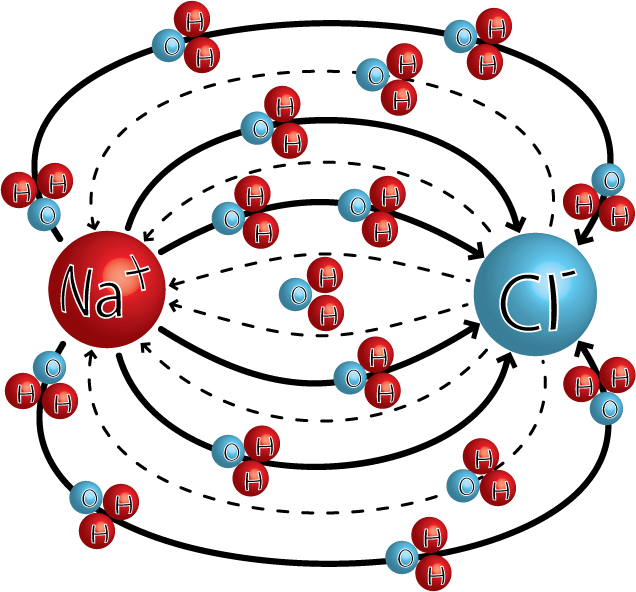 The sodium and chloride ions dissociate in solution, resulting in an an electric field between them (shown in bold line). The water molecules, which are polarised, get oriented under the effect of the electric field so that their oxygen atoms (carrying a partial negative charge) face toward the sodium ion and their hydrogens (carrying partial positive charges) face toward the chloride ion. This orientation of the polar water molecules causes its own electric field (dashed lines), which cancels out most of the electric field that would exist if the ions were in a vacuum. The end result is that the sodium and chloride ions are effectively 'sheilded' by a 'hydration shell' of polarized water molecules which effectively lowers their to the applied external field and hence lowering the dielectric constant (electric permittivity) as the ionic concentration increases ().

The above graph indicates that for a given salt concentration below about 3M, the electric permittivity decreases with temperature.

Not the answer you're looking for? Browse other questions tagged electrochemistry water electrolysis solvents electrical-properties or ask your own question.