Why is this diagram depicting the molecular orbital (MO) basis for a back-side attack the way it is? 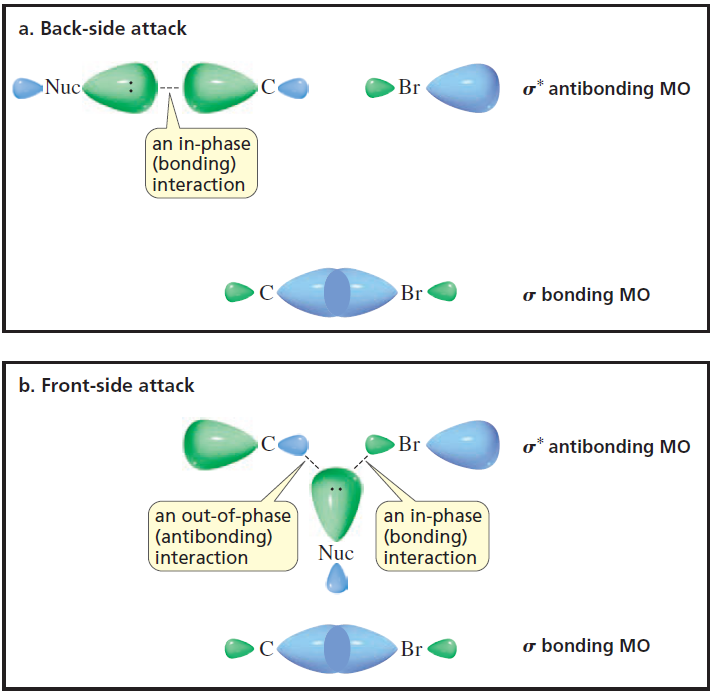 The description of this image in my textbook is as follows:

For reference, the nucleophile in the example before this is a hydroxide ion, and the electrophile-leaving group compound is $\ce{CH3-Br}$.

I was under the impression that C and Br had a normal sigma bond, but maybe it changes in the reaction mechanism? My textbook also says that Hughes and Ingold labeled this a concerted reaction from their experimental evidence, but the only way it makes sense to me at the moment is if a carbocation intermediate is formed.

I think the non-bonding and antibonding interaction is throwing me off. How does the interaction work in more detail? I feel like there is something obvious that I'm missing and it could be fairly simple, or that I am just overcomplicating things.

The diagrams in the book are not intended to state anything about whether the orbitals are filled or not.

but maybe it changes in the reaction mechanism?

Well, yes, it does. If electrons from elsewhere (in this case, the nucleophile, or hydroxide ion) flow into the antibonding orbital, then the maths above changes: essentially, you start to break the C–Br bond because (again, loosely speaking) the number of antibonding electrons increases. And that's the whole point of the reaction, after all — the C–Br bond is being replaced with a C–OH bond.

(It's a bit of a simplification to talk about integer numbers of electrons, but it'll do for now.)

My textbook also says that Hughes and Ingold labeled this a concerted reaction from their experimental evidence, but the only way it makes sense to me at the moment is if a carbocation intermediate is formed.