Is this idea valid?

I've already poked a hole into it by pointing out that electron donation to the "cage" is possible - i.e. consider carbonic acid with one hydroxyl group replaced by oxygen connected to a phenyl group. Valid resonance structures can be drawn in which electron density from the oxygen in the ester linkage participates in resonance with the electrons "in" the carboxylate group. So donation into the "cage" is possible. Now, this begs the question - is withdrawal from the cage possible as well? He insists no. Now, he might be hiding some edge cases for pedagogical purposes, but I don't care - if there is an exception - I want to know about it (because chemistry always gets interesting at the exceptions). 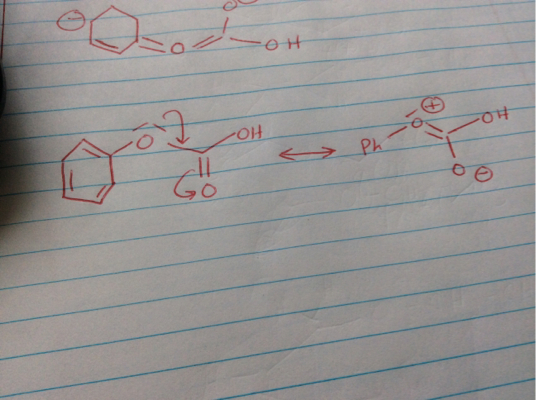 If I understand correctly, then I think your professor is correct.

within a carboxylate group such as in the benzoate anion

If it is phenyl carboxylate that we are discussing, then I think your professor is saying the same thing I wrote here. Namely, that the carboxylate anion (O-C-O with a negative charge) is analogous to the allyl system, and with 4 pi electrons $\ce{\Psi_2}$ is the HOMO. In the allyl system (and to a first approximation in this dioxallyl analogue) $\ce{\Psi_2}$ has a node (a "0" coefficient) at $\ce{C_2}$ (the central carbon atom). If there truly is a zero or very small coefficient at $\ce{C_2}$, then the substituent connected to $\ce{C_2}$ (your benzene ring) is effectively disconnected from the system and cannot interact with the MO via resonance.

Let's start by deciding what compounds we're talking about here. You reference an example by your instructor of benzoate, which is the conjugate base of benzoic acid.

The "carboxylate cage" essentially means that there is no way to delocalize the negative charge of the carboxylate into the aromatic ring. The only way to move electrons into the ring is from the C-O pi bond, which leads to (what I would consider) an unreasonable resonance structure, as it renders an oxygen both positively charged AND non-octet.

Carbonic acids are either a subset of carboxylic acids or a closely related functional group to carboxylic acids. Depending on what property you are interested in, they may be useful to compare or the difference might be too great. In this case, starting from the conjugate base of phenyl carbonic acid (as drawn in the question), there will be no way to delocalize the charge into the aromatic ring.