How would one express pemoline in terms of phenethylamine?

Pemoline is a psychostimulant that is no longer used in most countries. Similarly to the psychostimulants amfetamine and methylphenidate I can clearly see a phenethylamine backbone to this compound. I know it is also an oxazoline, but I am writing an article on my Wiki about substituted phenethylamines and their pharmacologic and structural properties so I would like to know what its chemical name would be in terms of its phenethylamine backbone. If you want an example of what I mean, see the current revision of my Wiki article on said drug [1] and look at the chemical names I have written. For example for methylphenidate the chemical name is N,α-butyl-β-methoxycarbonylphenethylamine.

My chemistry knowledge is only first-year university chemistry level, hence why I need your help as I don't know all the adjective forms of functional groups.

Below is the 2D structure of pemoline if you would like it in order to deduce its name in terms of phenethylamine. 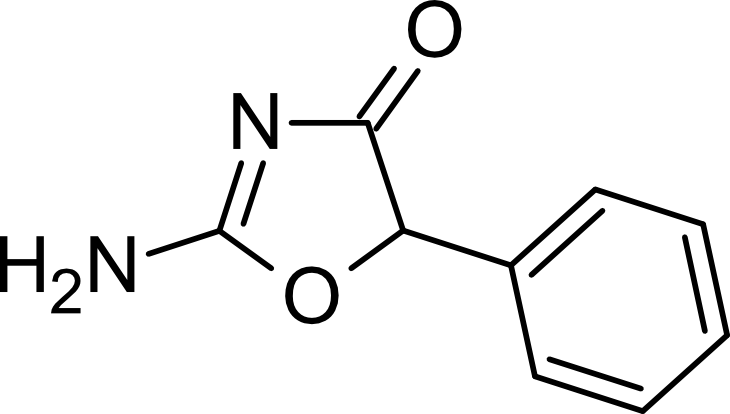 What you are really looking for is the concept of pharmacophore, that's structural and electronic features in a molecule that allow it to bind to a certain receptor.

If you squint at pemoline just right you can see an aromatic group, and two or three carbnos away you see a hydrogen bond acceptor, just as in phenethylamine, so you could argue that the pharmacophores are the same. At least both compounds act in some way on the dopaminergic system.

Another important concept to remember is polypharmacology. That means that one compound can act on different targets. A medical chemist would call these "off-target effects", and a physician would say "side effects". It's also that any biological system has many components - there are not only dopamine receptors, there are also dopamine transporters that regulate agonist levels in the synaptic cleft and allow for agonist recycling, and there is dopamine metabolism. Any compound that acts on any system might affect these components differently, consequently target identification is an important step in medicinal chemistry.

Your question is perhaps ill-posed (well, you are a first year student), but it probes really deep levels in med. chem.

I would like to know what its chemical name would be in terms of its phenethylamine backbone.

Artificial numbering and naming schemes that only exist in ones own cloud cuckoo land are pointless.

IUPAC nomenclature exists for a reason.

Besides the IUPAC nomenclature, other naming schemes - based on established (trivial) names exists and are widely used - for good reason and with acceptance by the scientific community. Typical examples are found in the field of natural products chemistry (steroids, alkaloids, etc.)

It is however crucial to understand that in these cases, prefixes and/or suffixes denote a variation of the underlying core structure, such as

In the current case, the central structure is a completely different heterocyclus, so markedly different from the original phenethylamine that it would not make any sense to apply a phenethylamine-based name here.

Neither would one try to apply such a naming scheme to the morphine skeleton - despite the fact that one might spot a six-membered ring with $\ce{CH2-CH2-NCH3}$ side chain here.

This does not mean that a member of the phenethylamine family is not among the ancestors of morphine in the biosynthesis! In fact, reticuline, a morphine precursor, most likely is a grandchild of dopamine.

But again, at a certain point structures have become so markedly different that a valid nomenclature (= valid for a particular compound class) no longer is applicable.

Trying to describe similarities between structures is not wrong, but trying to apply an inappropriate naming scheme is not helpful here.

Similarities between molecular entities should be expressed otherwise. For sequences (DNA, RNA, etc.), Hamming and Levenshtein distances can be used. For the title molecule and the whole dopamine/amphetamine class, I'd consider the comparison of their fingerprints (Tanimoto coefficients).

Not the answer you're looking for? Browse other questions tagged nomenclature drugs or ask your own question.

6
In what order should the compounds containing Ru and Os, or Mo and W be named?
1
What is the difference between 'particles', 'molecules' and 'chemical species'?
7
Naming ionic compounds with multiple cations and anions
13
Why was the prefix 'bi' used in compounds, such as for bicarb of soda?
3
Method of deriving some properties or possible method of synthesis of a specific monomer
1
Where can I find an extensive list of the preferred chemical nomenclature?
2
What do locants with prime symbols (e.g. 4’) mean?
10
What is the preferred IUPAC name of hexamethyldisilazane?