The reaction of carbon dioxide with water yields carbonic acid to some extent (0.4 %) depending on pressure (and temperature). 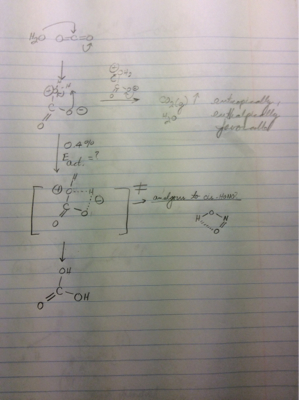 Now, the resulting species is a di-enol; we have hydroxyl groups attached to a carbon that bears a pi bond. This species is likely highly unstable due to the highly positive central carbon atom. On the other hand, neither hydroxyl group makes for a good leaving group, so I can't think of any "forward" (rather than reverse) pathways to more stable products. Also, I can't see the di-enol tautomerizing into a keto. Or can it?

Also, I was arguing that this species is analogous to cis-nitrous acid, in that both species involve a four-membered ring (or at least a psuedo four-memebred ring in the case of cis-HONO). Why does nitrous acid exhibit (unexpectedly) different bond angles?

I think most folks would understand what you mean, di-onal (alkene vs. ketone), since it is a carbonyl double bond, not a carbon-carbon double bond, that is involved, might be preferred.

3.Does this system provide a good parallel with regard to the case of cis-HONO?

My first reaction is that it is not a close analogy.

4.Are acid chlorides a good analogy to carbonic acid? In both cases the central carbon bears a strong partial positive charge.

My first reaction here was - no way. But the more I think about it, the more I see your point. They both react via similar mechanisms, you can draw that extra resonance structure with hydroxide or chloride ionized for both of them, you have to protect them both in order to store them. Guess I'd say there are a number of analogies between the two compounds.

Yes, when stored under the appropriate conditions (just like an acid chloride). To compare it's kinetic stability to some other compound, we'd need to find out what the activation energy for decomposition is. To compare it's thermodynamic stability, we'd need to calculate it's heat of formation and compare that to the heat of formation of water and carbon dioxide. P.S What is untrue carbonic acid?

3
What does reaction exothermicity say about the stability of molecules
4
Quantitative relationship between corrosiveness of acid and other properties
3
Do cyclic oxygen molecules exist and their theoretical stability?
26
What is the difference between dynamic and static electronic correlation
10
What is the difference between autocatalysis and self-replication in terms of chemical terminology?
3
What are the similarities and differences of adiabatic and diabatic states?
2
A theoretical framework for the formalization of chemical interaction and configuration based properties