Does the same name represents all resonance and hybrid structure of a molecule? 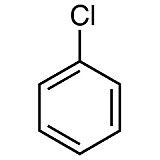 But the molecule shows resonance and its resonating structures are

So does the same name represents all the resonance structures? Does it also represent the hybrid structure of these structures? When I used this service to find the name of the last structure I found its name to be Chloraniumbenzenide. See this image. But interestingly when I used the same service to get back the structure from the name it gave me an error. Google search also didn't give good results.

One should be careful with the structures to be submitted to a structure2name conversion.

The one you showed for chlorobenzene are formally correct 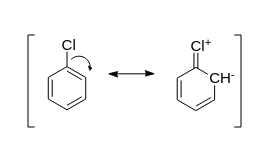 however the first one is the preferred one because it describes a structure lower in energy than the one with separated formal charges and charge separation costs energy. In addition to this, specific to this example, recall chlorine is more electronegative than carbon; in Pauling's scale (reference), EN(Cl) 3.16, EN(C) 2.55 - thus, it is not that likely chlorine would donate valence electrons to the more electropositive carbon.

Grossman condensed the (empiric) rules about resonance formulae to a set of four of decreasing order of importance. To quote (emphasis in the original):

Now you may set the description of e.g., DMSO

Not the answer you're looking for? Browse other questions tagged organic-chemistry nomenclature aromatic-compounds resonance or ask your own question.

48
What is resonance, and are resonance structures real?