The selenophene molecule is flat and aromatic. Being aromatic, it undergoes electrophilic substitution reactions at the 2- or 2,5-positions. These reactions are slower than that of furan, but faster than thiophene.

Selenium is a bulky 4th period element and I think the size of selenium is too large to have conjugation with carbon atom and make the compound aromatic. Why is selenophene still aromatic?

Further, faster electrophilic aromatic substitution (EAS) than thiophene sounds suspicious. Why and how?

Selenium — like sulfur — is a chalkogen/member of group 16. It is heavier than sulfur, and thus more metalloid. In this regard similar to the trend in the adjacent group 17 (the halogens) where iodine has more metal-like character than the other members, or group 15 (the tetrels) with carbon; yet silicon, germanium, tin, and lead. Thus, formally, selenophene is isoelectronic to thiophene, a with six π-electrons over five ring atoms an electron enriched heteroaromatic compund (compared to benzene).

«The electron count [of π electrons for the Hueckel rule], however, is not enough. Along with the number of requisite electrons, all the bond lengths in the ring must be the same or very similar, as in benzene. In five-membered heterocylces such as pyrrole, furan, and thiophene, the size of the heteroatom lone pair orbital must be similar to that of the $p$ orbital on ring π bonds. Both the requirements are not fulfilled in thiophene because σC–S bond is significantly longer than σC–C bond and, in comparison to the p orbital on carbon, the size of lone pair orbital on sulfur is too large to allow effective overlap.»

The discussion however isn't a new one. By older recordings, the aromaticity of tellurophen and selenophen were considered between the one of furan and thiophene: 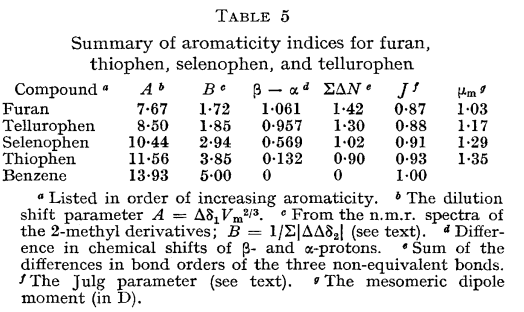 Note, Yadav's publication is behind a paywall for which our library has no subscription. I only was able to access the abstract above.

Not the answer you're looking for? Browse other questions tagged organic-chemistry aromatic-compounds heterocyclic-compounds aromaticity or ask your own question.