How does water sublimate at normal atmospheric pressures/conditions (i.e., without a phase boundary between solid and gas)?

I remember my high school chemistry teacher stating that water could sublime under normal atmospheric conditions that would exist in e.g., Lancaster County, PA, where Amish would hang clothes to dry in the winter in below-freezing temperatures. I do not remember a similar discussion in my physical chemistry (thermodynamics) class in college, but the former example stuck with me. If clothes do indeed sublime water at ca. 1 atm then that means there exists a vapor pressure of water (i.e., ice) below 0 °C at ca. 1 atm.

In looking into this, the USGS states that, "It is not easy to actually see sublimation occurring, at least not with ice. One way to see the results of sublimation is to hang a wet shirt outside on a below-freezing day. Eventually the ice in the shirt will disappear."

Yet, when I look at the phase diagram, 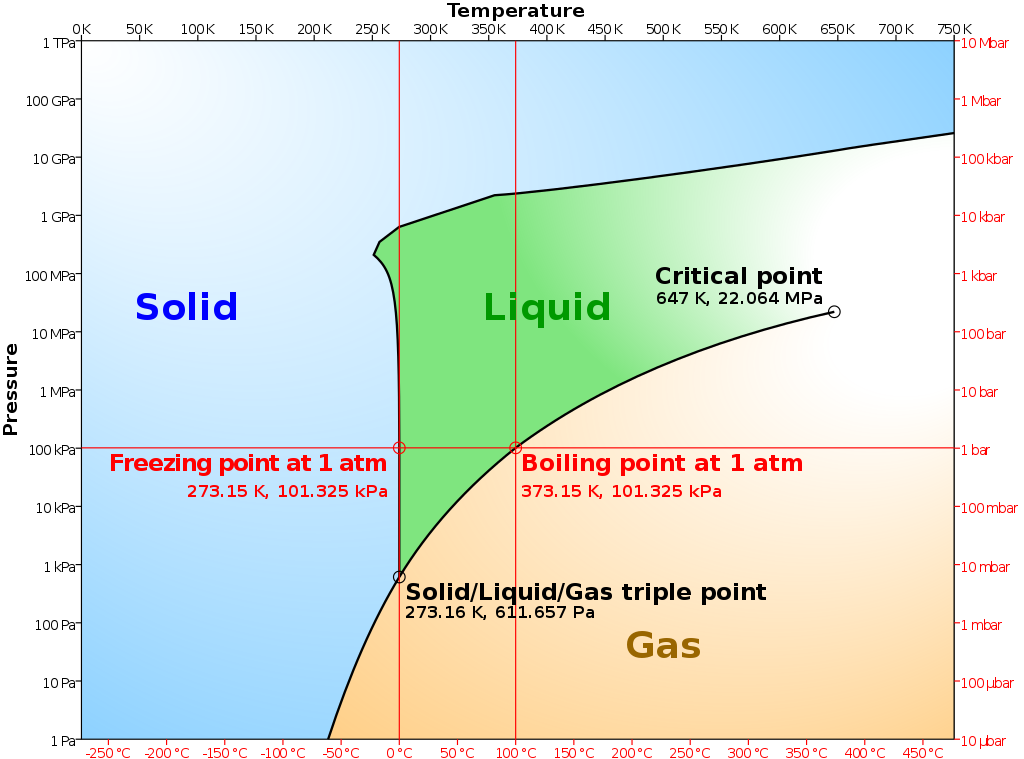 there is no path from solid to vapor at any temperature below 0 °C that is also anywhere near 1 atm. The highest pressure at which a phase boundary exists between solid and gas is 612 Pa, or 0.006 atm.

The USGS article goes on to discuss the south face of Everest and the Chinook winds sublimating snow and ice suggesting that it does indeed occur, though at admittedly much higher elevations (and lower pressure) than e.g., Lancaster, PA, but these are nowhere near the pressures you would have in e.g., lyophilizers I've used.

The only way I can come up with an explanation is if the "pressure" in the above phase diagram is somehow influenced by the partial pressure of water (i.e., "humidity") as opposed to or in addition to the net pressure of the system in total.

So the question is, if you are above 0.006 atm but somewhere between −60 °C and 0 °C where a phase boundary does not exist between solid and vapor/gas, how can water sublimate at ca. 1 atm in the example of drying frozen laundry? Additionally, is there a partial pressure of water at, e.g., −10 °C and 1 atm?

The only way I can come up with an explanation is if the "pressure" in the above phase diagram is somehow influenced by the partial pressure of water (i.e., "humidity") as opposed to or in addition to the net pressure of the system in total.

Yes, the graph is for pure gas and solid phase, with no substances other than water. If the gas phase is air (i.e. a mixture), you can have water at equilibrium between liquid and gas even at temperatures below the boiling point. To figure out the partial pressure of water in the gas phase, you can read off the vapor pressure from the graph by going down vertically until you hit the phase separation line. You would also have to interpret the graph different than for pure substances if the liquid is not pure water, or the solid is not pure water.

For any solid or liquid phase, if there is available volume above it, there will be a non-zero vapor pressure at equilibrium. The presence of other gases has very little effect on the value of this vapor pressure.

On your phase diagram, the y-axis represents the total external pressure, which can be from a gas phase or mechanical (eg a piston pushing directly on the surface of the solid or liquid). To find the partial pressure of $\ce{H2O}$ vapor (ie equilibrium vapor pressure at the given T), move vertically downwards from the point representing current conditions (ie keeping T constant) until you reach the boundary line with the gas phase. The P value at this point is the equilibrium vapor pressure at this temp for any value of external pressure.

Because the vapor pressures are low at low T, the density of $\ce{H2O}$ in the gas phase is very low so the amount of solid that needs to sublimate before equilibrium is reached is very very small for a small volume of pas phase. Thus, in order to dry something out completely, you either need a very large volume of gas phase, or you need to continually remove water vapor from the gas phase to maintain a non-equilibrium condition.

The lyophilizer uses the latter approach, constantly pumping the gas phase out so that the partial pressure of water vapor (which in a closed vacuum system rapidly becomes equal to total pressure because other gases are not replenished) remains below the equilibrium vapor pressure at the temperature of the sample chamber.

The winter clothesline uses the former approach, since clothes hanging outside are effectively surrounded by an infinite gas phase volume. Good air circulation/breeze is helpful to keep the local vapor pressure from increasing very much relative to the wider area. Of course, this only works if the ambient air is not already saturated with water vapor, ie a relative humidity of 100% (which is not uncommon in the morning in the winter in Pennsylvania, but usually is not the case by mid-afternoon). The lower the relative humidity, the faster the sublimation will occur.

Not the answer you're looking for? Browse other questions tagged thermodynamics water phase sublimation or ask your own question.

6
Drying Clothes Outside Below Freezing
5
What are the spectroscopic signatures that differentiate triple state water from water at 1 atm?
3
How can water exist in three states in freezing point?
2
Is it correct to say that SOME iodine undergoes sublimation at 1 ATM
3
At the freezing point, why is the vapor pressure of the liquid phase equal to the vapor pressure of the solid phase?
0
How do I select a sub-freezing temperature for my experiment that will allow the formation of frost, but not supercooled liquid water (rime)
2
Is it possible to have only liquid in a closed container?
3
Vapor pressure vs. ambient pressure