When pigments absorb light only around a single particular wavelength, why aren't they still white?

I'm trying to understand how organic molecules get their colour.

Now... My problem is, that if the last sentence is true, the pigment should still appear white/grey or, at best, have a very desaturated colour. The incoming light appears white/grey because the scalar products of the incoming power spectrum with the CIE 1931 colour matching functions all produce the same value. Introducing a narrow, deep dip in the incoming power distribution via photon absorption won't change these values enough to give a strong, saturated colour. (For the actual human cone sensitivity functions, white/grey light might not be represented by three equal values, but the argument is the same.)

To get a strong colour, the pigment would need to absorb a large portion of the wavelength spectrum. And looking at the absorption spectrum of, for example, beta-carotene, this seems to be the case: https://www.photochemcad.com/compound-detail.php?name=Beta-carotene
If the $\lambda_{max} = 451\mathrm{nm}$ stated there represents the energy required to cross the HOMO-LUMO gap, why are so many other wavelengths, which are "far away" from $451\mathrm{nm}$ also absorbed?

You are right that an individual transition from one state to another by absorption of a photon is connected to a very well defined energy. However, an absorption band in UV/VIS results from transitions between various energy states.

The situation can be much more complex than this short description. For example, also different electronic states can participate.

You might want to search for a Jablonski diagram for a visualization, e.g. here.

Color perception is a complex topic and one cannot make generalized statements.

If you are seriously investigating and want to have a deeper understanding, then get hold of a beautiful book called The Physics and Chemistry of Color: Fifteen Causes of Color by Kurt Nassau. It could be available on Internet Archive. It is a readible book without involving too much math.

The sky is blue for one reason, a Bunsen burner flame is blue for another reason, and the carrot juice is orange for another reason. The key criterion for a colored solid/ liquid or gas is to interact with visible light (~ 400 to 700 nm) in some way. There is no heavy restriction on how many wavelengths must be absorbed in for something to appear colored. There are a very few exception which something appears colored to us because of interaction with high energy particles, which are not visible us, but the interaction of those particles with matter leads to emission of light in the visible region.

When chemists talk about colors, they are usually talking about molecules in solution or in gas phase. Unlike gaseous atoms where only discrete wavelengths can be absorbed, like sodium vapor, molecules have vibrational and rotational excited energy levels besides electronic energy levels. If you excite molecules with visible light a broad range of wavelengths can be absorbed just like your beta carotene example. Consequently, this assumption

But, as far as I understood it, it is a very narrow energy band that gets absorbed.

is not right. Molecular absorption in solution or gas phase is pretty broad. I am avoiding solids. There you have to deal with their reflectance spectra. We are focussing on absorption/ transmission spectra.

One of the best examples of colored gas is that of molecular iodine vapor. It has a striking violet color. Photo credit here 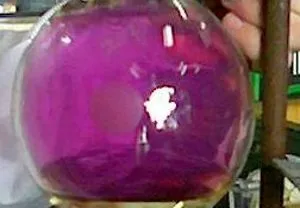 Since the vapor is appearing colored to us, it must be interacting (absorbing in this case) with light wavelengths in the range 400-700 nm. Have a look at this absorption spectrum here. The iodine molecule in the gas phase absorbs green to orange portion of the visible spectrum. As the result, transmitted light from iodine vapor looks violet. 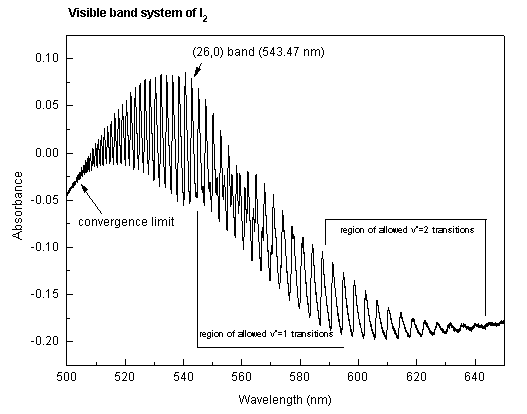 Atomic spectra have sharp lines when the atoms are in the gas phase. One example is the absorption of sunlight by gases on the surface of the sun. The sunlight appears white, especially when observed in outer space. However, there a various species absorbing the light at specific wavelengths, allowing spectroscopists to infer the composition of the sun's surface. 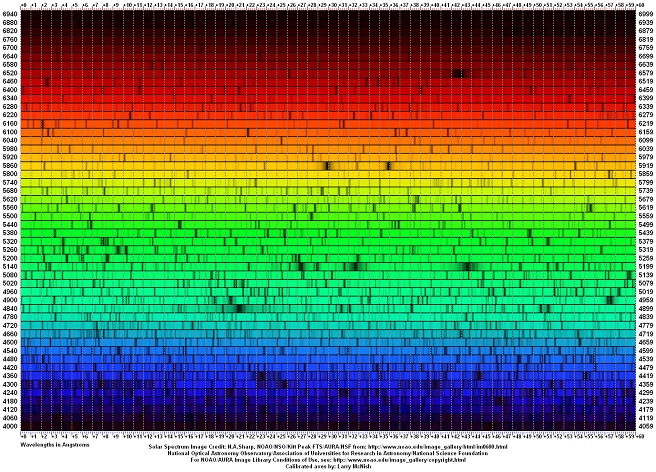 On the other hand, visible and UV absorption of samples in the liquid or solid phase are often broad. Typically, these also arise from electronic transitions, but those of valence electrons. The energy of the electronic states of valence electrons depends on bond lengths and angles (i.e. couples with vibrational states) and intermolecular interactions (i.e. will be different from molecule to molecule).

To get a strong colour, the pigment would need to absorb a large portion of the wavelength spectrum.

Yes, so atomic absorption does not change the perceived color much. On the other hand, atomic emission results in clear bright colors like in fireworks or flame tests.

As others have brought up, indeed the absorption features of most compounds with electronic transitions in the visible light range are rather broad, and this breadth is important in generating a perceived colour.

But what would happen if you somehow had a substance which acted as an "anti-laser", where somehow a very tiny sliver of a white light spectrum were absorbed? What would that look like?

As it turns out, the solar spectrum is already full of "holes", called spectral lines. These are caused by isolated atoms in the gas phase in the solar atmosphere. Because these absorption features are caused by electronic transitions in single isolated atoms, effects capable of broadening the absorption of the electronic transition lines are much more limited. For example, the solar spectrum has dark slivers at 589.158 nm and 589.756 nm, corresponding to electronic transitions of isolated sodium atoms. These "holes" in the solar spectrum are very thin, covering a wavelength region on the order of 0.001-0.01 nm wide. There are hundreds of these holes in the spectrum of sunlight, even when measured without the additional complicating effects of Earth's atmosphere. Of course, this doesn't stop sunlight from looking white, as you suspected.

To make this all seem a little less esoteric, there is a rough but rather interesting experiment which can be performed, as shown in this Youtube video. A crude gas of sodium atoms can be created simply by adding table salt to a flame. When illuminated with white light, there is nothing out of the ordinary. However, if illuminated with a sodium lamp, suddenly the fire becomes dark, almost black. What's happening is that the sodium gas in the flame is absorbing photons of exactly 589.158 nm and 589.756 nm wavelength, and if your light source contains those photons almost exclusively, then you can clearly notice their absence. But importantly, the flame was always absorbing these photons - it's just that with a white light you couldn't really see the effect, it made virtually no difference to the overall white light spectrum.

You might now be wondering whether "white" sunlight can truly be considered "white", or whether there is a "whiter" light source. In principle, you could generate an almost perfect Planck-distributed blackbody spectrum with the same colour temperature as the surface of the Sun (~5700 K) and you could imagine comparing the perceived colour of this blackbody spectrum and actual sunlight. These will almost certainly be indistinguishable to the human eye.

Not the answer you're looking for? Browse other questions tagged organic-chemistry molecular-orbital-theory color absorption or ask your own question.

1
Can I make UV-Vis calibrant in the lab?

4
A molecule absorbs light having a specific wavelength, why doesn't it absorb shorter wavelengths?
7
Why does the light catalyzed radical addition of tetrachloromethane to an alkene produce only a single regioisomer?
2
What explains the stark white colour of my iodometric titration analyte solution?
2
What gives rise to the color of sapphires?