Structure of 1,4-dioxin is:

Wikipedia page says that it is non-aromatic.

In a planar structure, obviously there will be 8 (= $4n$) pi electrons in conjugation, making it antiaromatic, contrary to what Wikipedia says.
Also, I feel the molecule has a decent chance to break antiaromaticity by becoming non-planar i.e. if the left half of the molecule bends at an angle to the right half, like a semi-open book. That is a structure which would preserve the planarity of individual $\mathrm{sp^2}$ carbons, while allowing oxygen atoms to have a bond angle corresponding to $\mathrm{sp^3}$ hybridization.

Where is my reasoning wrong? What is the actual nature and structure of this molecule? References would also be appreciated.

Aromaticity is a fuzzy subject and there are no strict mathematical rules. There is no recognised unilateral theory that does explain it. This becomes a real issue when we are dealing with compounds that are generally hard to describe. One such compound is 1,4-dioxin.

This makes it a very unfortunate battle ground for dogma, which the answer provided here and comments following are proof of. You cannot draw a line and multiple textbooks have published and teached a romanticised version of this topic. It is way more complex than drawing a molecule and counting π-electrons (which strictly do not exist but are rather electrons in π-orbitals).

The concept of spatial and electronic structure of cyclic molecular systems displaying the effects of cyclic electron delocalization which provide for their enhanced thermodynamic stability (relative to acyclic structural analogues) and tendency to retain the structural type in the course of chemical transformations. A quantitative assessment of the degree of aromaticity is given by the value of the resonance energy. It may also be evaluated by the energies of relevant isodesmic and homodesmotic reactions. Along with energetic criteria of aromaticity, important and complementary are also a structural criterion (the lesser the alternation of bond lengths in the rings, the greater is the aromaticity of the molecule) and a magnetic criterion (existence of the diamagnetic ring current induced in a conjugated cyclic molecule by an external magnetic field and manifested by an exaltation and anisotropy of magnetic susceptibility). Although originally introduced for characterization of peculiar properties of cyclic conjugated hydrocarbons and their ions, the concept of aromaticity has been extended to their homoderivatives (see homoaromaticity), conjugated heterocyclic compounds (heteroaromaticity), saturated cyclic compounds (σ-aromaticity) as well as to three-dimensional organic and organometallic compounds (three-dimensional aromaticity). A common feature of the electronic structure inherent in all aromatic molecules is the close nature of their valence electron shells, i.e., double electron occupation of all bonding MOs with all antibonding and delocalized nonbonding MOs unfilled. The notion of aromaticity is applied also to transition states.

The IUPAC Gold Book gives us another definition under the term aromatic (https://doi.org/10.1351/goldbook.A00441):

Monocyclic planar (or almost planar) systems of trigonally (or sometimes digonally) hybridized atoms that contain (4n + 2) π-electrons (where n is a non-negative integer) will exhibit aromatic character. The rule is generally limited to n = 0–5. This rule is derived from the Hückel MO calculation on planar monocyclic conjugated hydrocarbons (CH)m where m is an integer equal to or greater than 3 according to which (4n + 2) π-electrons are contained in a closed-shell system. [...]
Systems containing 4n π-electrons (such as cyclobutadiene and the cyclopentadienyl cation) are 'antiaromatic'.

Unfortunately this definition also has some issues (especially the chosen terminology which I consider wrong), but I do not want to go deeper into that.
However, it must be noted that from a purely technical point of view the last sentence is misleading. Cyclobutadiene as it exists is not an antiaromatic molecule, because it avoids this destabilisation by distorting. So there is a conundrum.
For that reason, it is safer to ignore this sentence.

On the DF-B97D3/def2-SVP level of theory (and all others I have checked), 1,4-dioxin is planar. Also for all intents and purposes it does not matter whether it is perfectly planar or slightly distorted. Therefore, for the sake of this argument it is planar. 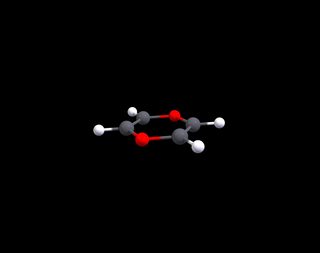 In this special case, it has D2h symmetry.

The molecule is a monocycle.

Let's have a look at the π-orbitals. In the following the blue/orange ones are doubly occupied, the red/yellow are virtual orbitals.

We can see that (in this framework) all atoms are trigonally coordinated (or bent). We can count the occupied orbitals, 4, and hence have 8 π-electrons.

From this alone, applying only the definitions, the molecule must be antiaromatic.

The problem with antiaromaticity arises that two (or more) degenerate orbitals are singly occupied in such hypothetical structures and that there is at least another structure that is lower in energy that doesn't have this problem.

Let's take cyclobutadiene. If all carbon carbon bonds were the same, it would have D4h symmetry and there are degenerate orbitals half occupied. A structure with different bond lengths doesn't have resonance stabilisation, but it also doesn't suffer from the degeneracy issue. This rectangle-like structure is lower in energy than the hypothetical one that is 'antiaromatic'.

For 1,4-dioxin we do not have this problem. The orbitals are not degenerate. The two oxygen break symmetry enough so that fürther distortion is not necessary.

Here are the energies of the orbitals shown above:

Let's circle back to Hückel. This rule is best understood as a guideline to explain aromaticity after the fact. It is not a good predictive tool. Heteroatoms were not included when this rule was conceived.
Most aromatic molecules do not follow Hückel's (4n + 2) rule, but are still considered aromatic.
If an experiment says a compound lacks the characteristics of an aromatic molecule, it isn't. I do not have access to the source Wikipedia cites, but it appears to be a study on exactly that issue.

Assuming the structure is indeed planar*, the presence of two oxygen rather than carbon atoms as one opposing pair breaks the symmetry and therefore breaks the orbital degeneracy on which the 4n+2/4n rule is based.

*The JSMol structure given in the WP Infobox shows the oxygen atoms very slightly out of the plane of the carbon atoms. Below is an eclipsed view taken from the Interactive Image: 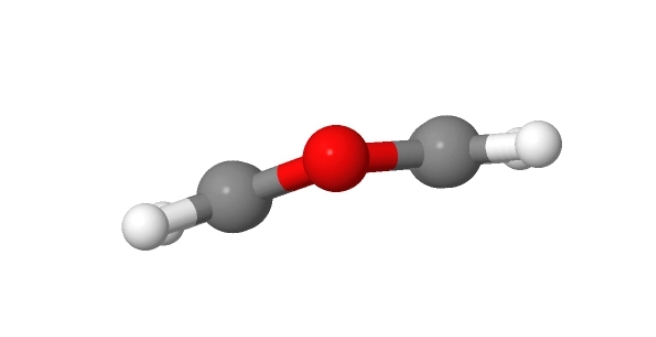