How to determine number of structural isomers?

How can I determine the possible number of structural isomers of a given organic compound?

It isn't easy but it is an interesting research topic

Determining the number of possible structures for a given range of chemical formulae isn't simple even for saturated hydrocarbons. The number of possible structural isomers rises rapidly with the number of carbons and soon exceeds your ability to enumerate or identify the options by hand. Wikipedia, for example, lists the numbers of isomers and stereoisomers for molecules with up to 120 carbons. But the counts are getting silly even at 10 carbons where there are 75 isomers and 136 stereoisomers.

It has been an interesting research topic in computational chemistry and mathematics. This old paper (pdf), for example, list some formulae for simple hydrocarbons among other simple series. Part of the interest arises because of the relationship to the mathematics of graph theory (it seems that chemistry has inspired some new ideas in this field of mathematics partially because enumerating possible isomers of hydrocarbons is strongly related to drawing certain simple trees which is intuitively obvious if you use the standard chemical convention of drawing just the carbon backbone and ignoring hydrogens).

You can look up the answers on the fascinating mathematics site OEIS (the online encyclopaedia of integer sequences). The sequence for simple hydrocarbons is here.

But the mathematical approach oversimplifies things from the point of view of real-world chemistry. Mathematical trees are idealised abstract objects that ignore real-world chemical constraints like the fact that atoms take up space in three dimensions. This means that some structures that can be drawn cannot exist in the real world because the atoms are too crowded and cannot physically exist without enough strain to cause them to fall apart.

Luckily, computation chemists have also studied this. There is, unfortunately, no obvious shortcut other than trying to create models of the possible structures and testing them to see if they are too strained to exist. The first two isomers that are too crowded are for 16 and 17 carbons and have these structures:

If you have any intuition of the space filling view of these, you should be able to see why they are problematic. A research group at Cambridge University has produced an applet to enumerate the physically possible isomers for a given number of carbons which is available here if your Java settings allow it. The results are discussed in a paper available in the Journal of Chemical Information and Modelling. 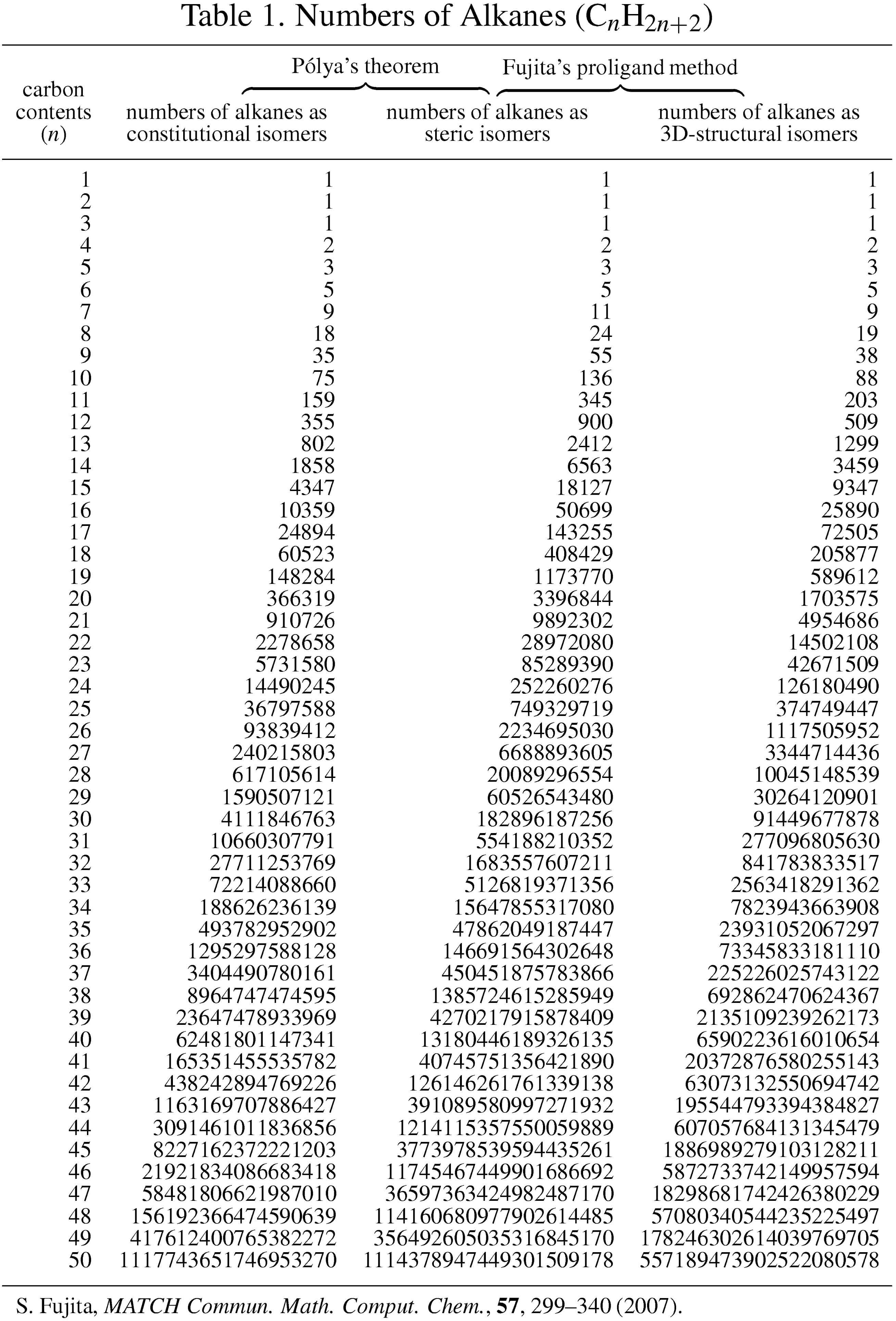 On the other hand, the number of alkanes ($\ce{C_nH_{2n+2}}$) as three-dimensional (3D) structural isomers and as steric isomers is calculated by Fujita's proligand method (S. Fujita, Combinatorial Enumeration of Graphs, Tree-Dimensional Structures, and Chemical Compounds, Unversity of Kragujevac (2013)). In the process of calculating 3D structural isomers, one achiral molecule or one pair of enantiomers is counted just once, where achiral molecules and chiral molecules (enantiomeric pairs) are differentiated from each other. 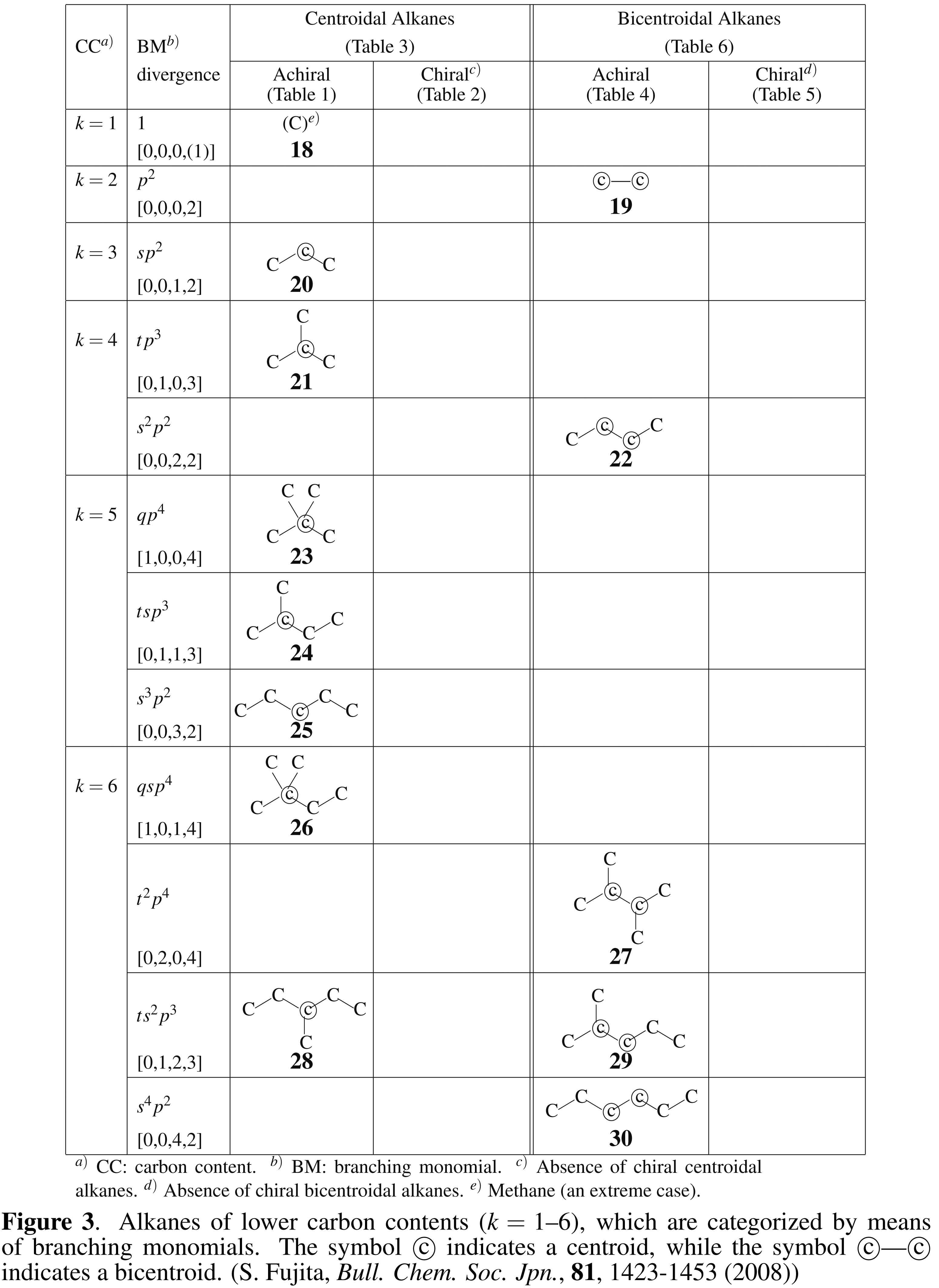 This is a start towards a partial answer, but I tried to count the isomers of methane through nonane, and only by moving methyl groups around, each "branch" is only 1 CH3. I noticed a pattern in the number of 1 branch, 2 branch, 3 branch, and 4 branch isomers. Don't know how accurate these numbers are or how well this pattern holds up.

As far as I am aware, there is no straight up formula. Obviously there are very general trends, but not precise enough to tell you the number of isomers.

If you need to decide how many isomers something has, I suggest you either do it manually or use a programme like this: http://www-jmg.ch.cam.ac.uk/tools/isomercount/

We can calculate the number of structural isomers by double bond equivalent i.e by using the formula:

where $n$ repesents the number of atoms $i$ of a given valency, and $v_i$ represents these atoms’ valency. Example:

0
Constitutional Isomers
0
How do you predict isomers for certain hydrocarbons?
22
Why do some chemical reactions require many steps?
13
Largest alkane having a given alkane as its base name
3
How can I find all possible isomers of a given molecule?
6
Is there a formula to determine the total number of constitutional isomers?
3
Why don’t we have a list of all compounds yet?
3
Tetra-tert-butylmethane
1
(Hydro)Carbon organic compounds with only 5 carbon atoms only and beyond
1
Number of alkanes which are chiral
See more linked questions