Is the colour of leaves due to d-d transitions in chlorophyll?

While reading a chapter on transition metals, I came to know that d-Block elements have colour compounds due to d-d transitions. A question came to my mind as to whether there is any d-d kind of transitions in plants as they also show characteristics colours.

I know the green colours of leaves is due to presence of chlorophyll and also there are coloured pigments in plants.

I may be wrong in my thought, but I really want to clarify my doubt.

Let's rephrase your hypothesis and test it:

The green colour of leaves results from a d-d transition of the central atom of metal complexes known as chlorophylls.

Green leaves contain two types of chlorophyll, Chl a and Chl b, both have $\ce{Mg}$ as the central atom and show two distinct bands in the UV-VIS absorption spectrum.

Now imagine that Chl a is treated with weak $\ce{HCl}$. In the resulting product, known as Pheophytin a, the central atom ($\ce{Mg^{2+}}$) is replaced with two protons.

In the UV-VIS absorption spectrum, however, we would still observe the two bands. They are slightly shifted and show somewhat different extinction coefficients, but the pattern is fundamentally the same.

We may conclude that our initial hypothesis is wrong. If it is not the absorption of the central atom in our complex, the ligand must be responsible.

Our new working hypothesis therefore is:

The colour of green leaves results from the absorption of the polycyclic pheophytin ligand and its extended $\pi$ system.

Let's simplify the Pheophytin a molecule: Removal of the E ring and replacing all the fancy substituents with ethyl groups leads to octaethylporphyrin as the core structure. 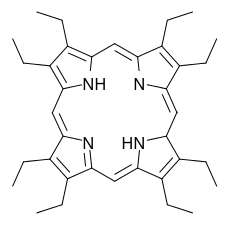 In the UV-VIS spectrum, we would still be able to see the strong Soret band, which corresponds to a $\pi,\pi^*$ transition from the ground state to the second excited singlet state ($S_0 \rightarrow S_2$).

Not the answer you're looking for? Browse other questions tagged everyday-chemistry transition-metals photochemistry or ask your own question.

-7
Does the green color represents existence of Copper in it

8
What is the origin of the colour of azo dyes?
0
Colour in vanadyl sulfate
2
Flame test for copper salts
4
What is the explanation of the energy gap law in radiationless transitions?