Index of Hydrogen Deficiency for para-Toluenesulfonylchloride

In para-Toluenesulfonylchloride, there are 5 pi bonds and 1 ring. This suggests a IHD of 6. However, the actual IHD is 4. How come?

Is it because the formula IHD = rings + pi bonds does not apply to compounds containing sulfur? If not, what formula do I use? I have this formula:

Using this formula yields a IHD of 4.

because sulfur uses all six valence electrons in this case.

Because of it's ability to exist as higher oxidation states than the second row elements, I don't believe that there is any way to include sulfur in the IHD formula unambiguously. Consider the following two compounds, toluenesulfonyl chloride and an isomer. 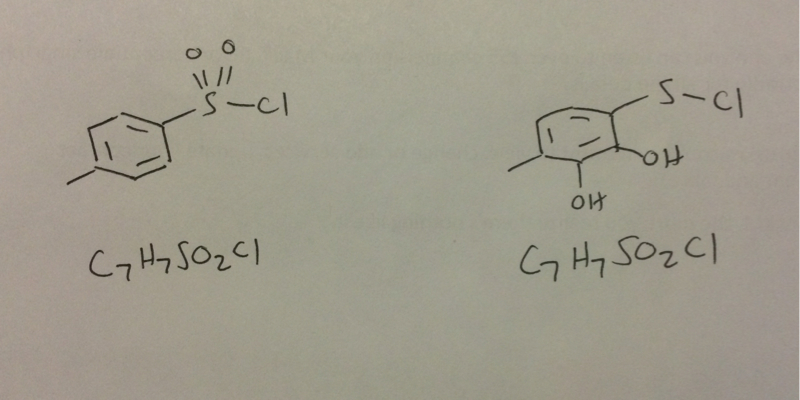 I think the best way to handle third row (and beyond) is to treat the large atom as if it were it's second row analog (P->N, S->O, etc.), and use the result as the lower limit on the IHD.

6
What does the ZZE tag in an Chemical Table file refer to?
22
Electrophilic Aromatic Substitution: Are protonated OH-groups ortho-/para- or meta-directing?
2
Why does fusing benzene rings not produce polycyclic alkynes?
3
Difference between any arene and an aromatic compound?
6
Is a pyrylium ring aromatic?
4
HOMO-LUMO and perturbation theory
5
Most activated position for Electrophilic addition in substituted biphenyls
10
What would the chemical name be for C13H8Cl3NO