Why do diluted sulfuric acid and hydrogen peroxide etch copper only when chloride ions are present?

I've mixed 30 ml 10% sulfuric acid with 20 ml 3% hydrogen peroxide and put a drop of this solution onto copper foil. The solution quickly removed the oxide layer from the copper but did not dissolve it any further within the hour that I left the drop on the copper. When I wiped the solution off with a white paper towel, I couldn't see any blue or green tint, indicating that there was (almost) no copper dissolved in the solution.

After that, I added (roughly) 100 mg of sodium chloride to the solution and again put a drop of it onto the copper foil. (To clarify, I put 100 mg sodium chloride into the entire remaining ~50 ml of solution.) It began to oxidize and dissolve the copper, turning its surface brown. When I later wiped the solution off, the paper towel was stained greenish-blue.

I've been unable to find any explanation for this even after an hour of googling. I've found this Chemistry Stack Exchange answer that deals with a similar reaction; however, it doesn't explain the role of the chloride ions.

Why does this solution only dissolve copper when chloride ions are present? (That is, how does the chloride help oxidizing the copper and why isn't hydrogen peroxide enough?)

I've got three theories, but I have no idea which of them (if any) is correct. (I'm sadly not a chemist.)

Note that if some oxidant is stronger thermodynamically ( a higher redox potential), it does not necessarily mean it oxidizes faster, as reaction kinetics aspects play their role as well.

Chlorine reaction with copper in acidic solution -- $\ce{Cl2 + HCl}$ dissolves gold as well -- is faster than with hydrogen peroxide. The formation of copper(II) chlorocomplexes helps too.

Forming oxoacids of chlorine in acidic solution is not preferred, if there are chlorides yet.

For the record, only hot concentrated sulfate acid directly reacts with copper metal, otherwise, the chemistry around copper can be quite complex including the role of chloride to otherwise facilitate the reaction.

Here is a sourced exposition which I would recommend for graduate students/researchers to assist in answering the question on the role of chloride and more insights in copper related reactions.

So, the chloride serves certainly in the role of an electrolyte.

An associated copper electrolysis based reference which notes on Page 15, for example, the half cell reaction (which is implied per the above) for copper (and noted other metals), namely:

The above simple copper metal reaction with oxygen and an acid source also strongly suggests a basic salt formation as can be actually found in Equation 7 per a Wikipedia discussion on Dicopper chloride trihydroxide with respect to the commercial preparation of the basic copper salt. This source interestingly cites the use of $\ce{NaCl}$ as a complexing tool to form a soluble mixed cuprous compound. So, the second answer on the role of chloride is as a complexing agent.

Actually, this associated electrochemical oxidation reaction occurs correspondingly not only with iron but several other transition metals as well, as noted below:

Interesting and supportive, the above noted electrolysis reaction with copper can also be derived from a series of radical chemistry reactions. Namely, per a 2013 radical reaction supplement, "Impacts of aerosols on the chemistry of atmospheric trace gases: a case study of peroxides radicals", I cite the following reactions:

Where the implied net reaction, in the case of copper, confirms the claim reaction above, namely, a net reaction of:

where the reactions above clearly suggest again the need for a soluble cuprous presence.

The mechanics of the etching of copper with $\ce{H2O2}$, $\ce{NaCl}$ and a acid source would not be likely complete without noting the role of radicals created via a Fenton-type reaction with copper:

which notes, of import here, the formation of the hydroperoxyl radical (•HO2, pKa 4.88), which is interestingly, a very acidic radical as noted in this article: "Radical-Enhanced Acidity: Why Bicarbonate, Carboxyl, Hydroperoxyl, and Related Radicals Are So Acidic". The acidic hydroperoxyl radical could be an explanation of the reaction proceeding even with select weak (as in chelating) acids, which again requires a soluble cuprous as provide by chloride.

As well as no free chlorine presence per the reaction:

However, the superoxide radical anion and at pH < 5, the hydroperoxyl radical, are still found in solution per this work.

I hope this helps to explain the role of chloride in the reaction's progression, which is still a matter of ongoing research.

It is entirely possible that the reaction mechanism is affected by oxidation of the copper, not the chlorine.

Copper is often reported to have only +2 as a stable oxidation state, the +1 state tending to disproportionate. This is true in the hard-base environment of water solvation, but with softer bases a rather different outcome emerges. Iodide ion is well known to reduce aqueous copper(II) to a precipitate of copper(I) iodide, rather than to the metal. Thiourea forms a soluble copper(I) complex in a similar way; we see this complex (or rather, we don't see it) when a solution of copper(II) sulfate is de-color-ized by adding thiourea.

Chloride ion is less soft and nonreducing towards copper (and towards the acidic peroxide) but still has a stabilizing effect. Compare the Pourbaix diagrams[1] for copper solvated by water alone:

with that obtained when chloride ion is added at unit activity: 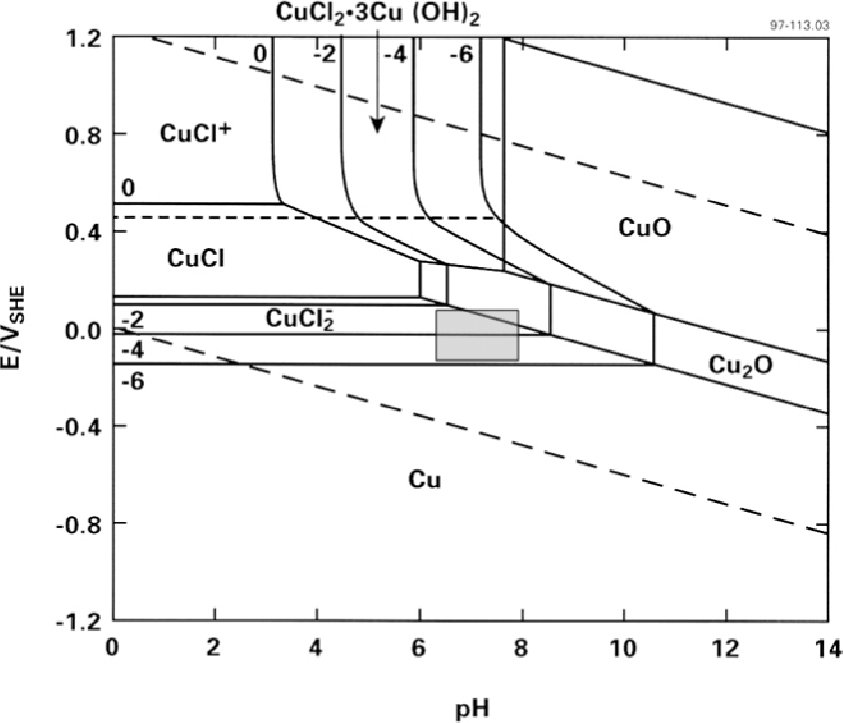 With only water solvating the copper, copper(I) is a metastable species in the presence of the metal, which is stably oxidized directly to the +2 oxidation state. But with the chloride ion present the copper is oxidized directly to sparingly soluble copper(I) chloride instead, with a soluble complex formed at low concentrations just below that field. With the stabilized copper(I) species thus available, copper becomes appreciably dissolved at a lower potential and therefore with lower activation energy with the chloride ion addition than without.

1. King, Fraser. (2010). Critical review of the literature on the corrosion of copper by water. https://www.researchgate.net/publication/242469529_Critical_review_of_the_literature_on_the_corrosion_of_copper_by_water

19
Why copper(I) is unstable in aqueous medium?
6
Full equation when using vinegar, hydrogen peroxide, and salt to etch copper
7
Understanding sodium hydroxide drain cleaner's exothermic dissolution of aluminum; does the aluminum need to be oxidized before it dissolves?
-5
Which ion is more stable in aqueous solution; Co2+, or Co3+?
0
Dominance of electronic factors in cupric ion
0
stability of Cu(II), Cu(I) and Zn(II) ion