Can osmium react with oxygen at room temperature?

I’m looking to buy some osmium, as it’s one of the heaviest and hardest metals out there.

However, people online told me to avoid buying it, because it could react with oxygen naturally and become its acute toxic oxide.

However, from doing my own research, it seems it only oxidizes at 200 °C, which I doubt my metal vials will ever reach.

Can this be confirmed? Would it be safe to just store 99.99% pure osmium out in the open?

Of the platinum metals, osmium is the most rapidly attacked by air. The powdered metal, even at room temperature, exudes the characteristic odour of the poisonous, volatile tetroxide, OsO4.

Osmium tetroxide is remarkably toxic and is not good stuff to have out in the open. Do not do this!

As the others already stated, handling pure Osmium is too dangerous at home, but there are shops that offer small samples of elements sealed in acrylic glass, which is supposed to be safe. Maybe this would satisfy your collectory needs ;-) 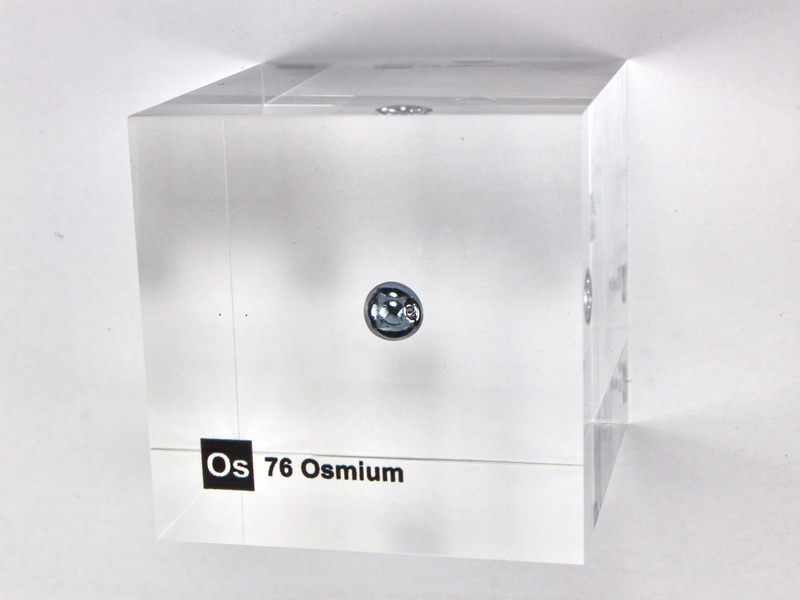 I'm not promoting this specific shop, this was just the first google hit.

Finely divided metallic osmium is pyrophoric[1] and reacts with oxygen at room temperature, forming volatile osmium tetroxide. Some osmium compounds are also converted to the tetroxide if oxygen is present.[1]

Osmium does not really differ from most metals by reacting with air at room temperature. But in most cases such as iron the oxide remains solid on the metal surface and -- if we avoid conditions that may break down the oxide chemically such as moisture, or trigger electrochemical reactions such as residual salts -- the solid oxide film will provide protection against extensive reaction. In contrast, the volatile oxide formed by osmium when it reacts with air vaporizes off and provides no such protection, and thus formation of the toxic oxide fumes continues. Most osmium is used in the form of alloys whose base metals form solid oxides.

You may just want to extract the writing point from a fountain pen and call it a day.

It can! Please think twice before ordering osmium. The oxide is volatile and extremely toxic: one good huff is enough to give you severe pulmonary edema, and make you drown in your own body fluids several hours after the exposure. Contact with eyes will make you permanently blind by turning your corneas black and opaque.

However, the most danger is in handling osmium powder. The real danger is in handling osmium powder. Meanwhile, the question explicitly suggests that the bulk form of osmium is being considered: OP says "I love shiny rocks", not "I love dull gray powders". Also, all the sellers of elements for collection that I know of tend to sell osmium in the bulk form: cubes, pellets and nuggets, not in powdered form. I wish more people were actually reading the questions, instead of just quickly glancing over the title and copy-pasting two sentences from the first Google hit.

Formation of $\ce{OsO4}$ from osmium metal in room temperature is thermodynamically unfavorable. Handling bulk osmium is not nearly as dangerous. Be careful, though! While the majority of metals is ductile and malleable, some exceptions -- including osmium -- are brittle. Instead of deforming under mechanical stress, they shatter into small pieces, greatly increasing the surface area that could react with oxygen in the air!

Here is a video of a man handling bulk osmium nugget. Notice that he is wearing gloves. He has since been recently active, and is alive and well.

It is a bit of a shame that the accepted answer does not really make any effort to actually answer your question and does not even differentiate between powdered and bulk osmium. Instead, it just copies two short sentences from an external source.

Not the answer you're looking for? Browse other questions tagged oxidation-state elements toxicity or ask your own question.

4
Why is osmium(VIII) oxide so toxic?
4
What noble metal is most resistant to oxidation by diatomic oxygen in air at room and elevated temperatures?

0
How do I know with which oxidation numbers I can form a certain kind of compound?
8
Can we recycle garbage with the principles of mass spectrometry?
2
Why does bromine react with iron(II) but not iodine?
2
How will metallic lithium react with atomic oxygen?
0
Why is oxygen oxidized with lead instead of being reduced?
1
How can I prove ascorbic acid degradation with Uv-vis spectroscopy?