Why isn't the aniline hydrolysed in Sanger's protein sequencing method? 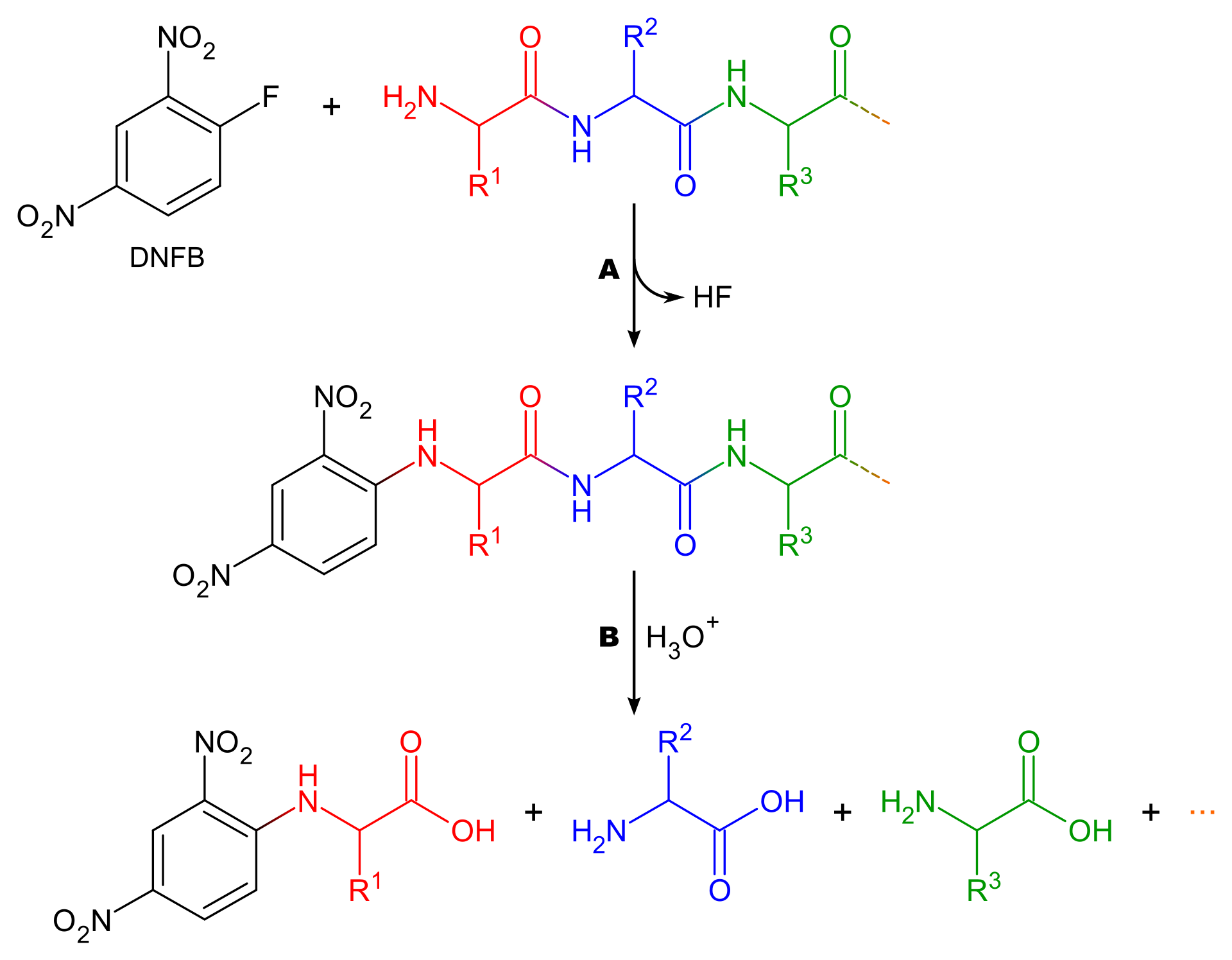 The free N-terminus amino group performs a nucleophilic aromatic substitution to get the first product; after that we hydrolyse the adduct. Why doesn't the Ar–N bond in the final product also undergo hydrolysis to give 2,4-dinitroaniline, though? There are many examples (e.g. isocyanides, cyanides) where heating with strong acid causes cleavage of the C–N bond. Is it because resonance with the aromatic ring causes the nitrogen lone pair to be not basic?

You raise the examples of isonitriles and nitriles undergoing C–N bond cleavage via hydrolysis. That is true, but it is worth thinking about how this happens. Both isonitriles and nitriles are converted to amides first when reacted with aqueous acid. Now, amides will certainly be hydrolysed at the last stage of the peptide sequencing: you can see that in the image itself, as the amide bonds holding the polypeptide together are broken (so that the labelled residue can be detected).

However, amides behave quite differently from amines. The C–N bond you're asking about ($\ce{R-NH-Ar}$, Ar = 2,4-dinitrophenyl) is an amine, not an amide. The comparison to isonitriles / nitriles is therefore not relevant. Amines simply don't undergo typical $\mathrm{S_N2}$ reactions (quaternary ammonium salts do, but that's a different matter entirely), so the C–N bond doesn't get broken via hydrolysis. It is true that there is resonance with the electron-withdrawing dinitrophenyl group, which reduces the availability of the nitrogen lone pair, but this is actually irrelevant: even if that aryl group were just a methyl group, the conclusion would not be affected.

Note that this has nothing to do with the C–N bond strength, either. The C–N bond in an amide has partial double bond character, and is stronger than the C–N bond in an amine (which is a plain single bond). The question is not which is stronger, it is which has an available pathway for cleavage that doesn't involve too high an activation energy. Amides can be cleaved via a nucleophilic acyl substitution mechanism: although this is not easy to accomplish (you need strong acid and lots of heat), it is still possible. Amines, on the other hand, could conceivably be cleaved via a $\mathrm{S_N2}$ or $\mathrm{S_N1}$ mechanism. Neither is very favourable in this case (amines are very poor leaving groups, and the carbocation above is not stable at all, with that electron-withdrawing carbonyl group next to it).

Not the answer you're looking for? Browse other questions tagged organic-chemistry biochemistry amines or ask your own question.

4
Dinitrophenyl (DNP) derivatives of amino acids (specifically epsilon-DNP-lysine)
2
Why is the E2 protein important for protein degradation?
1
Why is phenol more acidic than aniline?
0
Feasibility of Electrophilic attack on the Nitrogen over the Phenyl ring of Aniline
50
Why isn't aluminium involved in biological processes?
6
Can aniline be made with the method described in Dr Stone?