Determination of energies in MO diagrams

How do we determine the relative placements of molecular orbitals in their diagrams? I understand that we can use point groups to find symmetry-allowed interactions between orbitals that we write on either side of the diagram.

What I don't understand is how we know that $\ce{a_1'^*}$ has a higher energy than $\ce{e'^*}.$ Perhaps there could be some argument from the geometry, but is this generalizable to any combination of symmetry labels? And furthermore, does this mean that any MO diagram can be derived entirely from theory, without looking up any energy charts or through spectrometry? 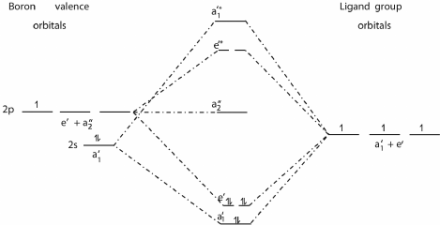 The figure in the OP's question seems to come from the article "A brief introduction to molecular orbital theory of simple polyatomic molecules for undergraduate chemistry students" by Baibich and Butler. In it (for the first example, the MO diagram of water), they say:

The students know that linear combinations of the central atom atomic orbitals and the LGOs have to be accomplished with orbitals with the same irreducible representations and that, in the four examples being considered in this paper, the orbitals have the energy requirements to combine. For more advanced students, some papers that deal with more detailed energy calculations are suggested.7,8 (Comment: it should be noted it is an approximation to state that a1 and b2 ligand orbitals have the same energies.)

In one of the cited papers (ref. 7, concerned with teaching MO theory), Lawson and Harrison state:

Without a calculation, you can not even predict the relative order of atomic orbital vs. bonding and antibonding MO.

They go on to state that in its simplest form, MO calculations are better at predicting bond lengths than dissociation energies, using the diatomics from $\ce{H2}$ to $\ce{Cl2}$ as an example:

Note that the calculated dissociation energies are often in poor agreement with experimental values and in particular in the MO theory $\ce{F2}$ and $\ce{Na2}$ are both predicted to be unbound and should not exist, while $\ce{Li2}$ is predicted to be marginally stable. Most textbooks do not discuss the direct predictions of MO theory as reflected in Table 3 but focus on the correlation between the bond order and the experimental $D_e$. How well the theory is doing should be gauged by comparison between the predicted and experimental $D_e$ values, not surrogate quantities like bond orders.

Finally, they caution that the energies of the unoccupied orbitals are difficult to interpret:

How powerful is the MO method?

[OP...] does this mean that any MO diagram can be derived entirely from theory, without looking up any energy charts or through spectrometry?

Yes, you do a calculation and get a diagram. You would probably start with atomic orbitals calculated elsewhere, and you would probably want to compare your results with experimental data, if available. One of the strengths of computational chemistry is that you can study molecules that have not yet been synthesized, or gain evidence that a putative molecule is unlikely to exist because it would be expected to fall apart accordning to your calculation. One of the weaknesses of simple MO theory is that the estimated energies are sometimes off by a lot, and that in some cases, the electron configuration (which comes down to the order of the molecular orbitals) is in conflict with experimental data.

To tack onto Karsten Theis's answer: Symmetry is inherently a qualitative tool, because it is binary. Two things (AOs) either have the same symmetry and can overlap, or they have different symmetry and can't overlap. But you can't say something is "more symmetric" and thus leads to "more overlap"; that would just be complete nonsense. So, symmetry tells you which lines to draw, but it doesn't tell you the extent of the overlap, i.e. how far up or far down the lines need to go to.

Formally, this is expressed in terms of integrals involving atomic orbitals $\phi_i$:

The energies depend on exactly what this number evaluates to, and to find that out, you need to actually evaluate this integral (and many others). Conceptually that's not hard to do, because we know how to write the AOs $\phi_1$ and $\phi_2$, and we (kind of*) know what the Hamiltonian $\hat{H}$ is. And it turns out that it isn't too hard for a computer to perform this integration. There are various software packages that will do this sort of calculation for you. But doing it by hand is not feasible, especially for any non-trivial molecule, and that's why if you limit your approach to a symmetry-based one, you can only ever get qualitative information out of it.

Note that I'm not trying to equate the energy of the MO with that integral above. The expression for the energy will (in general) depend on many of those terms. (Exactly how? Well, the MOs are linear combinations of the AOs, or at least we postulate that they are:

so the energy associated with the MOs is

Yeah, you don't want to do that by hand. And actually finding those coefficients $c_i$ is an entirely separate problem which involves similar considerations.)

* There is a "slight" problem, in that the electron–electron repulsion term in $\hat{H}$ depends on the electron distribution which in turn depends on the form of the MOs. But that's a technical detail. You can worry about it if you're actually writing computer software to do those integrals.

Not the answer you're looking for? Browse other questions tagged inorganic-chemistry molecular-orbital-theory orbitals symmetry or ask your own question.

5
For molecular orbitals, how is an energy of zero set or defined?

17
How to rationalise with MO theory that CO is a two-electron donor through carbon?
4
Lowering energy in molecular orbital mixing
24
Theoretical basis behind orbital correlation diagram for pericyclic reactions
14
Molecular orbital diagram and irreducible representations for dinitrogen
2
Total spin number 0 together with $B_2$ state - confusion
1
Molecular electronic state symmetry