I am told that because of the poor overlap between a chlorine atom and a carbon atom and chlorine's relatively high electronegativity, there is a strong partial positive character on the central carbon in an acyl chloride molecule.

This makes sense. I am then told that because of this high partial positive character created through the inductive effect of chlorine and oxygen and the poor overlap between chlorine and oxygen, the oxygen's lone pair(s) actually participate in a sort of resonance with the central carbon, thereby giving the C=O bond in an acyl chloride partial triple bond character.

Is this true? Also what exactly is this called? Backbonding?

The various resonance structures that one can draw for an acid chloride are shown below. 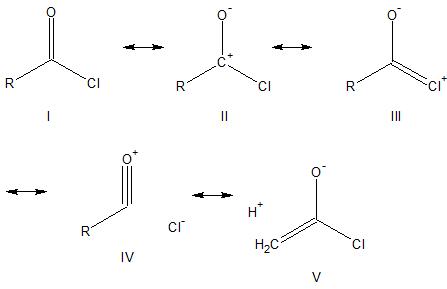 Structure IV, is the "triple bond" structure that you mentioned. The acylium ion ($\ce{R-C#O^{+}}$) is very stable, so structure IV does contribute to the overall description of an acid chloride. Note that the $\ce{C#O}$ bond in IV is not a real triple bond as the carbon remains $\ce{sp^2}$ hybridized, with the attendant 120 degree (non-linear) bond angles. I've also drawn a fifth resonance structure involving hypeconjugation. This is probably a reasonable structure as well since it places negative charge on oxygen and positive charge on the hydrogen. It also helps explain why hydrogens on the carbon alpha to a carbonyl have increased acidity.

Usually the term "backbonding" is used when electron density is transferred from one atom to another through the use of antibonding orbitals. See here for a better description. In resonance structure IV, the lone pair from oxygen is being shared with an empty carbon $\ce{sp^2}$ orbital, the one that had been used to bond to the chlorine. I've never heard that referred to as backbonding.

Not the answer you're looking for?Browse other questions tagged orbitals carbonyl-compounds or ask your own question.

13
Why is a ketone more nucleophilic than an ester?
1
Resonance stabilization and size of ligand atoms
0
What are the height and width of the large and small nodes of the sp3 hybridized orbitals of carbon and silicon?
4
Resonance of carbonyl
3
Chemical bonding based on hybridisation model