True or false: "If a reaction has a large negative value of ∆G, then it will be a fast reaction."

I recently took a Gen. Chem. 2 exam that contained this question. I answered false, as I knew that thermodynamics and kinetics are separate matters. My professor said the answer is true. I pressed him on it, citing a specific portion of our textbook that stated that the spontaneity of a reaction must not be conflated with the reaction rate. He admitted that it's true that a highly negative ∆G value does not necessarily imply that a reaction will be fast, but he said that that's usually the case, so I should have answered "true". This strikes me as absurd, not only because it's not a reasonable interpretation of a true/false question (they're supposed to be interpreted strictly, and if there's no qualifier like "generally" or "typically", then an if/then proposition should be treated as a "necessarily true" claim), but also because most students probably answered "true" because they did conflate spontaneity with reaction rate, which is something the textbook specifically warned against.

My professor also sent me the following via email:

"Please note that delta G combines all the properties of thermodynamics, which includes kinetics. Delta G has two components. Delta H (enthalpy) and Delta S (entropy). A large negative delta H means the reaction is highly exothermic. A large positive delta S means the product "randomness" is highly favorable, the system wants to happen even if enthalpy isn't high. I know of no system with these two feature that isn't fast. Note: rust (iron + oxygen going to rust) is highly exothermic, but the delta S is negative (solid and gas going to a solid), and that's why the reaction is favorable but slow."

I was surprised by this, as it directly contradicts what our textbook says on the matter. My understanding is that the ∆G equation contains only thermodynamic state variables and simply expresses the magnitude of thermodynamic potential. I see nothing in the equation that could convey information about the rate at which a process happens.

I would greatly appreciate not only theoretical comments on this, but also some specific examples of reactions with "large negative ∆G values" that are not "fast". (The inherent ambiguity of the terms "large" and "fast" here also seems to be a problem.)

There is the Bell–Evans–Polanyi principle stating that "the difference in activation energy between two reactions of the same family is proportional to the difference of their enthalpy of reaction" (from the linked Wikipedia page). Looking at the Arrhenius equation, it is clear that this should lead to an increase in reaction rate with an increase in reaction enthalpy. Your professor might have this in mind, although admittedly he does not mention that explicitly.

Acutually, as far as I can tell the work by Bell, Evans, Polanyi and co-workers from the 1930s and 1940s can also be used to state that there is no universal relationship between thermodynamics and kintics valid over all reaction types. However, it is also apparently not true that there never is any relationship, as it is often claimed. As usual, the real world is more complicated than we are taught in basic university courses. I must leave the detailed reading of the papers to you – I could only have a quick glance – but below are some possible sources that I extracted from this paper. As it is often the case, the original papers from back in the days appear to be a rewarding read.

Concerning your question, the entry on Bell–Evans–Polanyi principle in the IUPAC gold book is quite informative:

The linear relation between energy of activation ($E_\mathrm{a}$) and enthalpy of reaction ($\Delta H_\mathrm{r}$) sometimes observed within a series of closely related reactions.

As you can see, this statement is far from making any general claims.

This is the complete question at the GenChem 2 level (found posted on Chegg): 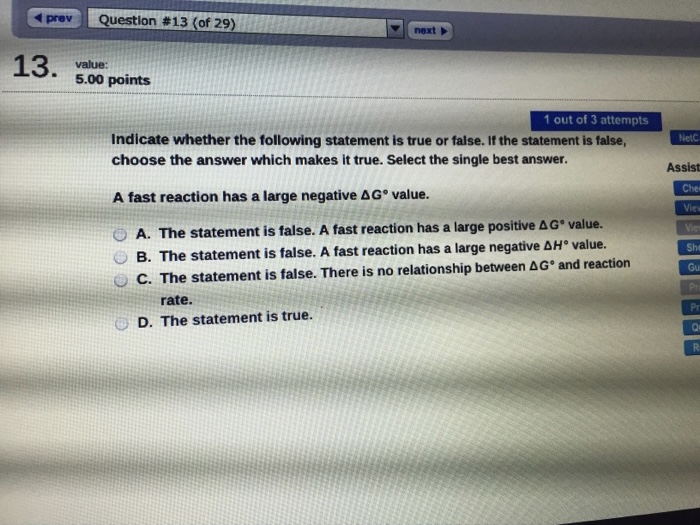 The correct answer is C. Of course, there is a relationship between most concepts, but not one where the speed of a reaction would reliably predict the sign of the standard Gibbs energy. Also, fast reactions is a fuzzy concept. A given reaction will be faster or slower depending on reaction conditions. For any fast reaction, you can probably find a faster one, but does that make the other reaction slow?

Not the answer you're looking for? Browse other questions tagged thermodynamics kinetics free-energy or ask your own question.

13
What exactly is a spontaneous reaction?

2
Suggest a method, other than spectrophotometry, for determining the reaction rate
7
Truly Understanding the Second Law of Thermodynamics and Entropy
8
When is a reaction reversible?
7
Relation between Gibbs energy and net reaction rate
12
Is adsorption exothermic, and if so, why?
4
Why does spontaneity of a reaction depend on temperature?