There are two different groups bonded to each terminal C in the C=C=C system, and there is restricted rotation about the C=C=C. So why doesn't it show cis-trans isomerism?

The most common answer I get for this is that the set of bonds C-CH3 and C-H on C1 and C3 in the C=C=C are not in the same plane. Why do they have to be in the same plane for the exhibition of cis-trans isomerism?

The (cis)/(trans) nomenclature (or, more universally applicable, (E)/(Z) nomenclature) works fine for isolated and conjugated double bonds. In the case of 2,3-pentadiene, however, where double bonds literally are adjacent to each other, you have a cumulene. As a result, the mutual orientation of two terminal methyl groups is close to perpendicular.

To put things in perspective (literally), build a model with a model kit:* 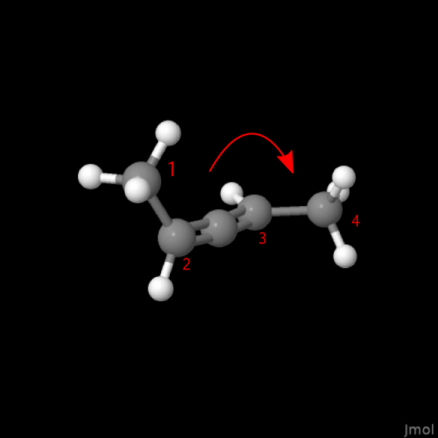 and apply the nomenclature for axial chirality instead. You assign the methyl groups a higher priority than the hydrogen atoms (CIP rules), then, while looking along atoms (2) and (3), the «rotation» along the sequence 1 -> 2 -> 3 -> 4 is clockwise, thus it is (R)-penta-2,3-diene.

As highlighted by a comment by @user55119, there is some conceptual overlap between axial chirality and helical chirality. As a result, beside the notation by (R) and (S), the description of cumulenes may rely on descriptors (P, as in plus) and (M, as in minus) instead.

*In case you do not have access to a model kit, you may paste the following SMILES string (a structure description a [dedicated] computer program understands) CC=[C@@]=CC as input for molcal.org. Don't mind that the angle enclosed by the methyl groups differs from the one you get with a physical model kit (example), focus on the relative orientation.

Let me speak of geometrical isomerism as such the discussion is more general.

Geometrical isomerism of the cis-trans / E-Z type can happen about a plane containing two atoms each with two different substituents (though in cyclic compounds the latter requisite is merely formal). In fact the two identical substituents or the pair with high priority can be at the same or at the opposite sides of that plane, leading to different compounds.

If such a plane does not exist, or better if there are not such two atoms, there are not geometrical isomers (as properly intended*).

*Other isomerisms lead to different geometrical arrangements of atoms and moieties in molecules, of course. This often confuses newbies. The term geometrical in geometrical isomerism solely refers to the arrangement discussed above.

Not the answer you're looking for? Browse other questions tagged stereochemistry isomers cis-trans-isomerism or ask your own question.