What does Partial charge means in Dipole Dipole forces [duplicate] 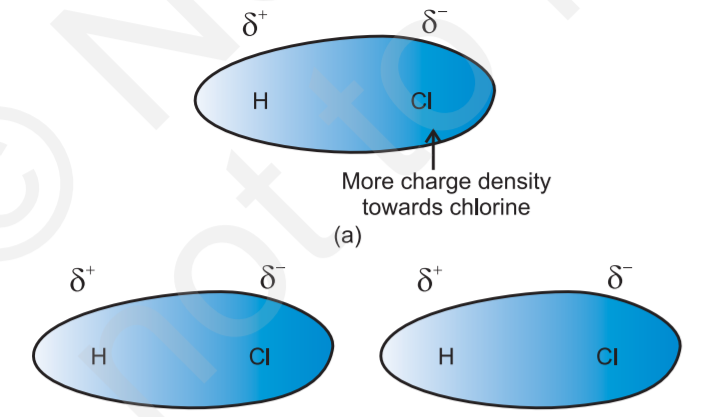 I want to know how partial charges can exist as it would go against the quantization of charge?

To understand where partial charges come from remember that electrons are not located in one specific place (Heisenberg!) but spread around in a cloud. In molecules, those clouds are called molecular orbitals which are more complex in shape and distribution than the atomic orbitals in isolated atoms.

In simple molecules with different atoms those orbitals are not, in general, symmetric around the two atoms. So in hydrogen chloride, for example, the electrons in the bonding orbital are more likely to be found near the chlorine. The bond still only contains 2 electrons each of charge -1. But the probability weighted distribution shows more negative charge around the chlorine.

So the partial charge is a function of the probability distribution of electron density which is dependent on the 3D shape of the bonding orbital. It isn't a violation of quantisation of charge, just a consequence of the quantum mechanics of bound electrons which can't be nailed down to being in a single specific place because of the uncertainty principle.

From the outside, this looks like a dipole with a partial charge and that simplification is good enough for most systems and avoids excessively complex quantum mechanical calculations that would add little to the picture.

Very good question but keep in mind that partial charge concept is a gross oversimplification. The very first sentence on Wikipedia on partial charge Partial charge is not fully correct either. Consider the partial charge as a book-keeping "number". Just like the oxidation state concept, a "partial" charge can be estimated for a diatomic molecule AB, on the basis of electronegativities

where, $\delta_A$ is the partial charge, $G_A$ is the group number, $L_A$ is the unshared electron number on A, B is the number of bonding electrons, and $\chi$ is the electronegativity value proposed by Allen. Allen avoids the term "partial charge" and calls it this number "Lewis-Langmuir Atomic Charges." So don't treat this number as a fraction of an elementary charge.

The following references will help:

And finally if you are interested in who came up with this $\delta$ symbol see...

Knowing molecules to be composed of two or more “point” positive charges in relatively fixed positions, imbedded in a diffuse cloud of electrons, one can recognize that the assignment of partial charges to the individual atoms must at best be only a deliberate simplification. It is indeed an attempt to describe an exceedingly complex system in terms useful toward reaching a practical understanding of the molecule.

All these physical data, when considered together with the properties of compounds, strongly support the conclusion that the condition of a combined atom does indeed depend on its environment, which to a large and usually dominant extent results from electronegativities. One may call this contribution “partial charge” or by any other name, as long as its true significance is clearly understood: “Partial charge’ is a quantitative estimate of the relative extent to which differences in electronegativity of the atoms before compound formation have altered the electronic field about the nucleus of an atom in a compound. In the following discussion it will become apparent that as an index of the condition of a combined atom, partial charge provides a uniquely useful and satisfactorily reliable basis for explaining much of chemistry

Not the answer you're looking for? Browse other questions tagged physical-chemistry intermolecular-forces dipole or ask your own question.

8
Does partial charge violate the law of quantization of charge?

8
At what frequency does a non-polar molecule acquire a dipole able to participate in London Dispersion forces?
16
Can nonpolar molecules exhibit dipole-dipole forces?
1
Intermolecular forces between carbon dioxide and water
0
What would be the intermolecular forces between the molecules of methanetetrol?
5
When non-polar particles interact through dispersion forces, how fast does a temporary dipole induce a dipole in the neighboring molecule?