Why do radical inhibitors inhibit a reaction by creating a "more stable" radical, but for monohalogenation, we WANT to form the most stable radical?

However, when deciding to abstract a proton to create the major mono-halogenated product, we must choose a proton that has will create the most stable radical. In another words, the weakest C-H bond is broken first to form the most stable radical, which reacts to form the major mono-halogenated product. To me, this implies that greater radical stability increases rate of the monohalogenation reaction. And this contradicts the idea of the "less reactive, more stable radical" in radical inhibitor mechanism. 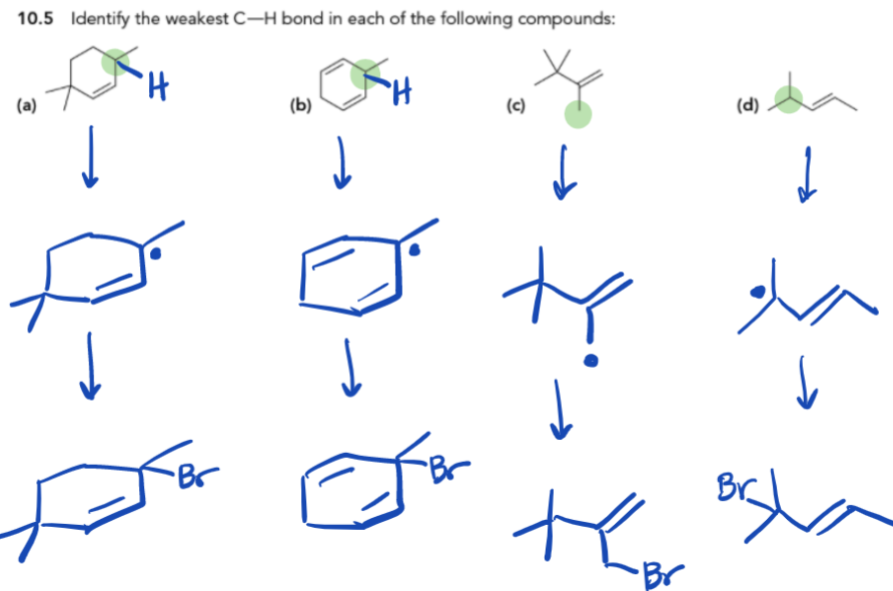 What am I missing? Any help will be appreciated.

Radical inhibitors like dihydroquinone ($\ce{H_2Q}$) are quenchers which inhibit the radical reaction by quenching an active radical ($\ce{R^.}$) to $\ce{R-H}$ and itself gets converted into a resonance stabilized non-reactive monohydoquinone ($\ce{HQ^.}$) radical species. Once the $\ce{R^.}$ gets converted to $\ce{R-H}$ the reaction stops as the formed radical, $\ce{HQ^.}$ is not reactive enough to participate in the reaction further.

But in the case of mono-halogenated product formation, we are making a reactive intermediate species, $\ce{R^{.}}$ in the first step which will react further with the halogen ($\ce{Cl_2}$) in the second step to give the mono-chloro derivative ($\ce{R-Cl}$). The first step, i.e., $\ce{R^.}$ formation is the slowest and rate determining step, therefore activation energy for the radical intermediate formation gets lowered when more stable radical is formed (See: Hammond's postulate). Hence the rate of mono-halogenated product formation will increase when more stable radical is formed in the first step of the reaction which will give rise to major product if other possibility of hydrogen abstraction exists.

Not the answer you're looking for? Browse other questions tagged reaction-mechanism stability radicals halogenation or ask your own question.

3
Why does carbocation stability increase in the order 1°, 2°, 3°?
4
Why are tertiary alkyl halides obtained in higher yield than secondary or primary during free radical halogenation of alkanes?
5
Formation of azobenzene from nitrosobenzene and N-hydroxyaniline
1
Why are radical intermediates are more stable on tertiary carbons?
1
Acid catalysed dehydration of alcohol with a bicyclo group
2
Chain transfer in polystyrene synthesis
6
The major product of radical halogenation: Why is it a halogen attached to a primary carbon and not a tertiary carbon in the given example?