Essentially, I am not sure whether driving force equations (such as V-E_{ion}, based on Nernst equation) care about how ions are distributed locally within a cell.

I have a situation when we want to calculate the ionic driving force through an open voltage-gated channel in a cell. There is membrane potential and also chemical gradient, so the driving force depends on both. Typically, this would be represented as V-E_{ion}, i.e., the membrane potential minus the reversak potential of that ion (calculated using the Nernst equation) or using the GHK flux equation https://en.wikipedia.org/wiki/Goldman%E2%80%93Hodgkin%E2%80%93Katz_flux_equation

Now, both of these assume (I think) that the extracellular and intracellular ionic concentrations are homogeneous within each space. The issue is that this is clearly not the case in our cells - the intracellular concentration is higher around the open channels when they are open (because of influx via these channels and also intracellular release of the same ion in that area). When we calculate the driving force, should we base it on the average ionic concentration within the cell (ignoring the locality), or should we calculate it based on the gradient between extracellular and the near-channel-intracellular zone only? (one problem with the latter idea is that the driving force becomes highly dependent on the size of the near-channel compartment, as that affects the local concentration massively).

A visual illustration (for various sizes of the near-channel compartment - there is no ground truth how large that is, necessarily) would be this: 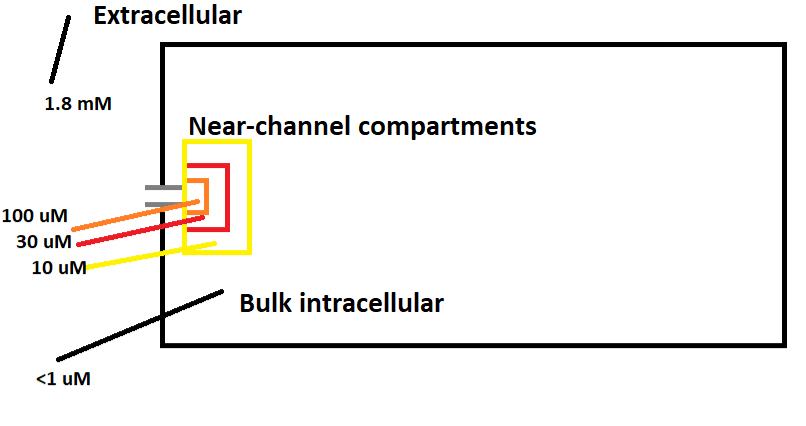 Browse other questions tagged physical-chemistry or ask your own question.

8
Does potential difference or current drive electrolysis?
5
Express the maximum work from a voltaic cell
0
How to accurately calculate the electromotive force for various conditions in a salt water battery?
8
How should I think about potential energy surfaces for reactions of complex systems?
1
How can I model cellular membranes in terms of topology?
2
How to calculate membrane potentials?
2
How does precipitate affect cell potential?
2
Intuition for relation between electrode potential and reaction quotient