Do benzene and hexane form an ideal solution?

My teacher said that benzene and hexane do not form an ideal solution (with reference to Raoult's law) but did not explain any reason for it.

My approach: Cyclic hydrocarbons (benzene here) have higher van der waal's forces of attraction than straight chain hydrocarbons (hexane here) because of shorter intermolecular distances and greater surface area. So when hexane goes in between benzene, there will be weaker intermolecular bonds, causing positive deviation from the Raoult's law.

A picture is worth a kiloword (1000 words). Then you can write 2 kilowords explaining the picture. But data are paramount, so here is a picture (Ref 1) : 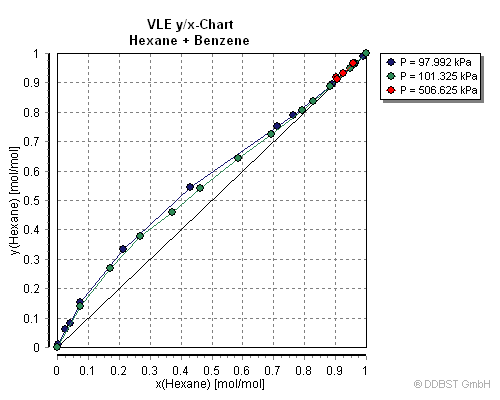 According to the picture, which has three complete lines and one partial line, the straight line going from 0,0 to 1,1 designates the molar composition of the liquid (the independent variable). Then the two curved lines above it are the connected dots of measurements of the vapor-phase composition at approximately 1 atmosphere pressure and the boiling point of the mixture (which is varying, but called constant because it is uniformly the boiling point). The data were obtained by boiling the mixtures and taking vapor samples in an equilibrium still (Ref 2).

All the colored dots lie above the straight line, indicating that the vapor is enriched in hexane, or the liquid is impoverished in hexane, so hexane-benzene attraction not only does not keep the hexane in the liquid, but forcing hexane into benzene seems to be somewhat unattractive.

The partial line (a few red dots between 0.9, 0.9 and 1,1, at ~5 atmospheres pressure is about 60ºC hotter than at 1 atm, and does not add anything more to the conclusion. It was shown that enrichment of the vapor (in hexane) ceased at about 3.5 mole % benzene (Ref 2). (Note than on the graph, 0,0 corresponds to all benzene, which has the higher boiling point (80.1º vs 69º for n-hexane)). It had been thought that hexane and benzene formed a constant-boiling mixture at ~2.5% benzene in hexane, but this was disproven. It's just very difficult to get all the benzene out of n-hexane.

In a way, this suggests that there is an interaction between benzene and n-hexane, but only at very low concentrations of benzene, perhaps not well described by Van der Waals interactions. Maybe a little bit of benzene causes the n-hexane molecules to rearrange and use up their packing space more effectively.

Not the answer you're looking for? Browse other questions tagged solutions gas-laws vapor-pressure or ask your own question.