α-cleavage of 1-pentene in EI-MS

I am studying the fragmentations in EI-MS, and this is the spectrum of 1-pentene. 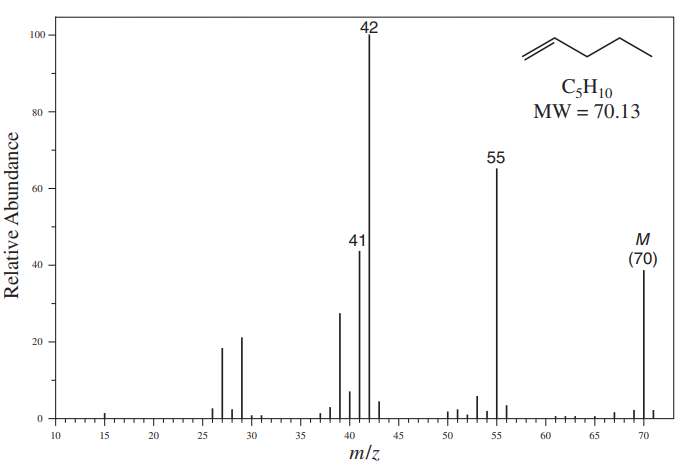 The textbook says: The allyl carbocation (m/z=41) is an important fragment in the mass spectra of terminal alkenes and forms via an allylic α-cleavage.

First of all, at the initial ionization event, one electron draws off from π-orbital. In the below image, one can expect the 2nd carbon will bear the positive charge according to the Stevenson rule.

But in this case, I can't imagine the α-cleavage mechanism. Instead, if the first carbon bears a positive charge, I can draw the mechanism like this:

The main issue is that the structures that are named 1° carbocation and 2° carbocation in the question are not different structures. As a general rule in mass spectrometry, ionization is postulated to occur from the highest occupied molecular orbital, which is usually for alkenes the $\pi$ orbital. Removing an electron from a $\pi$ orbital leads to a singly occupied molecular orbital (SOMO) which is formally a singly-occupied $\pi$ orbital (imagine a double bond but only half occupied), for which there is no sensible Lewis representation. The usual way to represent in the Lewis formalism this $\pi$-type SOMO is to represent it as a resonant structure between the structures that are called 1° carbocation and 2° carbocation in the question, such as below:

So the short answer is that there is no reason, in general, to apply the Stevenson rule to these, as they are not two separate structures but only a single one.

There is nevertheless, for the specific case of 1-pentene an interesting twist. Leif A. Erikson et al. have shown through calculations and ESR experiments in cryo-matrices that the 2-pentene cation follows the general rule given above. On the other hand, the 1-pentene cation has an electronic structure for the SOMO which also involves delocalization of the orbital up to the adjacent sp3 carbon atom. This also translates in a shortening of the C(sp2)-C(sp3) bond upo,n ionization. In this instance, the Lewis formalism cannot be used to correctly represent the SOMO, but it helps in rationalizing the preferential break of the $\alpha$-bond.

The suggested formation of the allyl cation is not a contradiction of the Stevenson rule.

«What is the statement of Stevenson’s rule?

When a fragmentation takes place, the positive charge remains on the fragment with the lowest ionization energy.»

As suggested by you, a plausible mechanism for the fragmentation of 1-pentene in a mass spectrometer is the homolysis yielding two radicals, one of them the allyl cation:

10
Why does alpha cleavage occur?