Why is one lobe of an sp3 hybridized orbital smaller than its other half?

A hybrid sp3 orbital is drawn with one lobe smaller than its other half, the latter which is of equal size when drawing the p orbital. Why is it so?

When combined at a given atomic center, any two atomic orbitals add in a vectorial manner. For example, consider the orbital $\phi$ defined by $\ce{p_{x}}$ and $\ce{p_{y}}$ atomic orbitals as 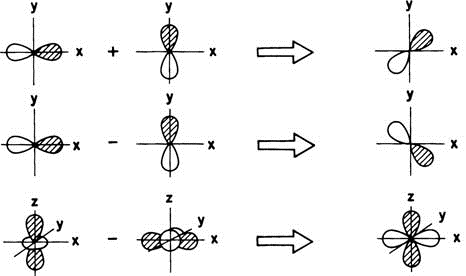 The mixing of atomic orbitals with different angular momentum quantum number is also controlled by a vectorial addition and leads to various types of hybrid orbitals some examples of which are shown here: 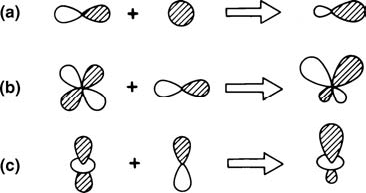 'p' orbital has an 100% p-character , but 'sp3' has 75% p-character and 25% s-character in addition . Therefore, it is the presence of the s-character which gives one of the lobes a kind of spherical shape , thus, making it look comparitivly smaller as to the other lobe.

Not the answer you're looking for? Browse other questions tagged orbitals hybridization valence-bond-theory or ask your own question.

6
Shape of sp³ hybrid orbital
3
What is the type of orbital depicted in this diagram?

4
Are the p orbitals of the biradical dioxo compound in the HOMO perpendicular to the plane?
7
What is the hybridization of terminal fluorine atoms in molecules like boron trifluoride?
1
Why does the size of hybrid orbitals vary as sp³>sp²>sp?
0
Resemblance of molecular orbital formed by mixing of s and p orbitals to hybridised sp orbital
2
Orbital size of Carbon and Oxygen in Methanal
0
Confusion about hybridization terminology