Do the phosphoester and glycosidic bonds of dNTPs increase thermal stability?

A while ago, I provided an answer to a question on Biology.SE concerning the half-life of dNTPs under PCR conditions. At the beginning of my answer, I give a qualification:

Caveat: ignoring the bonds between the different parts of dNTPs likely misrepresents the stability of the intact molecule, given that the covalent bonds between the nucleobase, sugar, and phosphate pieces each have their own relative stabilities.

How wrong is my approach to model the stability of the whole dNTP by the stability of its pieces? To what extent do the covalent bonds between the constituent molecules (indicated with red arrows below) contribute to the thermal stability of the dNTP as a whole? What is the organic chemistry explanation (resonance?) for why the intact molecule would be more (or less) stable than its least stable constituent in a neutral-buffered aqueous solution at 95 °C? 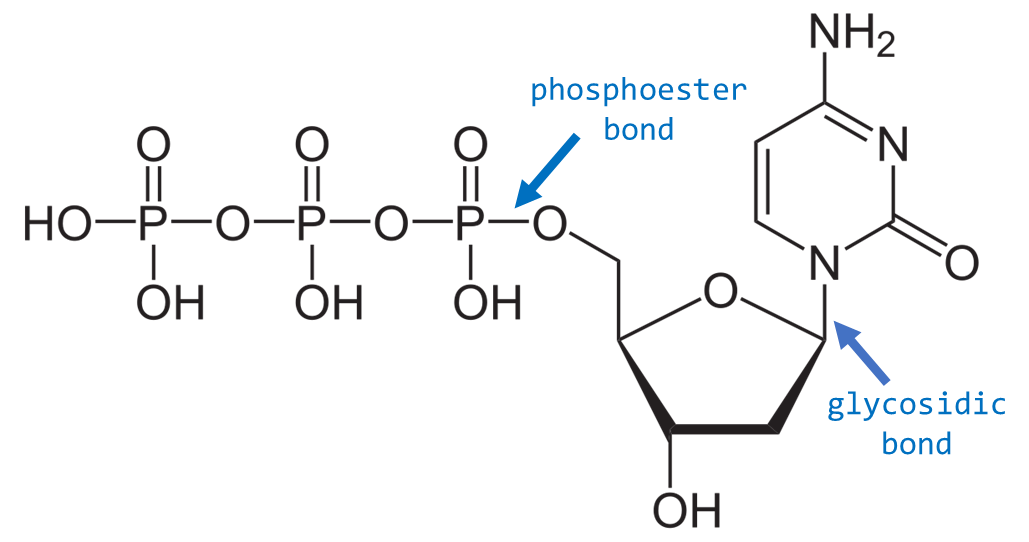 You don't suggest a mechanism of degradation, or a degradation product.

Per the linked Biology.SE question, I'm interested in any degradation mechanism that would lead to the dNTP being no longer be polymerizable by DNA polymerase. As I understand it, the incoming dNTP base-pairs (hydrogen bonds) with the template, allowing the ribose 3' hydroxyl group to attack the triphosphate group on the incoming nucleotide, yielding a phosphodiester bond and a pyrophosphate leaving group.

So, any mechanism that results in a product that (1) interferes with hydrogen bonding associations of the dNTP with its template or (2) prevents subsequent phosphodiester bond formation is fair game. Even though deamination of dCTP may inhibit specific polymerases, my understanding is that dUTP can still be incorporated by the polymerases used in PCR, so that specific reaction is not within the scope of my question.

There are two classes of errors that such an approach introduces. First, it is possible that the pieces have different reactivity in the context of the complete molecule. Second, this approach does not consider breaking the molecule at the connections.

Do the connecting bonds stabilize the pieces?

The glycosidic bond prevents the ribose ring from opening via the usual linear/hemiacetal pathway. In the linear form, the aldehyde could be oxidized to a carboxylic acid or reduced to an alcohol. In the ring form, this is not possible. The triphosphate group on its own could lose the alpha or the gamma phosphate in the same way (it is a symmetric species with anhydride linkages on both ends). Once it forms an ester, this would change the reactivity of the anhydride linkage on the alpha carbon side. Once the nucleobase is connected to the sugar, the linking nitrogen no longer has a protonated and deprotonated form. This might also change some degradation reactions.

Are the connecting bonds part of degradation mechanism?

The glycosidic bond is subject to hydrolysis (see e.g. https://www.ncbi.nlm.nih.gov/pmc/articles/PMC523769/pdf/nar00047-0143.pdf). Once the glycosidic bond is gone, the sugar will potentially also be degraded. The phosphoester bond is cleaved in vivo by enzymes; non-enzymatic hydrolysis is possible under harsh conditions (see e.g. http://www.tud.ttu.ee/im/Tonu.Reintamm/shabarova/4.5.html).

So, any mechanism that results in a product that (1) interferes with hydrogen bonding associations of the dNTP with its template or (2) prevents subsequent phosphodiester bond formation is fair game.

What is the organic chemistry explanation (resonance?) for why the intact molecule would be more (or less) stable than its least stable constituent in a neutral-buffered aqueous solution at 95 °C?

The explanation would depend on the specifics (conditions during the PCR - pH, presence or absence of divalent cations, other additives, which nucleotide are we talking about). Resonance is not the core explanation of the effects because the linkages are pretty much single bonds. If we are just substituting -OH with -OR or -NH with -N-C..., there is no drastic effect on the aromatic systems and double bonds in the constituents.

Not the answer you're looking for? Browse other questions tagged organic-chemistry biochemistry stability or ask your own question.